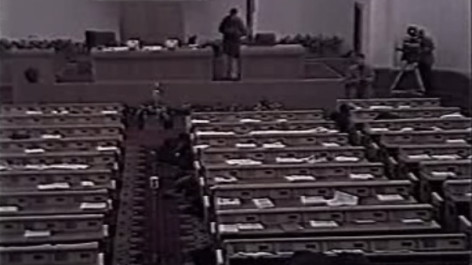 Even 18 years after the terrorist act of October 27, when an armed attack occurred during a question-and-answer period in the parliamentary meeting hall, to which the country’s prime minister, parliamentary speaker, and an additional six state representatives fell victim, many of the journalists there that day say that it was a stress from which they have never fully recovered.

Aravot.am editor, journalist Anna Israyelyan says even two days after the incident, when she entered the parliamentary hall, she felt the smell of gunfire in the air.

“Naturally, there was no such thing before. Indeed, it was a huge stress, and definitely no one had been killed near any of us or we hadn’t been in such a frightful situation [before]. At that moment, of course it seemed to me that I kept myself in a very calm and balanced state, I even replied to questions, but later, when I was looking at the recordings, I saw that my eyes were wide open like saucers,” recalls Israyelyan.

Respublica Armenia journalist Gohar Sargsyan was also covering the parliament’s activities that day. She says that a charged atmosphere prevailed, and what she went through 18 years ago she experiences every time when something in a room drops on the floor.

“I now jump from every bang. In the National Assembly briefings room, where meetings happen, if a video camera or audio recorder falls, those journalists who were in the parliament hall on October 27, the day of the shooting, jump at once. What we experienced was a horrible thing and we continue to live through it, all of us,” says Sargsyan.

Often the stresses, depression, and anxiety become fateful, and many previously engaged in journalism abandon their preferred profession.

“Sitting among us that day in parliament were quite young female journalists. They were younger than my children even, and when we were all lying down on the ground, I saw how those girls’ legs were shaking. After that ill-fated incident, some of them never again entered the parliament building and abandoned journalism,” recalls Sargsyan.

Israyelyan is also convinced that the unresolved stress has been living with them for years.

What should a journalist do in such situations? Gohar Sargsyan says: “Keep your dignity, don’t make noise, don’t cry. Next to us were also people who were shouting, making careless movements. It’s necessary to maintain great vigilance; in such situations, every move, every word becomes important. No one was expecting it, but in such cases, you have to be able to collect yourself and take control of yourself.”

“That is, Ruzanna was able to act quickly. Seems trivial, but very important; every move and sound at that moment was significant,” recalls Israyelyan.

If conflict reporters wear bulletproof vests or helmets and know the danger that awaits them, then journalists working in civilian life find themselves in such situations unexpectedly.

“Naturally, were were absolutely defenseless, and I have to use every opportunity to say how Respublica Armenia reporter Gohar Sargsyan just 15–20 minutes after what happened had the courage to call over Nairi and ask him to release the journalists and parliamentary staff members,” recounts Israyelyan.

Sargsyan remembers she was not afraid at that moment; she thought the shooting had stopped. She stood up and, calling Nairi Hunanyan to her, suggested journalists be allowed to leave the room.

“Watching the recordings afterwards, I realized that I got up under the shooting and spoke with him. I recognized him as a journalist. From the rank and file, I heard them say ‘Nairi,’ and at that time there were two journalist Nairi’s. I couldn’t see him from my position on the floor, but when they said ‘Hunanyan’… now I don’t even remember how I got up from my lying down position, there were horrible profanities, the dead…  I was only thinking about getting out of the room…,” says Sargsyan.

Nevertheless, analyzing the situation from the distance of time, the journalist admits that if, god forbid, she found herself in a similar situation a second time, neither she would leave the room nor would she get the journalists out.

“I blamed myself a lot for that move. I don’t think that it was wrong — among us were also people who were ill, who were very scared — but, all the same, I would stay inside to fulfill my duties as a journalist. I put the matter of my life aside. But you don’t become like that while working as a journalist — a person is either born like that or is not,” says Sargsyan.

Israyelyan finds it hard to imagine that it’s possible to fully teach and model with maximum accuracy the gamut of emergency situations journalists may find themselves in.

“Even till today it’s not clear to me, for example, should we have stayed in the room, continuing to cover [the events], or was it right what we did: we left and tried to do that from a safe distance? After October 27, we were criticized, that we didn’t do the right thing, that we didn’t stay with the hostages. That question really caused me anxiety. I would contact my colleagues abroad; they would say, of course you have to first of all address your safety and continue to report from a safe location,” says Israyelyan.

According to her, the issue is not a matter of regulations, but rather a journalist’s personal choice; it’s also somewhat a matter of the journalist being ready for self-sacrifice.

“It’s not easy to say that they wouldn’t fire again; whoever has been in that room will understand me, that Nairi at least in the initial moments was in an irritated and uncontrollable state, that there was no guarantee they wouldn’t shoot again and there wouldn’t be new victims. A man who has entered and is shooting left and right, what guarantee is there that he won’t shoot you too? I think giving advice or developing some rule of conduct in this matter is extremely difficult. This is a matter of every journalist’s personal choice, how to act in this case. There are definitely no unambiguous solutions,” says Israyelyan.