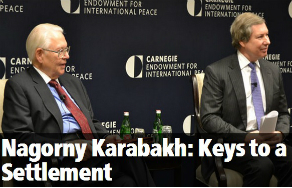 OSCE Minsk Group US Co-Chair, Ambassador James Warlick’s remarks under the rubric “Nagorny Karabakh: Keys to a Settlement” at the Carnegie Endowment for International Peace evoked a vehement reaction in Armenia.

First, Warlick’s tweet about the speech was sufficiently discussed in social media. Not surprisingly, people in Armenia were particularly displeased with the statement “the occupied territories surrounding Nagorno-Karabakh should be returned to Azerbaijani control” in the ambassador’s remarks.

Then, US Ambassador to Armenia John Heffern added fuel to the fire by tweeting the statement about the territories and citing Ambassador Warlick.

Presented below are the opinions of members of the Armenian media on the local media’s reaction to the US diplomats’ statements.

Ambassador Warlick’s remarks were interpreted in a very unique way in the Armenian press: quite appropriate to our psychology and the atmosphere in the country today. Once again, any information becomes an occasion for a conflict between the “-philes” and the “-phobes”. The press and social networking sites were full of arguments and mutual accusations of those who are pro-Russian and those who are pro-Western.

But what astounded and concerned me more was that the critical vortex referred more to the source of the information and not to the information itself. This is roughly the same as blaming the sports commentator for your favorite team’s defeat.

It seems as if our society prefers to be happy in ignorance and not be informed. There’s nothing illogical in this: the public doesn’t want to assume responsibility. It’s easier to profess ignorance — to later accuse others of treason.

There were many attempts in the press to contrast the OSCE Minsk Group co-chairs with each other; meanwhile, the OSCE Minsk Group’s statement proved that, in fact, there are no fundamental differences. This once again showed that the Karabakh conflict settlement process is covered hastily and not professionally.

The number of experts who are acquainted with the ins and outs of the conflict settlement can be counted on one hand; meanwhile, dozens of people comment on the process. The experts and commentators who are aware of the “behind-the-scenes” of the process wouldn’t have tried to contradistinguish the co-chairs, but would simply have compared Warlick’s speech with the OSCE Minsk Group documents.

As a rule, coverage of the Karabakh issue in the Armenian media turns into a race for patriotism. I can say with regret that, as happens in such cases, this time too news media addressed Warlick’s speech without even being acquainted with it.

Many from those brief remarks that US Ambassador Heffern made on Twitter attributed the statement on occupied territories to him. It’s obvious that those who commented on it hadn’t bothered to read Warlick’s speech till the end.

Recently, everything — whether it be Eurovision or a position on the Karabakh issue — becomes an attempt to distinguish between this is the position of our friend Russia and this, that of the Western world that is incompatible with our psychological make-up. And this topic, as well, was presented in this light.

Discussions of Warlick’s statement fit within the framework of the two trends in Armenia: many find that the ambassador said nothing new, but rather repeated the Madrid Principles in order to spark negotiations, while others say that the US basically gave an ultimatum to Armenia, which has chosen the pro-Russian path of development.

Half the news media blamed the US; the other half, the Armenian authorities, who renounce the Madrid Principles.

Personally, I think that the ambassador once again publicized the principles to settlement, so that Armenia finally abandons the Madrid Principles. But Minister of Foreign Affairs Edward Nalbandian, in fact, said that Armenia accepts the Madrid Principles as the groundwork for further negotiations and even blamed Azerbaijan for not accepting them.

Discussed were mainly two points of Warlick’s statement: surrendering two-thirds of Karabakh to Azerbaijan and including a peacekeeping operation. But as RA Deputy Minister of Foreign Affairs Shavarsh Kocharyan said, there isn’t agreement even on these two points.

Basically, Warlick truly succeeded in starting a discussion in Armenian society and forcing official Yerevan to express its position.

As in many other cases, the US ambassador’s statement was presented in the Armenian media based on political orientation: under both a positive and a negative light.

It was quite distinctive that statements were made by the OSCE Minsk Group US Co-Chair and the Russian and US ambassadors to Armenia at the same time — though the main political or public circles focused on the statement of either one or the other.

There was no analysis on the topic in the media. What there was was the reflection of statements made by political and public circles. There was no analysis tied especially to the Key West negotiations.There also wasn’t Karabakh’s official position, as well as the opinion of ordinary people living there.