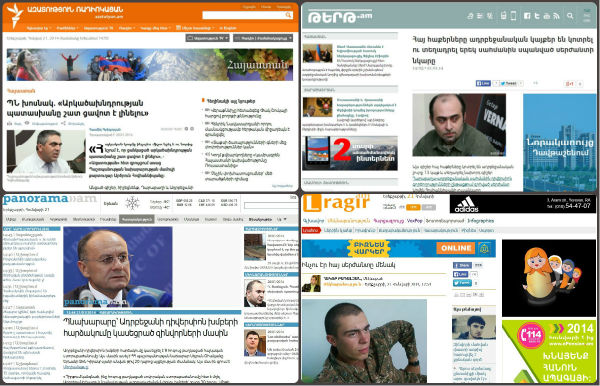 The settlement of the Karabakh conflict acquired new nuances in the Armenian press on Jan. 20, after the incursion on the Karabakh-Azerbaijan “contact line”.

After the war, one could come across patriotism and heroism only in propagandist news articles. Moreover, these concepts had depreciated to such a degree that they were seen in quotes in many news articles.

The press brought back the idea of natural patriotism with the Jan. 20 incident. The safety of life and natural rights again became an evaluation criteria and starting point.

Over the past few years, Armenian media has undergone numerous transformations under the influence of different theories.

On one hand, the concept of Western journalism, which implies objectivity, parity, and the inclusion of opinions of all sides. On the other hand, the Soviet-Russian propaganda traditions, which include brutal agitprop methods.

Beneath these two and smaller currents, Armenian media came close to losing the ability of evaluating everything from the point of view of its own and sound interests.

Those who tried to adhere to the Western principles of objectivity, at one point encountered the pattern of artificial parity. While those who carry out brutal propaganda don’t enjoy readers’ trust.

Numerous false, so-called political or humanitarian barriers in the Armenian press have neutralized the principle of natural interest. When one writes about his own — personal, public, or national — interests, it’s completely understandable.

It’s the opposite that’s not understandable.

The death of Sergeant Armen Hovhannisyan has changed the panorama of the Armenian press. The economic dispute between the second president [Robert Kocharian] and the prime minister [Tigran Sargsyan] seemed quite petty in light of the incident and the soldier’s actions.

So-called political negotiations also became trivial. The papers had made this news their headline story. Everyone understands that safety and the right to life are not false categories — the rest is derivative.