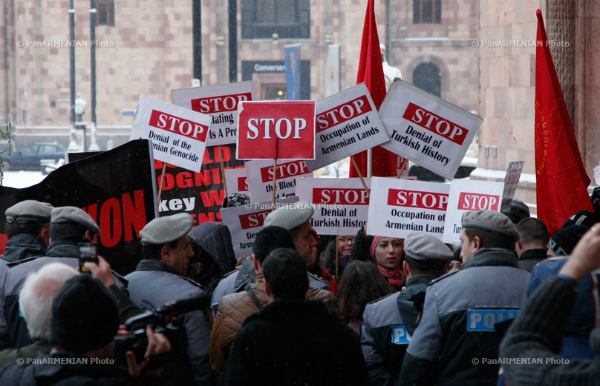 Turkish Minister of Foreign Affairs Ahmed Davutoglu’s visit to Yerevan on Dec. 12 to participate in the 29th meeting of the Council of Ministers of Foreign Affairs of the Organization of Black Sea Economic Cooperation (BSEC) can be described as an information battle.

The public is unaware of what the foreign ministers of Armenia and Turkey spoke about for one-and-a-half hours or what proposals were discussed, but it’s clear that this information attack of Turkey’s failed.

From the first few days of December, according to all the rules of war, Turkey began artillery preparations: there were reports that Armenia verbally agreed to hand over two Karabakh territories, for which Turkey would open its closed border with Armenia.

Armenia “accepted” the gauntlet that was thrown and Armenian media published a few articles criticizing such a precondition, considering it unacceptable.

The Armenian president’s press secretary, Arman Saghatelyan, did an interesting trick: keeping silent until then, Saghatelyan, the day before the visit, when it was already too late to cancel, tweeted that Armenian President Serzh Sargsyan will not be meeting with Davutoglu. That was a small “snare” by Armenia, which is how it declared the news of not accepting Turkey’s preconditions.

Armenia’s media covered the demonstration protesting Davutoglu’s visit, which forced him to enter the hotel from a back entrance, interestingly. The Armenian media, especially the Armenian Revolutionary Federation (ARF-D, or Dashnaktsutyun) media, immediately used the tweet and headlined the article “They Got Davutoglu in the Back” [AM].

And though Armenian foreign minister Edward Nalbandian declared that normalization of Armenian-Turkish relations shouldn’t be tied to preconditions, the information battle continued.

After the meeting of the two ministers, Nalbandian refused to answer journalists’ questions ,while Davutoglu decided to leave while “shooting”. He announced that he would speak only with Turkish journalists. Perhaps that was done with the aim of insulting Armenian journalists, but in this battle there were no injuries in the Armenian information field.

Only Armenia’s foreign ministry held the position of being “the defeated”: the minister didn’t speak with journalists and gave no explanations, while the Turkish minister spoke about energy cooperation and he extended the invitation to Armenia as well. After the meeting, Armenia’s foreign ministry didn’t issue a statement, leaving the information battle’s continuation in the hands of journalists.

Unlike many other countries, Armenia’s foreign affairs policies are carried out simultaneously by the country’s foreign ministry and news media. However, often in the foreign political arena, the media remains alone.