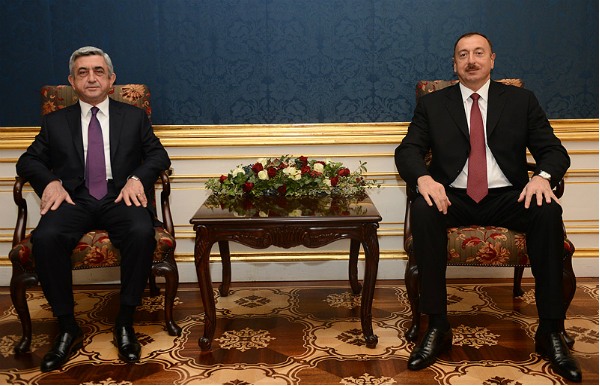 The meeting between presidents of Armenia and Azerbaijan Serzh Sargsyan and Ilham Aliyev on Nov. 19 in VIenna was seen as a sign that the Karbakh negotiations, which had been frozen these past 2 years, were resuming. The presidents’ meeting, naturally, evoked the media’s interest.

No substantial statements were made after the meeting, and it remained for journalists and experts to speculate. The negotiations being closed has always elicited the temptation to exploit manipulation and one’s own purposes. This time, as well, various speculations were made, including that Russia (or the West) is attempting to install an army in Karabakh, to force Armenia to concede two Karabakh regions, but the opposing side is not allowing it. What’s interesting is that news outlets’ speculations differed depending on their position: one blamed Russia [AM]; the other, Western countries [AM].

This time, too, there was too little analysis in news media. Mainly the press offered information pieces, which were almost exclusively online. Playing its role in this was RFE/RL’s Armenian service (Azatutyun), which was on the ground in Vienna and reporting live. Armenian president’s spokesperson Arman Saghatelyan’s manner of working was no less important: when the presidents went into the meeting room, he immediately tweeted [AM] that the meeting had begun.

This time, however, there was something different: news outlets didn’t consider it their duty to contact political parties or “traditional” experts to get an opinion either before or after the meeting. Perhaps this is due to the fact that in recent months the public is less interested in the position of political parties and, moreover, that political forces prefer not to express an opinion. The Armenian Revolutionary Federation (Dashnaktsutyun) was the exception. Besides, previous experience shows that most of the opinions expressed are devoid of substance.

One of the unique characteristics of Karabakh media coverage is viewing the issue in a broader context [AM]; in particular, in the context of Armenian-Turkish relations and Russia’s neo-imperialist policy. Some analysts, who are close to government circles, consider this approach wrong and being dictated by Turkish diplomacy. But a basic analysis [AM] shows that the Karabakh and Armenian-Turkish issues cannot be viewed completely separately.

Moreover, Turkish and diasporan Armenian newspapers cover these issues in the same context. By the way, the Armenian press has begun to republish more frequently information [AM] and opinions [AM] published in international and diasporan newspapers. Furthermore, Yerkir.am and 1in.am also try to conduct exclusive interviews and pose questions to different countries’ leaders’ spokespersons and experts. This allows us to receive information that is direct and not guided, though this practice is not currently widespread.

Unfortunately, there haven’t been discussions or debates in Armenia’s news media on the Karabakh issue for a long time, or rather, there never was such a debate. This is due, on one hand, to the secrecy of the negotiations; on the other hand, noticeable is certain news outlets’ and especially young journalists’ ignorance of the issue. Or political forces have succeeded in removing the issue from the public agenda, which, it can be said, has led to the negative treatment of Karabakh’s fate.

By Dreaming Of Ethics, They Tighten Media Law