“Media is often a prisoner of politics” 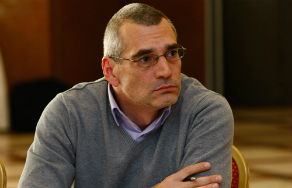 Mr. Giragosian, the Nagorno-Karabakh issue is always topical. To what extent does media coverage of the issue reflect the real picture?

Media coverage of the Nagorno-Karabakh issue has gone through two different periods. First, during the outbreak of the conflict, during the war period, there was a lack of information and understanding. Media coverage was driven by the intensity of the conflict and the threat of new conflict. And unfortunately, shaped by nationalist interests. Therefore, during that period, the discourse was unfortunately shaped by negative rhetoric on each side.

Since 1994, the ceasefire, the conflict has been a frozen conflict, and this has been reflected by the media. On the Armenian side, nationalism was no longer the driving factor. Instead, in Armenia’s media, there was more progress, in terms of more analysis and more understanding [of the conflict].

And at the same time, in Azerbaijani media, unfortunately, it’s been the opposite.

Now, however, in this last period under the political leadership of Robert Kocharian and Serzh Sargsyan, the media reflects the problem of politics and society in Armenia, where the moderate voices have been replaced by the militant. The discourse and the diversity of opinions subsided. Unfortunately, there is not enough done to challenge the narrative or the taboos. One concrete example is what we call “the occupied territories” and not “the liberated territories”.

But it also shows that the media is a reflection of society, and unfortunately, a prisoner of politics. The media is subject to the same pressure as civil society and society at large. In other words, these problems that show a lack of professionalism, a lack of media freedom is not only about Karabakh but everything.

But at the same time there have been more gains on the Armenian media side than on the Azerbaijani [side]. Coverage and analysis has been improving still. Armenians opinions are published and heard in Azerbaijani media.

What about the opposite?

There have been some cases. But obviously, more needs to be done.

The other problem is the peace process over Nagorno-Karabakh, which has a direct impact on media coverage. The closed nature of diplomacy, the secrecy of the Minsk Group has promoted a problem where a lack of information promotes disinformation.

Often we see that information (especially that which appears on television) is mainly propaganda. And quite primitive propaganda.

What we see is, if we look at specific characteristics of the Armenian media, if we look at television, on every issue, not just on Karabakh, there is state influence and control, and the use of primitive propaganda. At the same time, the lack of alternative or opposition TV makes this problem worse.

But, [this problem] is not in isolation, but about the lack of democracy and freedom. And as revealed in the recent decision about the Customs Union, [there is] a very primitive and low level of discourse and no debate, where many political forces in Armenia especially use propaganda. But the situation regarding Nagorno-Karabakh is more serious than others because without challenging the narrative, the shape of the enemy, of the “other,” makes it that much more dangerous.  What we hope for, what we’re trying to do, though, is to take the progress in the Armenian-Turkish context and try to apply it to Armenia-Azerbaijan.

Much in Armenia is justified on the basis of national security and being in a conflict zone. Don’t you think that this perhaps allows for a decision (and one without prospects) in purely propaganda language and only from a positive point of view?

True, we have the vulnerability to fall into that trap because that kind of national security argument is really not genuine, which relates to the bigger problem, however, where the government is not challenged or held accountable. You have a problem where the government gets away with this. That no one else besides the government knows what’s going on in the peace process, which interestingly makes it hard to criticize but also difficult to support the government.

To what extent are Armenians interested in the conflicts of the region?

Here we have two problems. One is the lack of professionalism in the media in general, but to be fair, it’s a natural result of seven decades of Soviet system. In other words, the development of the Armenian media has only been since 1990.

The second problem is the diaspora’s approach. My criticism of the diaspora is blindly supporting the Armenian state in anything it does. The second is a natural, but defective approach. Looking at every conflict, from Syria to Karabakh to Abkhazia, only from an Armenian perspective, which actually is to blind to understanding more.

Is there a lack of professional analyst-journalists?

If we look at content of media, there’s also an interesting revelation: in Armenian media we see 100 Armenian so-called experts. We have no idea how they became experts. [And we have] very few analysts.

I’m an American analyst. I’m not an expert on anything. I’m an analyst, that’s different. In the Armenian context, an expert claims he knows everything and is unwilling to learn more.

If we look at the analytical model, it’s backwards. The Western model that I’m trained in is taking the data and evidence and then presenting the evidence. In the Armenian context, it’s the analysis first and then putting data and evidence to support that conclusion. But it’s lazy intellectually.

There is improvement, however. If we look at people like Alexander Iskandaryan, Sergey Minasyan, people who are growing and who are approaching this in a serious way, and not as “experts”.

Conflict coverage is sensitive work. In your opinion, on what aspects should analyst-journalists focus their attention?

The danger in terms of conflict analysis is the physics of it. Physics in terms of for every action there’s a reaction from the other side of the conflict. That’s why the danger is to avoid putting all the blame all on the other side. In other words, former president Robert Kocharian made a significant mistake when he claimed that we’re genetically different and cannot get along with the Azerbaijanis. The mature approach is to say we have problems with the Turkish government, the Azerbaijani government, but not necessarily the people.

The related problem is the Azerbaijani rhetoric and propaganda is worse and so much more aggressive that it makes us feel better and look better.

The other problem is the black and white paradigm — in politics and in media here. Which is wrong because it cannot be [that] the government is either all right or all wrong. In other words, criticism, no matter how positive or constructive, is seen as treason or traitor.

Can people who live outside Armenia, becoming acquainted with the analyses in our media, get a complete picture?

People like Tom de Waal, others like him, do understand. But you do raise a good point, in that everyone has a bias. For example, I’m American-trained, American-educated; therefore, I have a bias that I cannot properly understand the Russian perspective.

And is that Russian model the fate of Armenia?

Not only hopefully not, but definitely not. The Russian model or approach is bad for Russia, first and foremost. Fortunately, I think, most people in Armenia understand we don’t need an American model or even a European or Russian model — we need an Armenian model. The Soviet legacy has to be overcome.

Actually, in Armenia, my problem is not the lack of progress, but that the progress is too slow and hasn’t been enough.

But I’m an optimist, and I haven’t given up yet.