An Issue With The Stage: From Statues To The Media 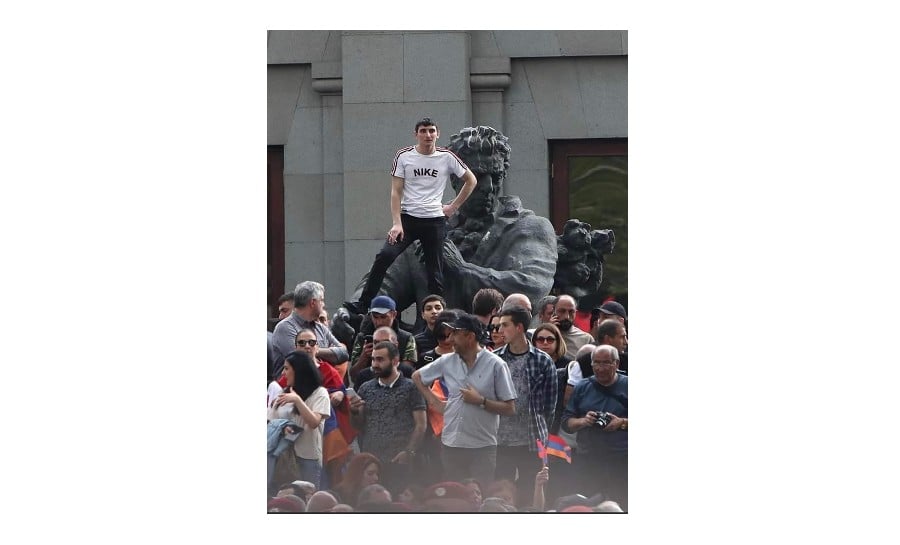 For a few days, Yerevan has turned into a stage where various old and slightly upgraded people and forces, who call themselves “opposition,” try to do everything to expand the idea of the stage and include as many participants as possible.

In the language of theater, for the audience to become an actor. So that there are no spectators at all, but there are active participants, at least standing in the circle of the stage (albeit in the role of silent statists, but it is desirable to shout loudly about saving the homeland and ending the plunder of lands).

This trick of Total Theater worked wonderfully in 2018, as the street struggle was really massive and at the same time surprisingly individualized. The people took to the streets to demand the resignation of the authorities, and everyone knew that they were both a participant in a great cause and an independent unit.

At that time, the idea of a stage was even mobile.

That is, the stage was where the person is. The person was moving, taking the event with them and leaving a trace about it on social media, which was followed by a new movement and a new trace in the online domain.

But now, in 2022 (asking people who have seen war and are hard to digest defeat) to come and stand behind old and slightly upgraded people is not a good idea.

Of course, there is frustration and anger with the current political force, which is the main bearer of the burden of defeat and, no less important, has abandoned reforms in many areas.

But in 2022, the political tricks that ensured mass disobedience in 2018 can no longer work.

Now marches, loud car signals, and loudspeakers have become something of the city’s scenery.

It is decoration, not a stage on which there is action and collision. By the way, this decoration is very inspiring for the citizens who left Russia due to the war and pressure, such a thing has not been allowed in their country for a long time. And here it is included in the tourist landscape as a spectacular entertainment episode.

The Yerevan of 2022 is a strange Yerevan. Here they want to repeat something that did not satisfy many people, but now other people are persistently repeating the same thing and persistently trying to get a different result.

There are three main points that can be effective in starting a street struggle: a lack of media resources, creating horizontal links, and using fresh vocabulary.

What are we here to hear?

A street struggle makes sense if you have nowhere else to publicize your ideas and take further steps. Therefore, you need a stage in the square.

Yet today the “opposition” has such a large media resource, from surface broadcasters to small Telegram channels (there are a lot of bloggers-influencers in between) that the call for a street struggle becomes a mere image that spreads under the auspices of those forces as content or combat-ready documentary material.

It turns out that you are doing something to report about it in your media (as well).

And the natural question arises: what is there to say that should be said on the street and not on TV or on social networks? The rhetoric is the same (salvation of the homeland, the resignation of the government, the spread of scary scenarios, etc.), and nothing changes aside from the change of platforms and nothing becomes more specific.

After all, if a political force submits an application for reform, it should announce not what it wants to save, but what steps it will take (say, will it recognize the defeat agreement as annulled?).

And it’s more effective to do that on television with millions of viewers than with a relentless and sticky invitation to join a group of urban disobedient people.

The disobedience movement of 2018 was primarily against the oligarchic structure of relations, and the chance to replace the vertical with the horizontal was attractive.

After all, the clash between the rich and the not-so-rich will not be ignored today either.

Apparently wealthy people now want to create the illusion of unity with the wider community, which has only recently been called “mud,” a “herd” and the like. And with that vocabulary, they emphasize that they are not a herd, but are ready to become (again) leaders who go before the herd.

Words work very interestingly. And when you hear, for example, many free and independent journalists talking about the impending clashes with the police and the use of force, you realize that this is also the expected and desired result of this wave of demonstrations.

The mud and the elite can join hands and sing together in rare situations: if any party decides that self-deception is valuable.

But now the city is looking at this situation as a theatrical performance. In the theater, the audience knows that there is a composition on stage, but accepts the rules of composition. It’s not like they would go on stage and become an actor.

At best they might climb a statue to see what is happening.

And this is a very healthy and normal wish, because the city opens its arms, and presents its statues so that the city and its inhabitants can be brought closer.

Even if the fashion sense and hairstyle of the climber standing on the statue, to put it mildly, are not good.