The Armenian media field enters 2022 in a rather mixed information atmosphere. In this case, it is not a mess regarding events, but the platforms.

On the one hand, in the second half of 2021, the majority of Armenian news websites registered a decrease in visits. It is difficult to clearly assess the reasons for this. There are probably a number of circumstances. The public is generally tired of the news. There is an unspoken, but seemingly noticeable decline in funding for serious media outlets. In any case, there is a 10-40% decrease in the audience of most media outlets.

On the other hand, it has become more difficult to work with the main social network in the case of Armenia, Facebook. If for years Facebook has reduced the media coverage due to changes in the algorithm, today there are difficult problems for specific Armenian platforms.

Thus, the pages of a number of news outlets have been blocked because Facebook openly censors the content.

For example, Monte’s picture or even the arbitrary use of Monte’s name leads to the blocking of pages and accounts. It is not clear why the Facebook administration has now started such censorship of Armenian accounts. (It should be noted that the first cases were registered in 2020, but from the second half of 2021 the blocking became mass).

One can assume that numerous Azerbaijani protests and lobbying have led to such consequences. Or maybe one of the Facebook moderators turned to Wikipedia after the Azerbaijani protests, where there is a clear connection between Monte and ASALA, and ASALA is presented as a terrorist organization. Which became the basis of the moderators’ approach.

And on Facebook, as it is known, when they start blocking something, they do it mindlessly, automated, like a complete idiot.

Moderators and simply robots look everywhere for Monte’s pictures and block them, give warnings to pages, accounts and groups and temporarily close them. And in case of repetition, the accounts are often simply destroyed.

The robots can find Monte’s images even in old comments made years ago. And now imagine how many Armenian accounts there are on Facebook, where there are not at least a few pictures of Monte. And imagine the scale of the disaster.

Moreover, at this moment it is not clear how to explain to the mods sitting on Facebook that they are wrong. And even if the mistake is corrected, tomorrow, the next day, a moderator will read something new on Wikipedia and start blocking the pages under another useless pretext.

And again and again, we come back to the idea that we need to think about the diversity of sources, we cannot rely only on Facebook. Especially since the moderation of the given platform is getting worse and worse.

Starting from this paragraph, let’s try to point out the platforms that are already inspiring hope for this diversification in the new year.

The first thing we know from Cloudflare data is that in Armenia, as well as in the world, TikTok has become the most visited domain. 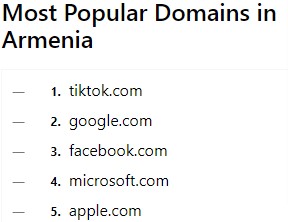 Cloudflare Radar data in Armenia for one monthNow let’s not discuss how good or bad this news is in terms of content quality. It is a fact that this fact must be taken into account. And only complaints will not help the media. The big media in the world do not miss out on using this platform.

Another interesting circumstance is that Telegram in Armenia finally surpassed not only Viber but also Facebook Messenger and WhatsApp and became the most used messenger. This also makes it a good platform for the media, given that the influence of such channels in Armenia continues to grow.

Telegram channels in Armenia have quite a lot of news. However, most use them in much the same way as Twitter. That is, wrong. Both Telegram and Twitter, which is not a bad platform, are mainly used as link repositories in Armenia.

But you cannot work on these platforms that way, because in such cases the audience stops clicking on the links. It is necessary to work with the audience, to understand the language, style, approaches and what the audience wants.

In any case, it is necessary to take into account the fact that today, the audience is scattered on different platforms. The same Facebook audience in Armenia has already started to decrease, after remaining unchanged for about two years.