A Debate That We Were Not Invited To Participate In 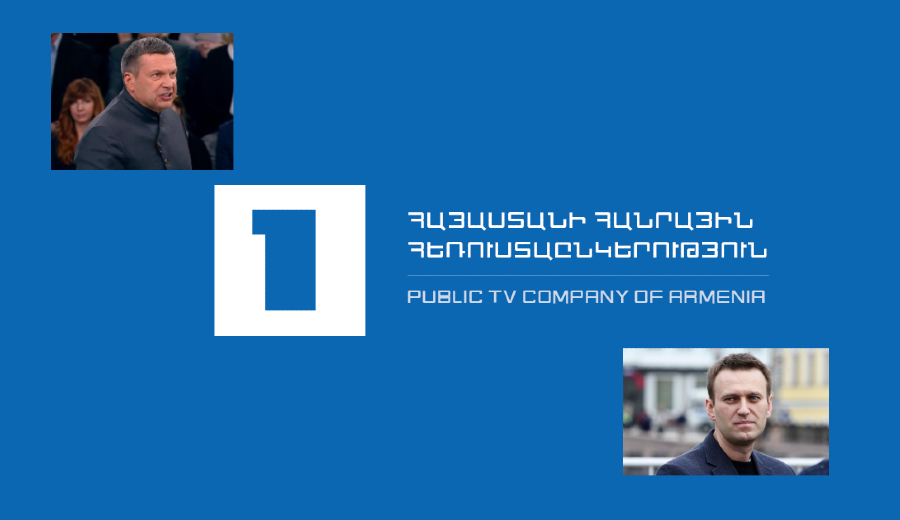 The revelation of Russia’s only and main opposition politician, Alexei Navalny, in a news issue on Armenian Public Television (quoting his opinion on the referendum on Russia’s constitutional amendments in a matter of seconds) became an informative occasion for Russia.

In his speech, Vladimir Solovyov, a great manipulator and loyal columnist of the Kremlin, addressed an emotional question to “friendly Armenia.”

“Look how interesting it is. Look, our friend in Armenia … on public television … Who are they showing? They show Nazi Navalny, who called Armenians “crosses” who hates Armenians, hates Armenia, despises it … And you take that man out on Armenian public television and show him on your air? Interesting… very interesting,” Vladimir Solovyov said. (reference to Armenia from 34:30).

Navalny then spoke about Armenia, saying at the beginning of his blog that “this week he is a man shown on Armenian television.”

“Armenia has stopped being a friendly country for Vladimir Solovyov, because they show me there … Now everyone in Armenia is ashamed. I don’t know where you got the different things I said about Armenians,” said Navalny, who tweeted about it.

Then the Union of Armenians of Russia announced that by showing “anti-Armenian” Navalny on Public TV, Armenia “spat against the wind” that it was an “anti-Armenian action” (?), which calls into question the Armenian-Russian friendly relations. That it was a “provocation”.

Both Solovyov and Navalny are able to turn their style of speech into a fiery mixture of laughter and passion, which has an emotional propaganda effect. They respond to each other by making Armenia an excuse to start their own media wars.

And this is a trick of a very narrow and even more annoying Russian propaganda machine.

When it doesn’t matter what you’re talking about, it’s important that you do it confidently, with rhetorical questions and folklore vocabulary.

“Whoever is not with us, he is against us,” propagandists like Solovyov always say, meaning to say that given that Russia and Putin are an inseparable whole, that there should be no doubt that Russia can exist without Putin (therefore, without the constitutional changes that will allow the president to be president for another 12 years).

The idea that the president and the state are the same is the core of Russian propaganda.

Navalny has long been absent from television, his name is taboo on major Russian channels, and, of course, actors and agitators like Solovyov can make such news throws in a primitive discourse of friend-foe, Armenian-loving-Armenian-hating.

This helps the Kremlin to be inviolable once again to their inner audience. And Solovyov basically asks, if we don’t show Navalny, why are you Armenians doing it?

And Navalny uses it to remind us once again how dirty and two-faced Solovyov’s image is (wealth abroad, propaganda inside, and Putin forever).

But in any case, it is Russia’s internal affair and internal dispute, in which Armenia was not invited to participate.

It is already a tradition that every time the word “Armenian” is used, we react violently and disproportionately, trying to understand who our friend, brother, enemy, hater, worshiper is. And sometimes we forget that all those words and labels are just tools. No more.

Russia’s image in Armenia is mostly positive if hence the Russian propagandists do not spoil it. And not every internal Russian issue is interpreted as a threat to “drive a wedge” or sever fraternal ties in Armenian-Russian relations.

The same thing happened when the Russian Embassy in Armenia responded to the regulation of the spread of foreign language channels. It was said that taking into account the “special ties” between Armenia and Russia and the fact that Russian is more common in Armenia than just any foreign language, it is necessary that “the Russian language has an official status.”

In general, there has been no decolonization of Armenia’s media space in the post-Soviet period (the mere fact that our children continue to watch cartoons in Russian is evidence of that).

And this is the first condition of colonization (love us so that you will be well).

And since it is difficult to advance this unicellular idea in a crowded information space, the background news becomes more important than the news!

In other words, it is not just with words, there should be a chain, a background, a context.

And in Armenia, an insane media approach has been created, when any website, from the one of mushroom origin to the largest, simply quotes an excerpt from the opinion and makes it full of news without any background history. For example in the way that news.am and tert.am dealt with Solovyov’s words.

Then a wave of analyzes began, with various experts saying that “showing Navalny is showing contempt for state interests” and how unstable and short-sighted the new Armenian authorities are.

There are two main points in this story that show the defenselessness of our media field.

The first is that Russia’s emotional and frontal propaganda is nothing new, and often has nothing to do with journalism or even reality, but rather the modeling of a fictitious and tense situation.

It is spread mainly by the federal channels and under political order, hysteria becomes the norm.

Armenia is just an opportunity for Solovyov, Navalny, and more propagandists who have a wider opportunity to turn left and right.

It is a Russian agenda, not an Armenian one, where you gain nothing by adding noise.

It is possible to withdraw and move the embryo of this same Armenian-Russian information clash, for example, to the land of Armenian-American. Is it possible that showing the opposition to the US President on our channel will cause a protest in the American media, and the American-Armenian organizations would call it “a wedge between friendly peoples?” Hardly.

The second important observation is that Armenia’s media field is not resilient. Or better yet, not able to present the correct context.

For example, Hanrayin’s report on Russia was constructed in such a way that it’s as though the last 20 years of Russian history didn’t exist, but right now the Armenian journalist is simply gathering opinions for and against the referendum, putting them side by side and showing that he is so impartial.

It’s not impartial. Emotional propaganda can be overcome not by such primitive reports, but by reflections with a more flexible and intelligent structure.

Nothing is reset, deleted and restarted.