The Words Of Deputies In Extreme Situations 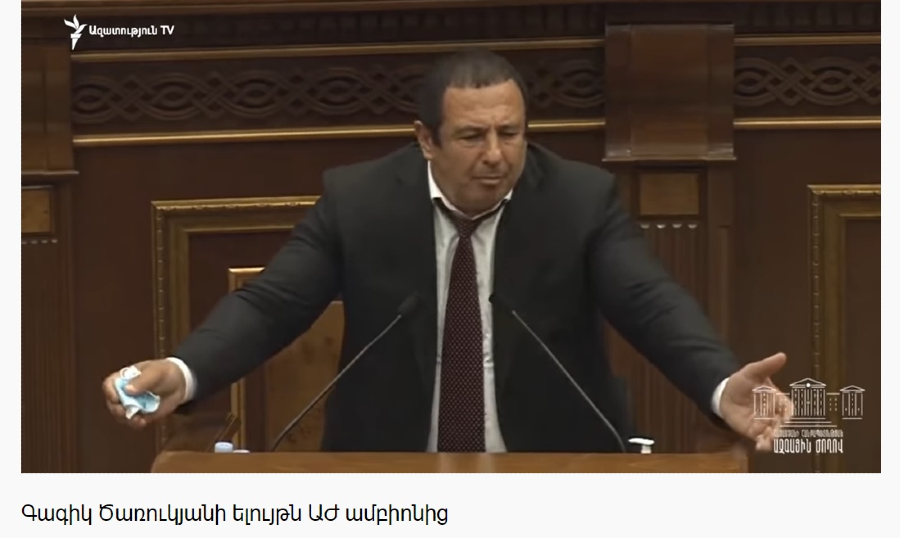 The words and appearance of Armenian MPs are always a subject of discussion in the press. The current parliament, due to its high level of education, is literate in terms of their speech.

Let’s take a look at the dramatic twists and turns of the last few days, as anger, danger, and controversy tell a lot about a person, even if he or she is trying to hide it in a flood of words.

We will mostly consider the words of the Prosperous deputies, as they were in the epicenter and the majority force who responded with only one or two words. The leader of the faction Lilit Makunts explained that silence by the fact that during the legal process it was necessary to listen to the prosecutor’s motion and the speeches of the Prosperous Armenia faction, which is in favor and to make a decision by secret ballot.

Tsarukyan was right, the journalist was wrong

The situation was strange and dramatic, as the “lion-king” who had ruled as an MP for two decades would be deprived of the immunity he enjoyed for many years, and it was as though he had been given a chance for his last words.

Some excerpts from Gagik Tsarukyan’s eloquent, uncontrollable, endless oral speech are an interesting material for interpretation. First of all, the lively long speech was an attempt to hide the real anxiety and fear of the speaker.

The use of multiple topics was a means to escape from reality, to keep spirits high, and the real anxiety was disclosed in these words. “So much immorality, they call me, they call my son after me. At least be Armenian, be Christians, the father is here, leave the son to be a man at home. Let’s arrest the father or do something, but there is nothing wrong with the son.”

To substantiate his innocence, the deputy twice resorted to the “people’s” dictionary, that he is well-versed in, and which was surprisingly correct and appropriate. “Tsarukyan is not afraid of what the wind will take away from the stone.”

The previous idea was widely circulated in the press. “You want to intimidate, fabricate, paste, but dry matter won’t stick to a person.”

Presumably, Tsarukyan meant the saying that dry dirt does not stick to a person (unlike wet dirt).

But far from the “people’s” vocabulary, dozens of websites and journalists, accustomed to editing Tsarukyan’s thoughts, wrote the word “dry.” “No matter what they do, dry matter will not stick to a person.”

It is fair to say that Tsarukyan was right, the others were wrong, and the interesting thing is that “dry” means an illness, infection.

The speaker also spoke from the co-chair but in an unusual context. “Or they say Tsarukyan does not know international happenings. Eh, Tsarukyan knows so much, my dearies, you ended up infecting everyone, today you say, wear a mask, you are fining people. No one can hand over the people on Facebook, 500 employees of the SNCO, better for each state, everyone can have ten heads, a hundred heads, a thousand heads, and I want it too because this parliament fully realizes real life.”

Interesting and noteworthy are such archaic words as “ten heads, a hundred heads, a thousand heads” that were expressed, as if the only thing left to add was the phrase magicians-heads of magicians, and one could guess that Gagik Tsarukyan remembered the novel “Samvel” read during his school years.

The curse was also in patriotic spirit: “Let those who do it for their own gains be Azerbaijanis and Turks.”

Emotional Naira Zohrabyan and others

Naira Zohrabyan, who is educated and well-spoken, does not look for words, but in an extreme situation, she speaks harshly, suffocatingly, with accusations and Tsarukyan was right to warn not to make an emotional speech.

At the session to deprive Tsarukyan of his immunity, she considered the facts presented by the Prosecutor General as unlawful as the “submitted” papers, which state that Zohrabyan had committed Kennedy’s assassination on Tsarukyan’s instructions.

At the end of her speech, she read Bukowski, moreover, the theatrical MP read it, addressing actor MP Artur Manukyan.

The deputy also addresses the classical Armenian (Grabar) ways to emphasize what is being said.

“Allow me to disappoint you and your attempt at blackmail… The My Step deputies, without giving each other a turn, as “the state of emergency” of the century, a text being attributed to me is being spread, according to which I, allegedly, promised to resign if I made an emotional statement that contradicted my team’s interests. I don’t know whose fantasy this is … A piece of paper is cheap misinformation, and if I wasn’t lazy, I would turn to the tried and true militia.”

In his speech, Arman Abovyan, a participant in the Game of Scholars and an MP who cites examples from the gems of world literature, frequently used Russian and colloquial words, which had not been observed before.

“Dear people, know one thing, these authorities are willing to do anything for their armchairs, private drivers and bonuses.”

Or, “Women were being dragged across the ground by the police, and the NGOs your pocket and you happily wrote statuses that there was no violence, everything was very proportionate.”

Shake Isayan spoke as an excellent examiner, without taking her eyes off the cheat sheet, even uttering threats in quick monotone.

The speeches of MPs Vahe Enfiajyan, Sergey Bagratyan, Mikael Melkumyan had a poor prognosis, however, they were balanced, even though thousands of the latter’s students constantly remind him of the fact that he was a “lecturer.”

Mentioning Lenin as a person next to the name of the Christian saint is a proof of the behavior of the man who remained in the Soviet Union, all that remained was to sing: Lenin, you are life unending…

Iveta Tonoyan, a member of the Prosperous Armenia Party (PAP), who wore a mask as mandated by law and who although made threats with Russia, answered journalists’ questions politely and competently.

It takes talent to present George Petrosyan’s inclusive speech, it’s better to watch it once.

Judging by Tsarukyan’s words, the face of the faction. “I can say that it is halal. I bear the pain of Gevorg Petrosyan, that he, as an Armenian Christian nation, is the first Christian nation, family, holiness, church, Bible …”

The lawyer, lecturer, speaks with such a loathing and disgusting expression on his face directed at the Prime Minister of the country that one can imagine the anger of his inner world when writing a status about actor-MP Artur Manukyan.

“What can I say to this lost man now? Come on, get out of here by accident, take off your mask and look at yourself in the mirror.” … What a void deal, don’t be a disgrace … Although you’re new to disgracing yourself … ”

In recent days, Gevorg Petrosyan has been fined twice for not wearing a mask in court but has remained steadfast. In his refusal, he was not alone. Nora Arustamyan, a proud MP with her father Sedrak Arustamyan, who became a millionaire thanks to the Shah’s gold, was also fined.