When The Subject Of Manipulation is Your Neighbor 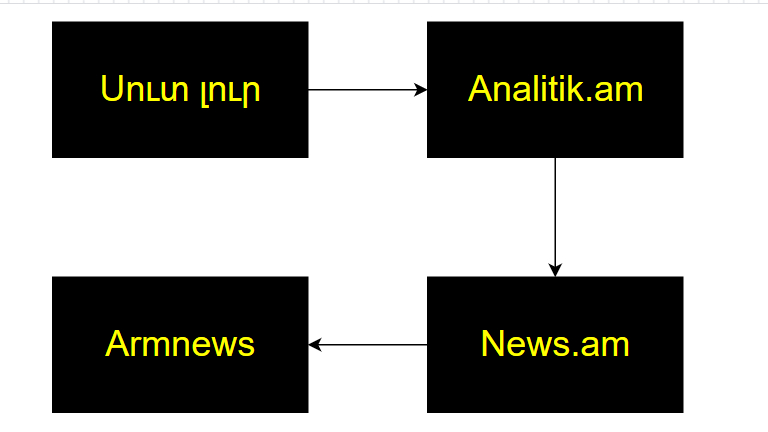 Today, everything is difficult, every action or inactivity, as well as writing on the topic of the day, because you wake up and sleep with only one thought. “God, save Armenia.”

How can you be useful, not harm the country, the people, even in this case, when the victim of media manipulation is your neighbor when just by using their name, a journalist has written material, perhaps unwittingly, false material.

Minutes later, it became a terrifying, frustrating headline and spread across websites. “In Ararat, an elderly woman who has all the symptoms of coronavirus is not being tested.”

In the evening, this news became the running line of ArmNews (maybe another sister TV station), and that constant rumor is that your neighbor is on the verge of dying from the virus.

The first surprise from the telephone conversation with the “victim” was that she did not see or talk to any journalist, while the source of the news says that “on June 1, 64-year-old resident of Darakert village of the region of Masis, Satik Stepanyan, who has been having a high fever for 8 days already, wrote to Analitik.am.”

Here is what Mrs. Satik’s said, without editing. “Listen, I didn’t address anyone, I didn’t say anything, I’m not contagious, and I haven’t seen any journalists, I may have shouted, there was a journalist in line, I was shouting loudly, and had been standing under the sun for3 hours and my blood pressure rose. I had a fever for two days, I went to the polyclinic, I am very grateful, they gave me a prescription… My husband, no, he doesn’t have a fever. The nurse is my neighbor’s daughter-in-law, she always asked. I ate some ice cream, my stomach could have been hurting from that, so I went to the doctor again, and they sent me for an X-ray in Masis. We went to the polyclinic, three people were sitting, they said the line wasn’t from there, then they said we were standing in the wrong place, that the line is from outside, we were left outside for 3 hours. Maybe I’m ignorant, I don’t know where to stand, why didn’t they tell me the right place? We are not guilty, we are ignorant, not guilty.”

The journalist who signed the article confirmed what Mrs. Satik said, saying that she did not really talk to the woman, she was just “in the area.”

They didn’t talk, so the woman didn’t say, “I have a headache, loss of taste and all the symptoms that are typical of a new coronavirus,’ either.

The conclusion of the article is “We are left with the impression that it’s because of their unserious attitude that the epidemic is gaining momentum instead of falling,” let’s consider the joint contribution of the villager and the journalist in the development of the Armenian language.

Therefore, of course, she did not apply to the “hotlines of the Ministry of Emergency Situations and the Ministry of Health, but nothing has been done yet,” the article concludes.

The object: The bad reputation of Masis Hospital

From the title of the article, the joint generalization of Mrs. Satik and the journalist, it can be assumed that the target is the Masis hospital.

“I can only say that there is a terrible state of mindlessness in the healthcare system. Having accompanying illnesses, being a pensioner, why do I have to wait 3 hours for an x-ray and end up with a nurse neglecting to find out that I’m waiting in the wrong place? It was later revealed that the X-ray doctor had gone home. After that, I felt worse because of the constant change in my blood pressure. Where are the people who are responsible for the health of the citizens and why is there such a frivolous attitude towards those who have serious symptoms?”

The first reaction of those who read the news is that everything is possible in Masis.

The infamous reputation of Masis Hospital in recent decades is such that they will believe whatever is said.

According to that calculation, Nune Nersisyan, the director of the hospital, successfully performed the suspicious operation “Tea Instead of Urine” three years ago, giving the institution that she runs tea instead of urine, received the results of the analysis and made it a public fact.

Eight of the fifteen medical staff at the lab gave their resignation, and she hired her own staff instead.

With many questions, this story was accepted by the masses in the place of melted butter, because the whole region is dissatisfied with the Masis hospital, and they will believe anything.

It is now clear why Minister of Health Leon Altunyan during the occupation of the lukewarm, considered the experiment of the director of the Masis Medical Center an “interesting and creative approach” during his tenure, who “sent tea to their laboratory instead of urine analysis to test the skills of employees, thus proving that they are failing in their work.”

I found out more about Masis Hospital than Altunyan’s strange and creative sample.

Years ago, a pregnant resident of the Darbnik refugee dormitory told my reporter that “the five of us don’t want to have children, I don’t have any money. The doctor at Masis Hospital persuades me to have a child, leave it with them and they will give me $200, and I am wondering what I should do.”

The story is real, I remembered after the scandal of Razmik Abrahamyan, the names were forgotten, the disgraceful $200 was what left an impression.

Many people in the region know such stories, they still don’t trust them, we just hope that after the revolution, the anarchy of the hospital and the doctors, with savage or sly appearances, is in the past.

However, it turns out that the former director of Masis Hospital, Dr. Nune, has recently become a witness to the virus and preaches that there is no epidemic in Armenia, and it was invented to enrich the new government.

Minister of Health Arsen Torosyan has sued Nune Nersisyan-Avanesyan, former director of the Masis Medical Center, for dangerous and misleading information about the epidemic.

The lawsuit was filed on May 14 and signed by Judge Sargis Yeritsyan of the Court of General Jurisdiction of Yerevan.

Comparing the facts that do not seem to be connected, at first sight, one can imagine the chain of events by which the condition to keep social distance thanks to the contagion, the outcry of a woman waiting for hours outside for an x-ray, unhappy from the lack of attention, becomes an article whereby an elderly woman is not tested in Ararat who shows all the symptoms of the new coronavirus.

There is something good in this story. The next day, the director of the Darakert polyclinic took Mrs. Satik to the Masis polyclinic in her own car. “My lungs are clear and unimpaired.”

Health and patience for all of us, in the region of Ararat and elsewhere.