Calculations And Recommendations After The Georgian Crisis 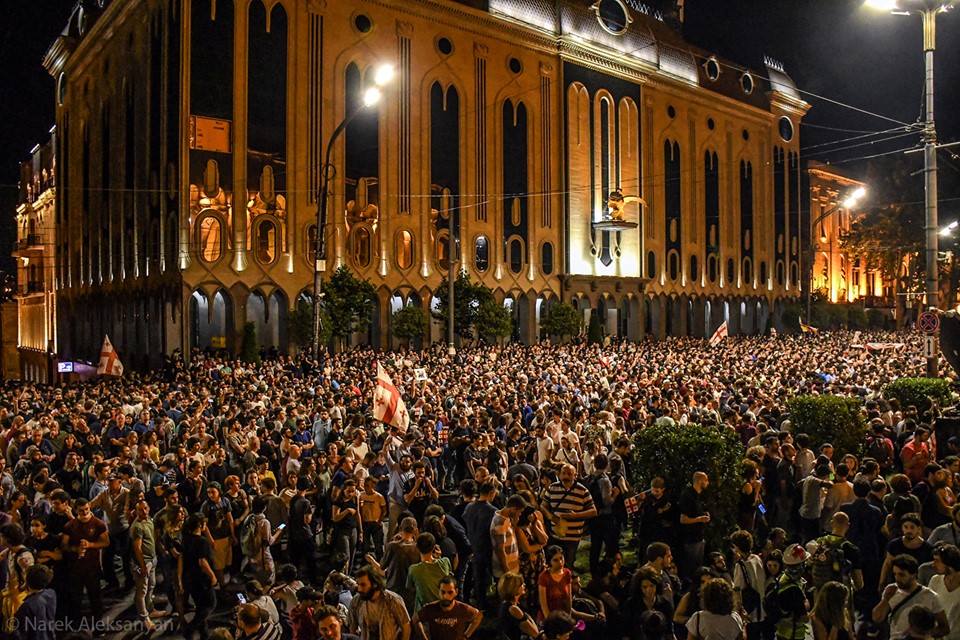 The capital of Georgia, Tbilisi, is in its sixth day since being shaken and politicized by thousands of people who are dissatisfied with their political elites, demanding the resignation of the heads of different ministries and agencies.

This is one of those cases when the breakup between the government and the people was just looking for a pretext to get fired up. And the Russian deputy sitting where he should not have sat became one such an excuse.

It all started with the Inter-Parliamentary Conference on Orthodoxy, with Rusian delegate, Sergei Gavrilov, on June 20, sitting in the chair of the Georgian Parliament and speaking in Russian. This fact provoked Georgian opposition deputies who interrupted the session calling the Russian deputies “occupiers.”

Then began a spontaneous public fury, at first from the hotel, then in front of the parliament. There were clashes between demonstrators and police, people were injured (there was also a death), imprisoned and blood was shed.

The speaker of the Georgian parliament resigned and declared that extraordinary parliamentary elections would be held. That is, what happened as a result of a political crisis occurred when the people felt that the elite should either change itself or they would force it to change.

Russian President Vladimir Putin decided not to mitigate the tense situation in Georgia but exacerbate it on July 8, ceasing direct flights between Russia and Georgia.

Gavrilov’s move could have been worth offering an apology, even if only formally, and Russia could have decided not to take the role of a punisher, but the Russian president decided that it would be appropriate to use “anti-Russian” media to show his own people that everything that happens with its neighbors are directly related to Russia alone.

This is how the imperial image works, which needs new occasions for being quenched. And Russian media disseminates the idea that anti-Russian sentiments are in Georgia. Moreover, in Georgia, “they are going to kill the Russians,” and pressure should be placed on Georgia.

We still remember the Electric Yerevan movement, where the Russian federal media preferred to present the world with chaos, a hostile plot and explained every complaint with “anti-Russian” campaigns, even if the motives of the movements were to make their country better.

And for Georgia, Russia remains a state that has won the war, where territories have been lost.

In this situation, it is desirable that the political and news media in Armenia responds with restraint, as the two states are of crucial importance for us.

Perhaps we can also be the exporter of this restraint, suggesting a package of peaceful (even velvet) solutions to the two states. And this is possible if we do not avoid talking about Russian-Georgian tension but discuss it. In fact, in our media field, there is very little.

Presenting the events of the first days in Georgia, Public Television stated that “news has been made known about the victims of the disorder,” and the word “riot” was also used.

Then there was a quote from the Russian Foreign Ministry that “the disorders in Tbilisi are a provocation that hurt hence Georgia in the first place.”

Of course, the media tries to be unbiased (even if only formally), impartial and an open place for opinions from both sides, but the problem is that there are no two opinions, there are many opinions. And there is no need to simply record them.

There is a need to discuss the situation, even by recalling how the disconnected elite collapses.

Also to admit that the cessation of flights was not the decision of Russia but of its president, and there is actually a separation between these two entities.

The suspension of air transportation to ordinary Russians or Russian businessmen is not beneficial, it is simply a punitive step which affects all spheres. First being organized tourism.

There were also comments that Georgian wines, mineral waters and agricultural products would be banned in Russia.

The political role of Armenia in this situation can actually be peaceful-reconciling.

But, for example, the head of the NA “My Step” faction said that “personally he does not understand the role of Armenia in the process of mitigating the tension.”

Certainly, it is complicated and also ungratifying, when tense relations try to materialize.

For example, when the head of the Bright Armenia Party, Edmon Marukyan, said on Facebook that the suspension of flights between Russia and Georgia was a good opportunity for the development of the Gyumri airport, it was viewed not as a mitigating, but an aggressive proposal.

Even when the MP said, “this is fundamentally important.”

Perhaps that which is fundamentally important for us today is not to take advantage of the problems, but to offer solutions. Drumming a countdown is not a good sign. After all, it’s not pretty.

It has also become known that “several airlines are willing to participate in the settlement of the crisis between fraternal peoples and develop transit routes.”

Of course, the phrase “fraternal peoples” awakens the Soviet era, but maybe sister-brotherly interstate relations will soon be updated in terms of vocabulary.

There is much to discuss the Russian-Georgian relations and the role of Armenians.

For example, why Armenia should not only make money from the tense Russian-Georgian situation but try to be open, free, safe and beautiful for people from both sides. Even if only from the air for now.