Not Fake Threats of Death And Reckoning 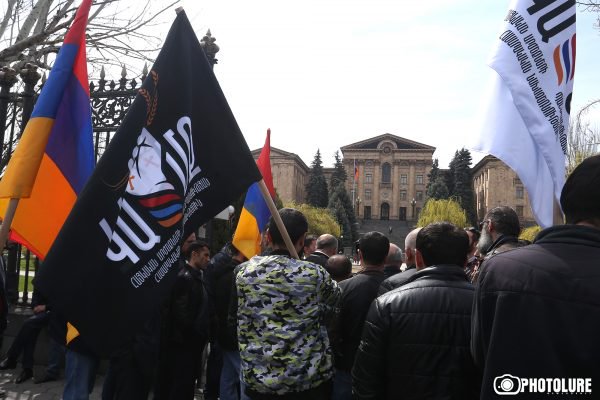 A man in a military uniform is threatening murder on Facebook. He speaks on behalf of the entire staff of “Eagle 30 suicide bombers.” He reads with the tricolor and Prime Minister Nikol Pashinyan’s photo hanging in the background.

The reason for his speech was a speech given by Lilit Martirosyan, a transgender woman, at parliamentary hearings on human rights at the National Assembly on April 5.

The man threatens transgenders, “We, the true Armenians, those who swear by the suicide bombers, the dedicated soldiers of our nation, people and state, promise that we will do everything possible to make sure that they do not breathe freely. Dear authorities, you cannot imagine the extent of our fury towards them now. Don’t call us murderers, Because if we suddenly terminate one of those, don’t come running to us asking us why this happened.”

The man in camouflage called people to gather at the National Assembly the next day to find out which MP had allowed the transgender Lilit Martirosyan to enter parliament.

The next day there was another man among the participants of the rally, already with a knife.

“I am ready to literally eliminate,” he said, at first making movements with his hands, showing how he planned to eliminate, then showing the knife as his means of “eliminating.”

MP Vardan Ghukasyan was also a participant of the rally and was discussing the possible penalties against LGBT community representatives with a priest at the rally. The priest suggested imprisonment for 4 years, but the MP did not agree. “It is necessary to burn them in the square,” said Vardan Ghugasyan.

These obvious manifestations of death threats towards transgenders and the LGBT community and xenophobia are broadcast throughout Facebook and the media.

In general, hate speech and death threats are prohibited.

Article 22 of the Law on Television and Radio states that it is forbidden to use television and radio programs to “promote national, racial or religious hatred or incitement,” “to extend the appeals of spreading punishable acts prohibited by law,” “for the purpose of broadcasting programs containing or promoting violence and cruelty.”

Internet broadcasting has its own regulations. Death threats are death threats, regardless of what platform it is made from. And the media should work to prevent the spreading of this threat.

The expediency of broadcasting a hate-driven protest rally on a live broadcast is at the very least, debatable. No legal action has been taken against death threats in social networks.

What are the law enforcement officers waiting for? For the next government session? Does Nikol Pashinyan have to order them to do their work immediately? The same way he did when launching the fight against fakes?

During his visit to the Noragavit customs house, Pashinyan talked about the fake problem again and explained his concern over the calls for violence, the premeditated acts of national hatred.

“On the day of our rally, a page with our symbol said “bring knives to kill the Republicans. Now, if one member of the Republican Party had been scratched by a knife that day, could we prove anyone that we did not organize it? So what should we do? Leave it without a response? One, two, three times that can happen, right?” said Pashinyan.

Now the Prime Minister should probably formulate that concern at the next government session (especially since Nikol Pashinyan’s photo was hanging over the head of the representative of the Eagle 30 suicide bombers as he was making death threats), and tell people to deal with people on social networks who call for killing and burning people, in order for them to deal with it.

And what if he doesn’t say it?

If Pashinyan’s law enforcement officers were able to find and arrest the admin of a Facebook page in one day, on the basis of spreading national and racial discrimination, nothing hinders them from performing a series of actions and to restrain the flood of xenophobia, which goes through traditional and social media.