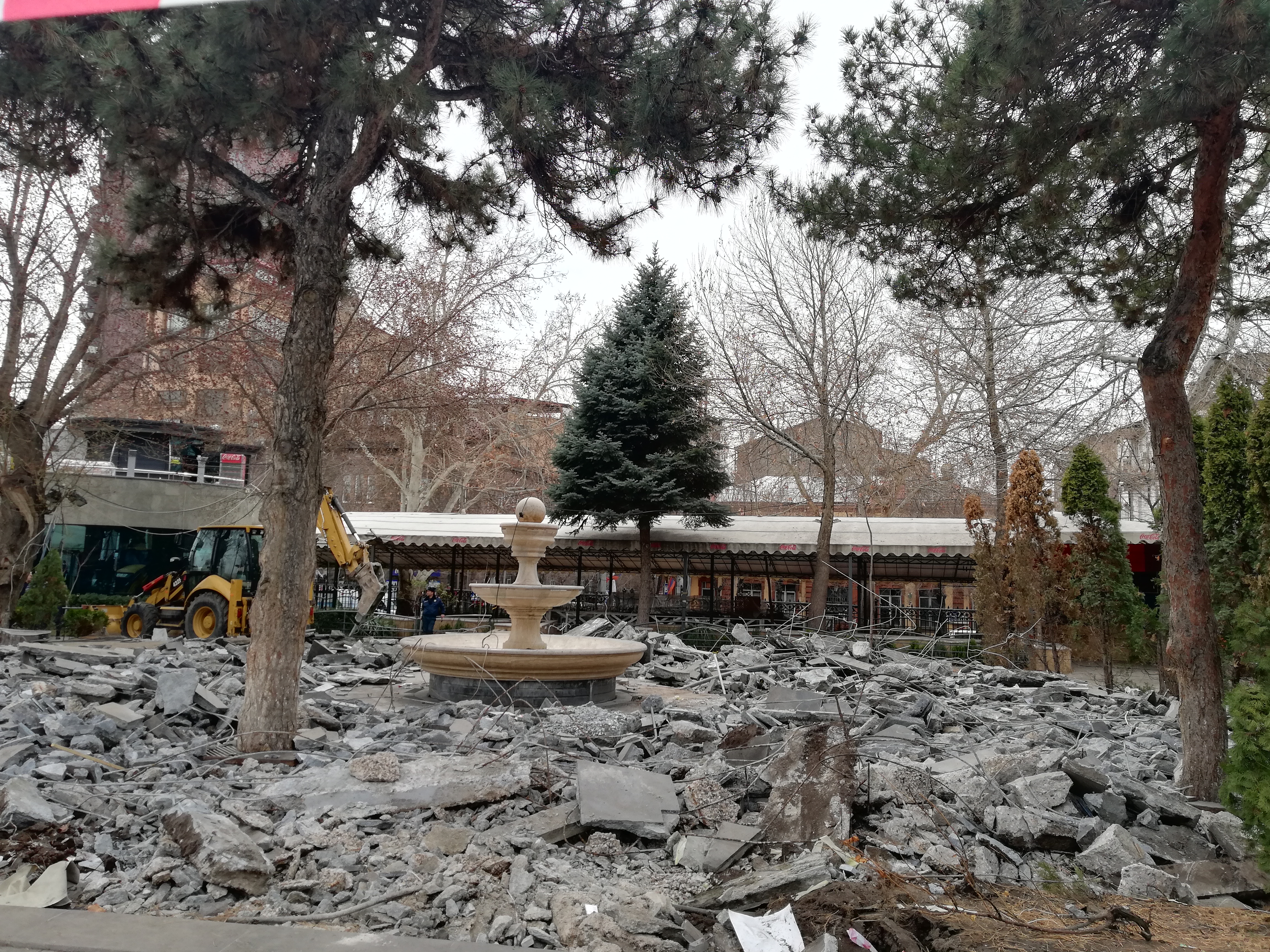 The area adjacent to the Yerevan Opera and Ballet Theater has been in the focus of attention for a few days as a classic theater-political square, with protest rallies, passionate arguments, uniforms, bulldozers, physical and psychological force, and active coverage.

Almost all news outlets have been going live from the center of Yerevan since March 14 and are following the City Hall’s dismantling of the cafes and restaurants and those resisting the dismantling.

The news outlets are allowing us to follow live how officials (they say that they are cleaning up illegal buildings), the cafe staff, their leaders and supporters (they say let us work and provide for our families), those who are worried about legal issues (they say the business is defenseless), and simply passers-by and residents of the city (they say different things) are explaining their actions.

The news about the area of the Opera are like clockwork. They record a video and then report to the scene and then communicate with the audience.

And since a traditional approach whereby the journalistic material must be prepared using varying opinions, and it is desirable that they counter each other, even contradict, many materials are built exactly in that way.

That is to say, “for and against,” “black and white” or the recently suitably or unsuitably used “revolutionary and anti-revolutionary” models.

In fact, there is a lot of things going on around the Opera.

Concrete, glass, stone and metal, private fountains, ladders and roofs leading to cafes, crushed into one another.

The adjacent area of the Opera has long ago been transformed into a commercial area, with all of the side effects including various aromas, musical cacophony and eclectic design.

And all of this is being unloaded.

After all, it’s hard to imagine what is more beautiful than an empty space.

Emptying is a vital requirement, and the dismantlement in the Opera area visualizes this requirement by starting a complex conversation about the conflict between the private and the public.

Empty areas typically have many entrances and therefore also exits.

You enter the park from the right, pass through the center, turn left and continue the twisted individual route, which was impossible in the last decade in the Opera park because the private interest is based on the idea of one entry (which is also the exit).

It’s easier and more profitable when you come in and out of the same place, and the cafe owners have greedily used this formula by shutting down the alternative paths for entering the park so that they could be the sole dictators of the entrances.

Meanwhile, public spaces imply multiple entrances and exits, which are not countable, because they are discretionary and situational.

If there are so many empty spots in the public park, and there are many diverse entrances, then society is more diverse and broad.

Sometimes it is enough to reduce the open spaces to build a primitive society.

After all, it’s worth remembering that the Opera park of the  “snowmelt” of 1960 was a closed area, the whole park was fenced and locked. There was a key that opened the park and then closed it.

But when the cracks and landslides emerged in the Soviet ideology, Yerevan governors opened the park and undertook the construction of Swan Lake, which in its form and position excluded the idea of closed spaces. It even rebelled against any straight surfaces.

The area flowed either vertically or horizontally, and it was a great entrance-exit in it of itself, without any guidance.

You could go through it a thousand times and choose a thousand different routes.

After Armenia’s independence, there were other leaders who had totally different goals and step by step began implementing them, eliminating all the possible empty spaces and making them busy (with one or two entrances).

The route was drawn out for you at this point.

It may sound odd, but a diverse set of routes today wouldn’t get in the way of our news field. The truth and value cannot go through one entrance and leave from one exit.

In difficult times (as it is now), looking at the facts from opposing viewpoints is not enough.

The empty spaces between the facts are more valuable, which allow for clearing the scene from past corruption, the aggressive dictates of unclear traditions, otherwise, nothing will work out again.

There are two manipulative approaches commonly associated with the territory of the Opera, which are presented as evidence of a diversity of opinions.

The media outlets and people of public interest, who have taken the line of “nothing will work out” do their best to see that the new ones are not really new, but that they are the continuations of the oldest of the corrupt leadership.

Yes, the previous ones were bad, but nothing has changed, they continue to do the same…see how they tear things down so that they can build their own, they do not differ from the ones before…

The news outlets have even announced names of people who have set their eyes on the expensive area and who have the intention to build their own cafes.

This is one of those tricks that is attempted not to raise the already broken one (that cannot be done, even if it is desirable) but to also stimulate the fall of the stable one. That is to say, to drag them down into the pit with them.

Such one-entranced news can be found in the audience, especially when the audience has not yet recovered from the trauma of the revolution.

Let us admit that revolutions are always traumatic and in order to heal it is desirable not only to get out of the revolutionary fluctuations but also from revolutionary rhetoric.

Of course, the mayor of Yerevan is honest with his motives and wants to have his contribution towards “liberation.” But the continuous injection of the image of an eternal struggle in society is also a manipulative and weak step.

The Opera area should not be restored, as restoration means valuing the past model.

The Opera area should be emptied both from concrete and the covers of the Soviet past and from the passionate calls and it is justified and recurring vocabulary.

Now we are witnessing the inevitable collapse of the property and public interests that will continue and deepen, as those with money never cared less about any public space.

The Soviet order had adapted that if it was public then it belonged to no one, and that idea would later be reinforced by the authorities for the past thirty years, creating a widespread tradition of bribery.

And all this cannot be completely explained as “occupation” or “liberation.”

It is worth noting that in these days, the news was not the most informative and reporting not so forward, but the no comment photos and videos were.

The emptied area is one of the most beautiful things that has given a wide range of creativity, especially for photographers.

The silence was very obvious and that was enough.

For example, it was enough to understand how the cafes were disgusted from the soil and grass, that in the case of any small opportunity, concrete was poured over the plants, in order to gain a more profitable area. The concrete is clean, smooth, solid, difficult to escape from under the feet, will not allow insects to live and will not dirty the visitors’ shoes.

But as we have seen, concrete is not eternal, it is a matter of choice. Such a decision is also a matter of not expecting the media to communicate the concrete’s truth.

The media, as well as the owners and employees of the destroyed cafes, are trying to reconsider the so-called class between the private and the public.

And of course, all the possibilities are used to smooth and justify what the owner demands form them. Let’s say to do it in a way that the shoes of the owner don’t get dirty (let the shoes of the person they point fingers at be dirtied), let them, not the public, be protected.

In general, what a senseless word, public…

That question was often given to those gathered in the area of the Opera.

Of course, the private will strive for every centimeter of land or news flow to bring money and when needed to bury the differing opinions under a concrete solution, so that no cluster of suspicion is suddenly left, so that there are no empty spaces left and the flow of money wouldn’t stop.

The news media, which in fact views the public as a case of proportionality, will not hurry to be just the one breaking the news. Perhaps now the cracks are more valuable, by which new conversations can be opened, not with two opposing opinions but with the combination of dozens of opinions.

The private will fit into public speech not as an enemy. And decision-makers will empty the field for those conversations in the most humble and discreet way.

Empty spaces are beautiful and useful as it’s hence there that people think.

And it is very good that the pleasure of being emptied will start from the Opera “circle,” which really has a magical significance.

Yerevan is a plate, and the Opera is the energy center of that plate. It is not accidental that all the important events started here. Even centuries ago, when there was a temple, then a church, then the People’s House.

This circle was a gathering place where you can get energy from entering and exiting from different places. Also, if you want to go through complex connections, to achieve simplicity, both through many entrances and even more exits to help create a person ready to deal with difficult situations so that they don’t need to be guided.

They will know what path to take and what kind of news to read.

Paths and ideas complement each other.

For example, the thoughts born to passengers in closed boxes of anti-hygienic minibusses, drowning in mugham music with their necks bent over could hardly be multicolored and complex.