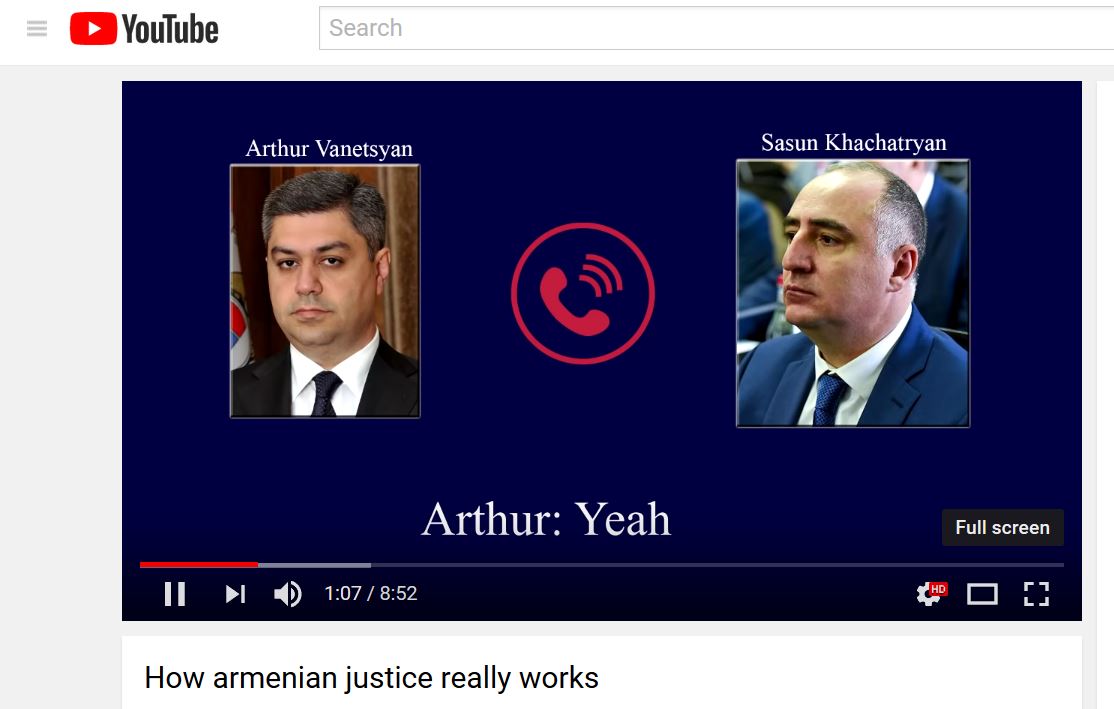 A leaked  recording, where the Director of the National Security Service, Arthur Vanesyan, and Chief of Special Investigative Service, Sasun Khachatryan, discuss the March 1 case and questions of the participation of the Secretary General of the Collective Security Treaty Organization, Yuri Khachaturov and former President Robert Kocharyan, were released on the YouTube channel broshka333.

The English audio recordings were published on the channel in 2018, on September 5. The recording has been distributed by traditional and social media today, September 11. On September 9, it had barely 75 views. On September 11, at 4:30pm the number of video views exceeded 20,000.

The Broshka333 YouTube channel has been registered since 2010, July 5. The video with a the title How Armenian Justice Really Works is the third on the channel.

The two previous videos were published 6 and 7 years ago.

The user Broshka333 carefully hides their tracks. The YouTube channel is not tied to Google’s G+ social network either.

The secret recording of the conversation on the Broshka333 page was first published on Henaran* (it is unclear, as to how they  knew about Broshka333). Then the leak was spread by 168.am,  yerkir.am, tert.am.

At the press conference today, Vanetsyan and Khachatryan said that the secret conversation took place in July. They did not rule out the possibility of an outbreak of new conversations being leaked. So the editors will continue to follow further leaks of Broshka333 (or 334, 335…).

According to Vanetsyan, only the National Security Service has the technical capability of wiretapping in Armenia, but those who have a lot of money can buy special technology and tap in phone conversations.

* Changes have been made in the article. In the preliminary version it was mentioned that the leak was first disseminated by 168.am, not Henaran.