Recognize Those Who Desecrate Art: The Press Gives This Opportunity 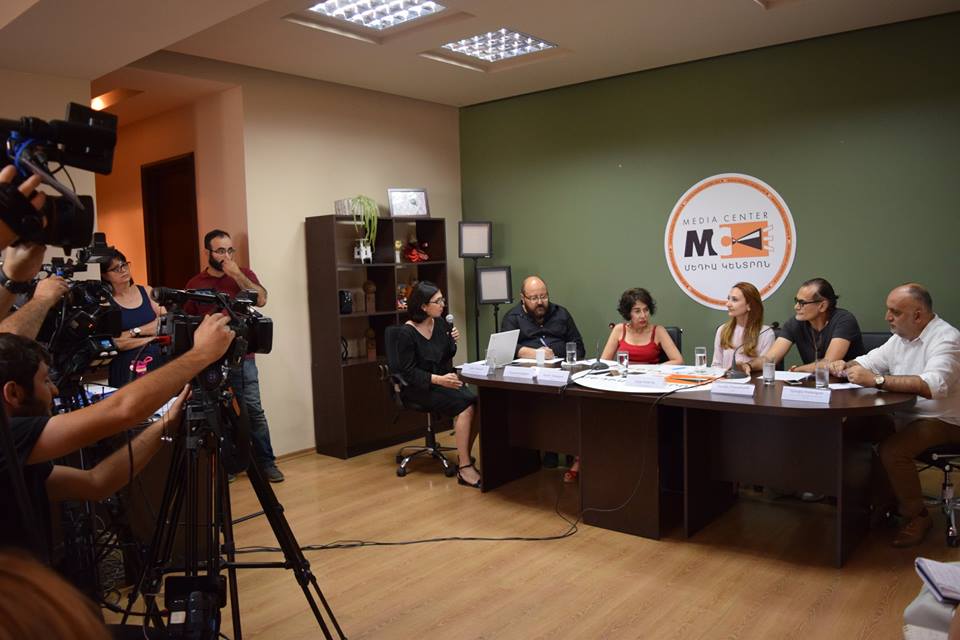 How can a journalist present a specific event in such a way that the reader does not receive any information about the content of the event, but succeeds in insulting specific people using manipulation and preaching intolerance?

The author of the Iravunk newspaper article “For The Minister, A Standard For Being A Cultural Figure Is Propagating Perversion” succeeded in that.

On July 17, we organized a discussion with the topic “Revolution With Or Without Culture?” We thought of the following format:  The Minister of Culture would participate and those artists, who, as a rule, we don’t usually see in “Prime Minister (Minister) – cultural figures” meetings, but who have presented their comments on the cultural policy model in Armenia in the media and on social networks. And aside from that, they are interesting and unique figures of contemporary art.

We invited poet Violet Grigoryan, painter Samvel Saghatelyan, architect Misak Khostikyan and editor in chief of the Hayer media platform Araik Manukyan, who also had interesting suggestions for the minister.

And, here, the above-mentioned article wrote, that the newly appointed Minister of Culture, Lilit Makunts, doesn’t have time for “those who live through and create real culture,” but has time to meet with people who “use culture to propagate perversion under the guise of culture… who desecrate art.”

“Days ago,” says the author of the article, Lilit Yeghiazaryan, “the ministry received in his office (edit: minister) a foreign citizen, Canadian-Armenian actress ARSINE KHANDJIAN, who has great experience in being videotaped naked in films, and wo days ago,  had a discussion with a great master of curses and pornography VIOLET GRIGORYAN, and a man who is so surprised by his own genital organ that it is reflected in his paintings, Los Angeles resident, painter-architect SAMVEL SAGHATELYAN on the topic of ‘Revolution With Or Without Culture.’”

I will not write anything about the professional preparedness of the author of the article, she works, her articles in “Iravunk” are in demand. There’s no problem.

However, it is a problem when the author of the article uses manipulation and doesn’t present reality. She does not clarify where the meeting between the Minister of Culture and the artists took place, thereby leaving the reader misinformed.

It turns out that “the Minister who has no time for those who work with true culture day and night in Armenia,” finds the time to meet artists who “propagate the perverted.”

Not a word was mentioned about what Violet Grigoryan suggested during the meeting with the Minister, or what was discussed by the artists. But the author of the article found it urgent to present a verse from Violet Grigoryan’s poetry, furthermore, after apologizing to the pious reader, “sprout, sprout my little sprout, my tiny little throbber…”

Who is the “genderholic and penis-loving” Samvel Saghatelyan? For any reader who has no idea about the artist, the author of the article presents him thus: “Back in 2013, when all the showrooms refused to display his vulgar photographs, which were dedicated to a strange combination of both female and male genders, to praise transvestites, to give them space under their roof, he finally managed to find shelter in the apartment of filmmaker Shahan Yuzbashyan, where he organized his underground and shameful exhibition.”

Why didn’t the author of the article mention that architects Misak Khostikyan and journalist Arayik Manukyan were also present at the meeting with the Minister of Culture? Why did she pick out the poet Violet Grigoryan’s work “sprout, sprout, my little sprout…,” and Samvel Saghatelyan’s “Phalluses?”

The basis of the article was to manipulate the reader. The Minister of Culture is represented as one who promotes those who “propagate perversion” and “desecrate art.”

Arsine Khanjian is presented to those who may not be familiar with her artistic creations as an actress who “has experience being filmed naked” and Violet Grigoryan as “a great master of swearing and pornography,” painter Samvel Saghatelyan as “astonished by his own sexual organ,” “penis-loving.”

The author of the article labeled architect Misak Khostikyan and journalist Arayik Manukyan as “not having any material” and therefore, did not need to address them, having completely forgotten about them.

As an organizer and moderator of the “Revolution With Or Without Culture” discussion, I apologize to all participants of the discussion for the article “For The Minister, A Standard For Being A Cultural Figure Is Propagating Perversion.”

I am going to apply to the Media Ethics Observatory, and expect its assessment.