Women’s Issues In The Press: “After 25 Years of Age, It’s Unreasonable To Be Called a ‘Maiden’” 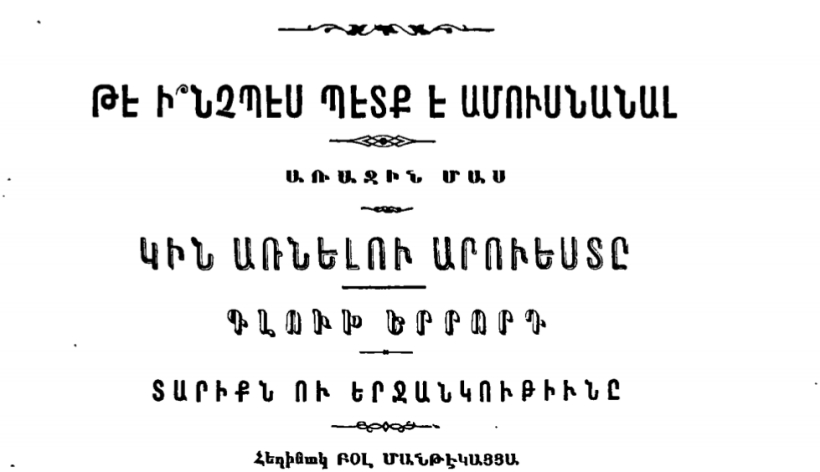 What does a woman want? This is the pressing question that magazines directed towards Armenian women has been trying to answer since the mid-19th century.

The first Armenian magazine to raise the issue was the Eternal Bride, which was published in 1862 in Smyrna.

In the publication, you would find works dedicated to love and advice for women, for example, how to make face powder at home, “After washing the rice thoroughly, put it in a pot of water and let it cook until the water is completely absorbed. Remove it from the fire, spread it on white paper and let it dry under the sun. When it’s completely dry grind it until it forms a fine powder, then sift it through a fine mesh and fill it into paper boxes”(Eternal Bride, 1862, March 1, N5).

Marie Beylerian’s Artemis (Cairo, 1902-1903) magazine raised the issue of women’s rights, “For a long time, my dearest wish was to set up an independent newspaper for Armenian women, which would serve as her free voice. Through it, the Armenian woman would show that she too has the mental capacity for understanding every social and public issue, which directly or indirectly is connected to women’s responsibilities, rights and concerns.”

However, while speaking of rights and freedom, the newspaper insisted that the woman’s place was principally “with the family.”

“We should not openly preach freedom to women, not because a woman does not have a right to it rather, because we are convinced that the family home is a place of particular importance for a woman.”

For this magazine, feminism is an intolerable phenomenon, which is based on women’s subconscious revenge on men for the “age old injustices” perpetrated against them (Artemis, 1902, January 1).

We read in the article The Woman In The Life Of A Bachelorette, “almost the majority of virgin women lead single lives like shameless people dreading married life. This is extreme. One of the most fraudulent aspects of single life is bearing the title of maiden. It’s also generally ugly for older girls.”

How do we solve the problem? At the age of 25, a girl’s father should place a ring on her finger, and she should “automatically” be called madam. Until she de facto receives that formal title…

Making calculations to get married to a rich girl or man, is perhaps an eternal problem. “Pitiful people, when will our girls and boys understand, that when looking for a spouse based on financial terms you can at most find a partner, but never a soulmate.”

The conclusion: It is better to be poor, but have a loving spouse with which to break bread, than to be rich and eat “grilled chicken” with a spouse that you hate (Light, 1907, July 4, N2).

The newspaper Flower conducted a study to find that men with the intent of marriage prefer brides who have “a large dowry, let them say whatever they want, this is the stark truth” (Flower, 1897, June 5/17).

There was definitely a place to advertise care products in women’s magazines, for example “Crème Simon, which was invented in 1860, and is accepted by stylish women all around the globe. It won a Gold Medal at the 1900 Global Art Show. Do not hesitate, demand the real Crème Simon, and you will stay forever young and fresh, while your neighbors will get old and regret their poor decisions” (Flower, 1908, July 10, N8).

Soviet women’s magazines didn’t even mention a hint of makeup or accessories, as women were expected to be masculine, strong and devoted to communism.

“On March 8, 1926, you the women workers of Georgia, Armenia and Azerbaijan ought to gloriously celebrate your international holiday by swearing that all of your strength, all of your energy will be used to increase the country’s industry and agriculture. That is the kingdom of communism” (The Transcaucasian Woman Worker, 1923, N 1/2).

Working women of the 21st Century would have been envious of the conditions which were created for the women who dedicated themselves to communism:

“In Tbilisi, the best conditions for motherhood and childcare are found in cigarette trust factories, which have 4 cribs, all of which, to be honest, are in exemplary conditions. Now, a woman worker who is nursing a child can feel at ease working at the cigarette factory, knowing that the child is being well cared for. Thanks to the fact that cribs are found near the factories, the woman worker has the opportunity to feed her child every 3 hours” (Ibid).

The heroines of every issue of The Armenian Woman Worker magazine are masculine women who can do men’s work if not better than, then equally as well as men.

Here is one such an example, “Raisa Dudkina was not attracted to the comfortable and clean work of an office. She dreamt of men’s work.”

Whether in a factory or at the steering wheel of a steam engine, a woman is a woman. She desires to be beautiful, which was not possible in Yerevan wearing the products of The March 8 Outlet.

“The clothing is reminiscent of a simple bag which doesn’t have any shape. Recently the outlet has begun producing large quantities of women’s and children’s clothing, which are so tastelessly sewn, that you can’t even look at them (Ibid.).

Today the internet is flooded with the issues of modern women. They are also trying to find the answer to the question “what does a woman want?”