Municipality Became Co-Organizer of Direct Action Thanks to the Media 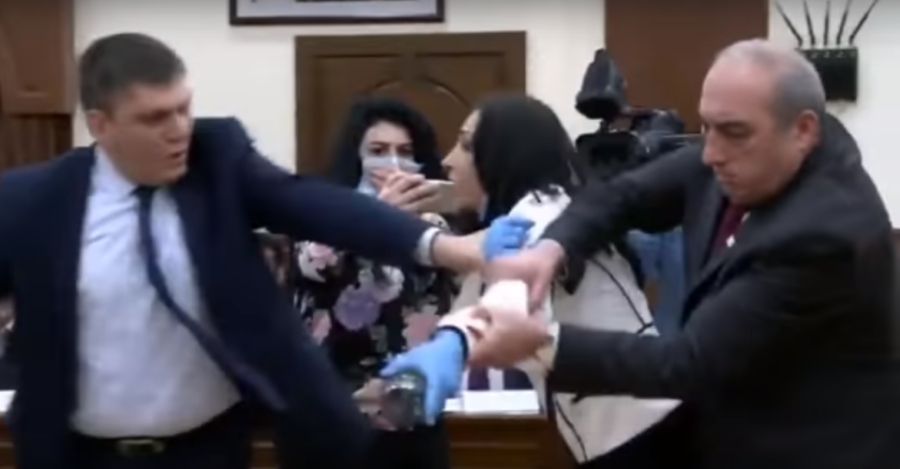 On February 13, Yerevan City Hall became a newsmaker. It was not by its own volition, but due to drastic interference that the municipality’s first meeting this year attracted the interest of all Yerevan residents — unheard of for Yerevan and even the provinces.

Two members of the Yerkir Tsirani political party (later actions showed that it’s important to mention they were women) with medical masks and latex gloves entered the meeting hall and poured a murky liquid from glass jars on the ground in front of mayor Taron Margaryan.

“Stop them, stop them…!” instructed Margaryan and what followed was confusion, “neutralization,” and ultimately, shame.

Since numerous journalists were present, all the news outlets video-recorded and broadcasted the incident, the jostling, the two women’s direct action, and the violence against them.

And it became clear that the meeting was no longer seated; standing up and wanting to maintain their own (as well as the state’s) peace, a group of senior council members in suits and their bodyguards (also in suits) forced out senior council member Marina Khachatryan, hitting, pushing, slapping, and pulling her from her hair.

One got the impression that meeting participants had become so scared of the dark-colored fluid, that they were ready to annihilate their colleague.

The contents of the jars initially were unknown. 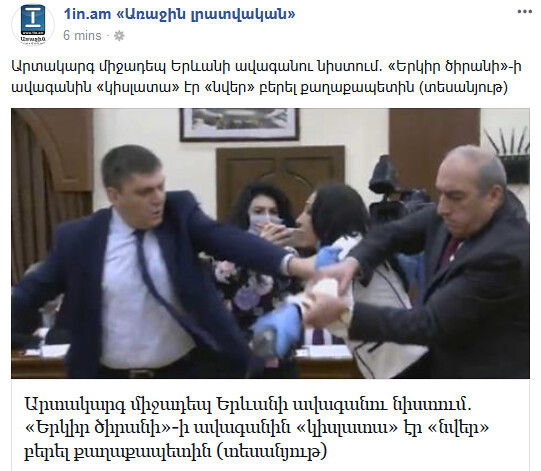 The word kislota caused terror; it was simply unknown specifically what type of acid was being referred to. If sulfuric acid, then of course, it turns out that Marina Khachatryan had planned a terrorist act.

If she had decided to burn and irreversibly damage the faces of those present, then of course, it was necessary to hit her, push her, and remove her by pulling her hair (even more — you could, for instance, stab her).

Then news circulated that the jars contained sludge. And even later still, video footage helped us understand that Khachatryan is saying that in the jar is water from the sewer of Nubarashen Penitentiary, the smell of which has spread to Nubarashen, since the water supply system there doesn’t function normally.

The media sector (also the Republican Party of Armenia [HHK], to whom the mayor’s seat belongs) for a long time was unable to decide how to qualify what happened. Ultimately, it seems they settled on the word “brawl,” which assumes the equal participation and share of guilt from both sides.

The sewage water’s contact with the neat and tidy hall and that during a meeting that from Soviet times implies unconditional seriousness was one of those acts that can be considered political protest action, if the public takes ownership of this act.

This act seemingly interests as yet only the media sector. Especially since journalists were also subjected to violence, and the municipality’s public relations officers and the mayor’s assistants also obstructed journalists’ work.

In history, there are many examples of how art serves the state (the best example of this is Yerevan City Council’s artist members), but few are those examples when the state serves artists.

Yerkir Tsirani’s direct action, of course, was not planned as a work of political art, but it became a demonstration of political “actionism,” the meaning of which was not at all the sprinkling of a liquid of suspicious origin and odor, but the reaction to it.

Yerkir Tsirani members Marina Khachatryan and Sona Aghekyan, who experienced blows to their bodies, in the silent and taken-aback presence of several dozen “people in charge,” of course were expecting a reaction.

But what’s important is that the reaction was unexpected for those who themselves reacted (the hitters, pushers, and again hitters). They were hitting, pushing, and again hitting, in front of the cameras, unwittingly becoming media figures.

And when the meeting resumed, deputy mayor Kamo Areyan made such remarks and drew such a conclusion that at once completed this “liquid action” that had a female face and a male counterattack.

“Honorable mayor, my deep respects for your balanced attitude and balanced, cool, and sober measures becoming of a politician,” he began.

And then he asked, who will answer for this unpredictable behavior and breach of order, since it must “be guaranteed that the meeting will go on in a safe and calm environment.”

“Calm” is a key word, which was explained as follows: “So that people will be able to carry out their work creatively and in an orderly fashion… For an arbitrary person leaving their house to not come to this building with arbitrary materials and tools.”

There are many meanings between “arbitrary” and “calm” that can be interpreted creatively. For example, like ArmComedy.

“We’re obliged to uphold the council member’s high calling, to not concede positions of responsibility… And to not yield anyone’s responsibilities and to no one. What was done was an irresponsible act that exceeded the last degree of cynicism. That arbitrary material appearing in those containers was unpredictable.” These words of the deputy mayor’s are very easily deconstructed and reconstructed as text commenting on the actions of the hitters, pushers, and again hitters.

The media sector has much to do to “creatively” maintain its “high calling” and “to not yield its responsibilities.”

Especially since the leader of Yerkir Tsirani, the organizer of this direct action, offers the same textual and semantic level as target of the action city hall: she says that everyone must be “poisoned.”