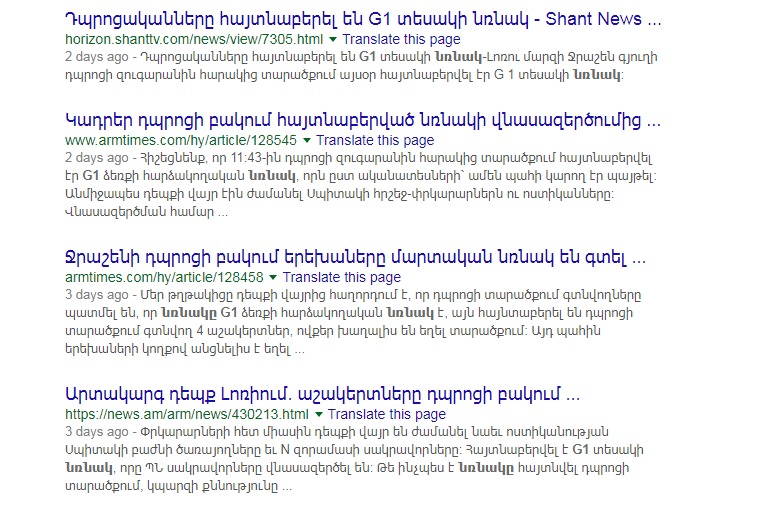 Recently, a grenade was found in a school in Armenia. All the online news media reported the incident. Or almost all of them.

I had photographed about a hundred of these finds for my photography project “Deadly Toys” in the 2000s. That’s why I more or less know about weapons that have been abandoned after the war.

Armenian news outlets called the grenade “incendiary,” but this fact could’ve also been ignored. They even invented a name for this grenade: G-1. 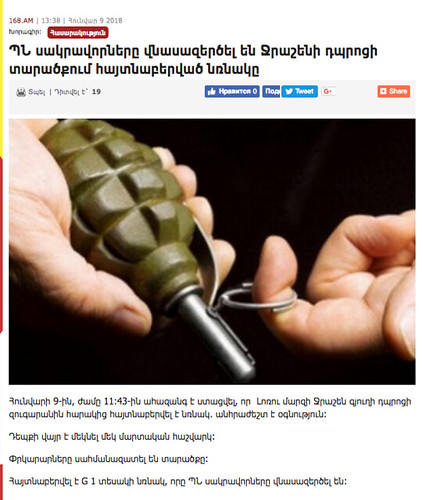 In all likelihood, the foundation was laid by some news site: some “office nerd” confused the letters “F” and “G” on the keyboard (they’re next to each other; one’s finger could easily click on the unwanted letter), and the others pilfered the information and republished a story about some imaginary “incendiary” G-1 grenade. 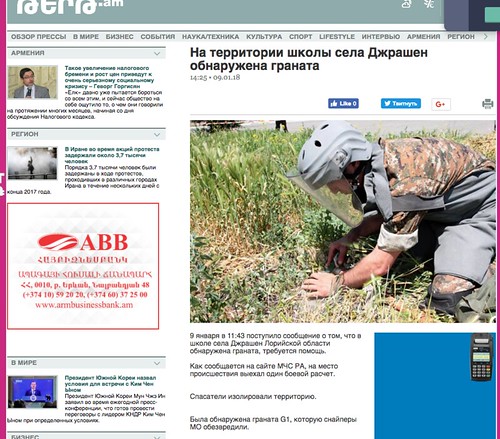 At fault are the editors. Though this cannot be considered fault, but shocking negligence. Even now, when every more or less remarkable piece of news can be verified online through many means, journalists don’t want to waste their precious time on accuracy.

The consequence: the non-existing “incendiary” G-1 grenade is circulating ruthlessly and without hindrance in all the media outlets and newspapers.

But such a grenade doesn’t exist. Or rather, there is such a thing — in the video game Battle for Utopia. Also there are fictional “stasis grenades,” but our journalists fortunately haven’t gotten to those yet. 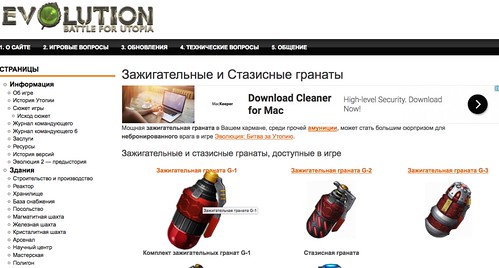 Recalling the years of my youth, I assure you that the USSR did not produce an incendiary hand grenade. The meaning is even obviously incomprehensible. To burn what? To burn who? Even now in the entire world only one type of incendiary grenade is produced: AN-M 14. And the manufacturer is the US.

Presumably, they began to produce this grenade to force Vietnamese soldiers to come out of underground shelters.

But the purpose of my article is not to raise the level of journalists’ literacy. That’s their personal business.

I’ve noticed that almost all the media outlets have illuminated the news of this deadly find with photos of a P-1 grenade. Only Aravot newspaper used the photo of an RGD-5 grenade. Under no circumstances are either of these two grenades incendiary. Both are fragmentation grenades.

Let’s overlook this too. It has long been known that the use of “symbolic” photos acquired online is fraught with the loss of confidence in the news outlet.

But economically benefitting by cutting back on staffing a photo editor, the person who edits the photos much like it is done with text, forces chief editors to print such absurdity about a video game’s “incendiary” grenades. But staff reductions, I repeat, are their personal business.

I was surprised by the fact that 1in.am surpassed them all and depicted through an eyewitness’s lips the tactical characteristics of this non-existent grenade. Supposedly, its radius of operation is only… 25 meters.

P-1 is a defensive grenade, thrown from a hiding place on an attacking opponent; 300 fragments definitely kill up to a distance of 50 meters, and the safe distance is 200 meters. 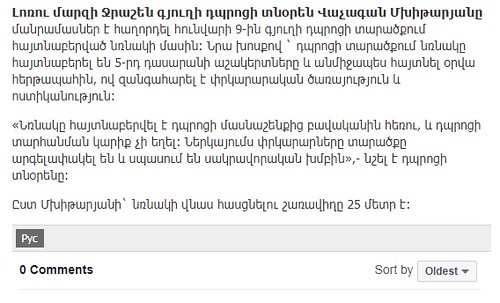 Now picture that someone (especially inquisitive children) reading the claim on the 1in.am website, finds a P-1 and pulling the trigger, throws it 30–40 meters away. And don’t children behave this way, when finding such “deadly toys”? At one time, I photographed about 50 children who became disabled, losing their limbs or their eyesight, because of such experiments with “deadly toys.”

I even printed a large number of posters that depict all those combat weapons that are life threatening if you try to touch them. And I myself distributed those posters to the border villages in Armenia and Artsakh.

Such news articles with “symbolic” photos undo the immense work that numerous people have done to warn children about danger, and they hide the deadly danger to readers’ lives.

This is no longer negligence to which we can turn a blind eye. This is clearly fake information, which is fraught with the threat of death.