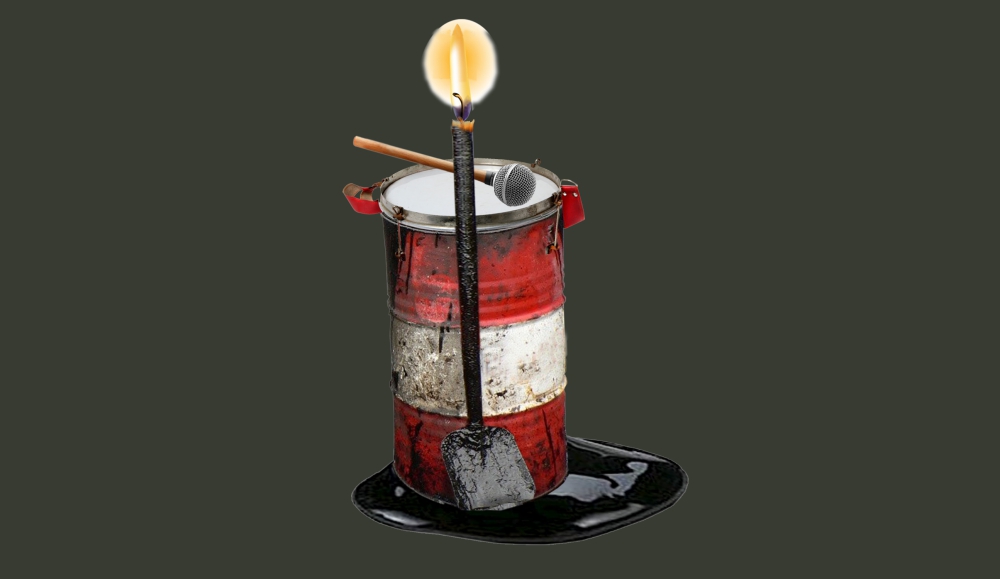 Independent Armenia’s first corruption scandals were a “heavy legacy of the past.” This expression was used in the USSR to criticize the czar rule, but the culprit of the victims and enormous destruction of the1988 Spitak earthquake was Soviet rulers’ bribery, the almost legalized theft of building materials.

Moreover, many of them managed to direct their pockets to the vast bulk of the enormous aid the country received, the “revenues” to possess the levers of distribution of the temporary dwellings and apartment units (I’ve covered this topic in depth in my “Earthquake in Soviet Media” article series).

After a change in administration, justice and order were still not established in the disaster area. Azg newspaper editor Hakob Avetikyan recalls the enigmatic fate of a huge intentionally unused donation during the term of the new government.

In the early 90s, it was a chaotic situation in the disaster zone, while in Yerevan, entering any grocery store, you could see… bottles of French cognac. They were the 51-million-rubles purchase of Yerevan City Hall, made with the purpose of replenishing the municipal budget.

The deal was criticized by the opposition press of the day, but ultimately corruption was not found to be a component.

Not counting this surprising story — the first accusation of the crime of corruption carried out systematically and “with high patronage” was probably proclaimed to be the “devoured mazut” case.

What was the nature of the case? In 1992–1995, the situation was grave in Armenia, particularly in the energy sector. The termination of centralized heating, daily two-hour electricity supply. Until just a few years ago, there was 24-hour electricity, and cheap, 4 kopeks for 1 kilowatt (0.025% of the average salary); moreover, many reached an understanding with the “light man” and, putting money in his pocket, would stop the meter.

And so news spread that sufficient mazut (fuel oil) had been imported into “dark and cold” Armenia, and electricity is produced, but the government is grounding the power to make the population poor. Member of the first to third convocations of the National Assembly Arshak Sadoyan became the pioneer of another theory, that the mazut was “devoured.”

After the resignation of first president of the Republic of Armenia Levon Ter-Petrossian (1998), with Sadoyan’s strong demand and new president Robert Kocharian’s approval, a new parliamentary committee was established that was to study this matter, declaring its official purpose “The1992–99 import of energy suppliers and the use of produced electricity, as well as the effectiveness of individual loans to energy.”

Comprising the committee were members of Ter-Petrossian’s opposition, one of whom, Manuk Gasparyan, called what happened “plunder” even before the findings were summarized.

The committee’s semi-annual activity report, published in June 2000 (the full version was published in Hayots Ashkharh newspaper, June 15, 2017), stated that “in 1992–95, the volume of mazut not imported was 305 thousand tons, a total cost of about US$25 million.”

Later, also heard in the National Assembly was “The report of the Government and Prosecutor General on the issues and conclusions outlined in the committee’s report,” which, according to the same newspaper, “to put it mildly, disappointed everyone” (“The Prosecutor’s Arguments Weren’t Impressive at This Time,” Hayots Ashkharh, October 26, 2000).

Of course, we must take into account that “everyone” was the Armenian Revolutionary Federation (ARF), with its media outlets, the other opposition forces of the early 90s. After this disappointment, they stopped being occupied with the “devoured mazut.”

Before that too, the media’s critical reports more so described the difficult situation than substantiated the accusations.

Publishing a lengthy analytical piece was Hayk, the official paper of the “accused,” the former ruling party (“Crater,” March 5, 1999), which listed the people directly responsible for mazut’s import or the disclosure of that case, who during Kocharian’s rule later occupied higher positions.

“RA deputy energy minister Yervand Zakaryan should have brought fuel, resolving the front and back issues. … At the start of March 1993, one of the agenda items on several subsequent meetings of the operative headquarters adjunct to the government was where did the so-called purchased 70,000 tons of mazut go? … Let us say that the government never managed to find the answer to this question. … The government was satisfied by dismissing Yervand Zakaryan from his post on March 17, 1993. … The RA prime minister instructed general prosecutor Artavazd Gevorgyan to investigate the ‘mazut case.’ The prosecutor, in turn, assigned the investigation to special cases investigator, Supreme Council MP Aghvan Hovsepyan” (March 5, 1999).

“Not evidence, but shouting is what’s important for Mazut Arshak. And our society, it is known, has always liked shrews. That the RA general prosecutor’s office exercising all its possible and impossible efforts was unable to find even the committee’s former delirium, $200 million, is not evidence and rationale for Mazut Arshak” (“Energy Sting: Arshak Mazutich’s Odyssey,” December 21, 2001).

The topic of the “devoured mazut” experienced a brief revival in 2007, most likely “ahead” of the 2008 presidential election, when Robert Kocharian’s adviser, ARF member Bagrat Yesayan and Pan-Armenian National Movement (HHSh) vice-chair Andranik Hovakimyan debated at Hayeli Press Club.

168 Zham newspaper presented the parties’ arguments in detail: “At the start of the debate, R. Kocharian’s adviser stated that he has a few questions for the HHSh vice-chair that, according to him, the public is very much concerned about. And they were off… the ‘lolos’ of ’the dark and cold’ years, mazut, and ‘surrendering’ Karabakh. In response, A. Hovakimyan said he wasn’t expecting such primitive talk, but he nevertheless reminded him that the energy crisis that arose in almost all the post-Soviet countries was overcome first in Armenia, when HHSh was in power, in 1995, immediately after the ceasefire was established. The head of Hayeli who was moderating the discussion remarked that though, for example, when during WWII Leningrad was besieged, many people were starving and bore untold hardships, today those years are proudly remembered because it became possible to face those hardships and defeat the enemy” (“Their Weapon is Demagogy,” September 14, 2007).

The last big reference to the “devoured mazut” that is available through an online search was on Tert.am, in 2013, on occasion of the remote Arshak Sadoyan–Hrant Bagratyan debate. The site with the headline “Sadoyan considers Bagratyan’s statement about the ‘devoured mazut’ a blatant lie, although the archives say differently” informs:

“Tert.am was unable to get official information about this from the Prosecutor General’s Office. … According to the internet, … we found a 2004 Chorrord Inqnishkhanutyun archived news story that stated that in the report of the corresponding committee created with David Lokyan’s leadership, apart from Hrazdan Thermal Power Plant Director Marat Martirosyan, no other name is mentioned in the ‘mazut case,’ who, according to Chorrord Inqnishkhanutyun, was arrested in a completely different case. ‘It’s noteworthy that later he was not only released, but also appeared in the ARF electoral list in 2003’” (“Armenian ex-premier’s statement ‘barefaced lie’ — Arshak Sadoyan,” September 29, 2013).

It is remarkable that the site didn’t continue the investigation, being satisfied with the bewilderment of the Office of the Prosecutor General’s mysterious silence. And more surprising is that the media practically hasn’t inquired into the abuses committed in 1998–1999, during Robert Kocharian’s rule, when in just two years, the losses in the energy sector were far greater than in 1992–1995: $150 million.

In Lragir.am chief editor Haykazn Ghahriyan’s opinion, corruption became systemic during Robert Kocharian’s rule. Prior to that there was negligence, wretchedness, and undoubtedly also abuses, but there was no corruption pyramid as such.

Something else that’s surprising: few are not only fundamental analyses on the “devoured mazut,” but also the simple mention of mazut in the media of 1992–1995.

Perhaps the mystery of the “devoured mazut” can be solved through recovering the overall picture of that time, which is recovered also with the help of the media’s daily reports.