Use of Facebook Ads in Armenia’s Parliamentary Election Campaign 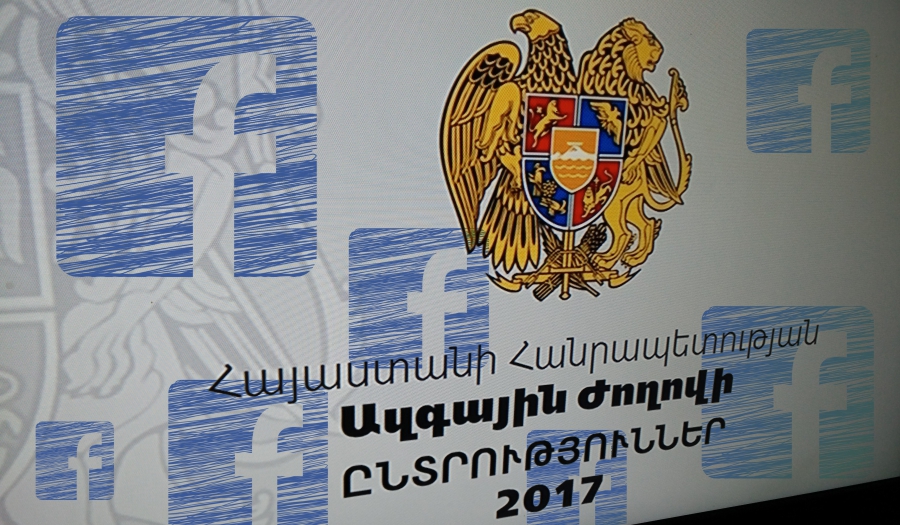 Campaigning for the upcoming parliamentary election has barely started, but political groups have already begun using social media. Of course, there are fake accounts, and evangelists tantamount to fake accounts. But today we’ll talk about the use of Facebook advertising.

Without a doubt, monitoring the entire volume of placed ads is impossible, but a conclusion on approaches can be made from the ads already placed. For instance, all of ELQ bloc’s candidates are now opening individual public profile pages and advertising them through Facebook. Which is rather questionable since the pages are newly created, and it will be difficult to gather a large following by the elections.

On the other hand, if a person wants to promote himself through a personal ad, then using the page becomes helpful since Facebook doesn’t permit using personal accounts, only pages. Using the opportunities afforded by pages is, for example, Vahe Enfiajyan, who is in a more favorable situation than other candidates since he’s using a page with a longer history and larger audience. 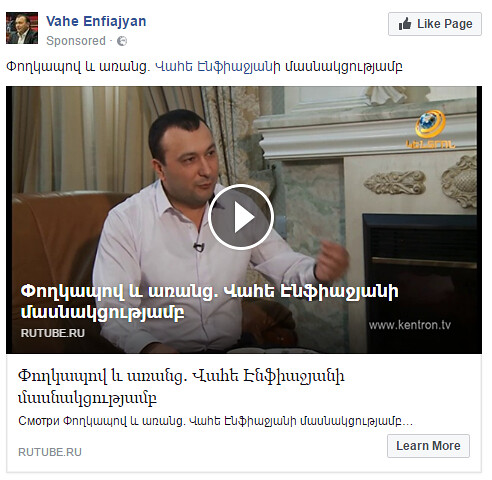 Nikol Pashinyan of ELQ likewise has a large audience and uses his page not only for promotion, but also to make practical announcements. 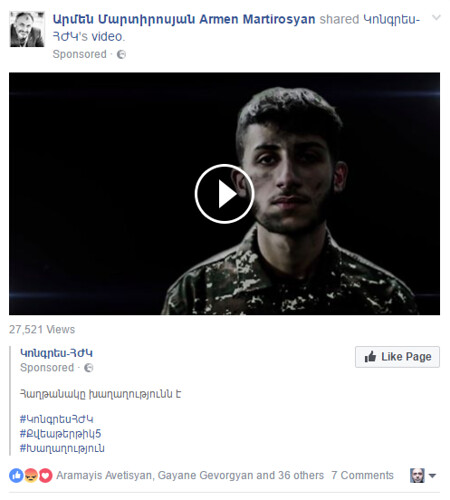 In general, it can be noted that some political groups are abusing hashtags. 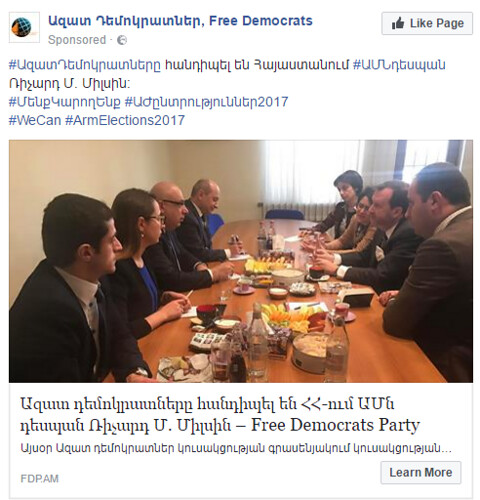 One also comes across inexplicable instances, when pages having no direct link to political groups appear as the disseminating page. This is probably an attempt to create the impression that the people think like them too. Or the party placing the ad simply doesn’t take an interest in the matter. 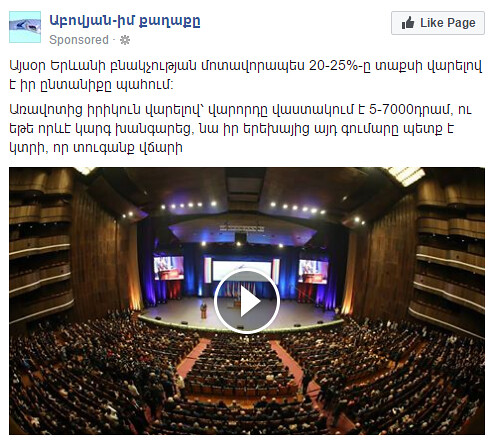 The ad below also creates the impression that the people, and not the politician, is talking. [Account name is “Yerevan is talking”; ad promotes Prosperous Armenia party leader Gagik Tsarukyan.] 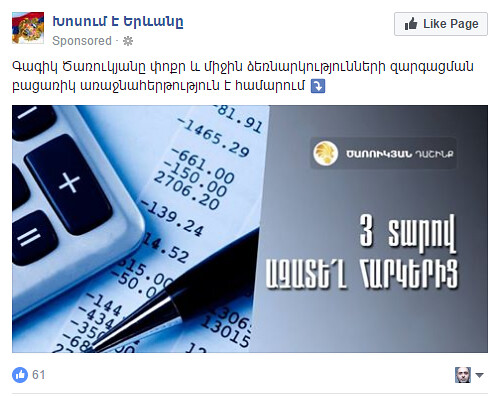 There are even more heinous incidents, whereby a certain “Le Rudwolf” energy drink recommends a candidate in quite an unprecedented way. 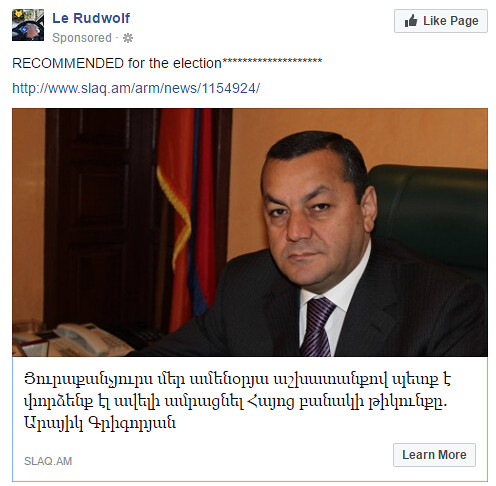 Those placing ads are often not careful; they don’t evaluate how content is presented in Facebook. For example, in the Ohanyan-Raffi-Oskanian (ORO) bloc ad below, the leaders’ faces are cut off. 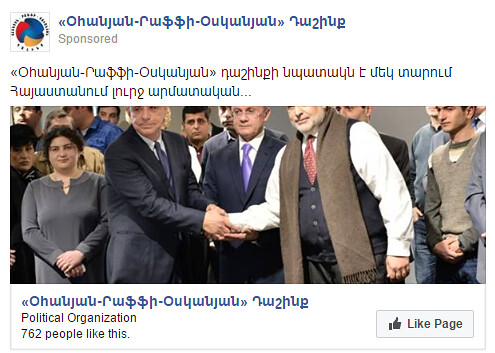 And in the example below, the Armenian Revolutionary Federation (ARF) candidate’s statement is nearly impossible to read without a magnifying glass. 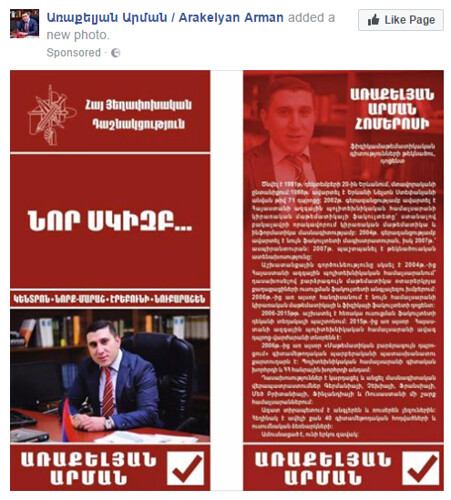 Apart from obvious political ads, inexplicable sources come out on the scene. For example, some account shared an RFE/RL Armenian service (Azatutyun) video as its ad. Of course there is political campaigning here, whereby an attempt is made to hide the real, original source. 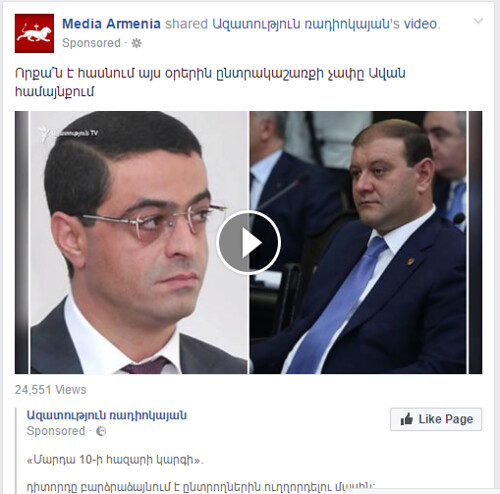 It may be assumed that an anonymous and humorous page called “Amusing Elections” [below] was created simply by some unknown activists. But when one sees the second video paid add, it becomes clear that everything is not so simple. 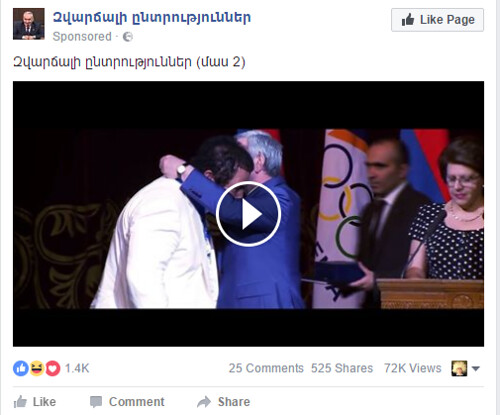 One also comes across ridiculous instances, when political processes are used to disseminate games. An ad is place on an ad, accompanied by the words “WRITTEN IN ARMENIAN USING THE ROMAN ALPHABET > DON’T DO SUCH THINGS < THIS IS NOT A GAME.” 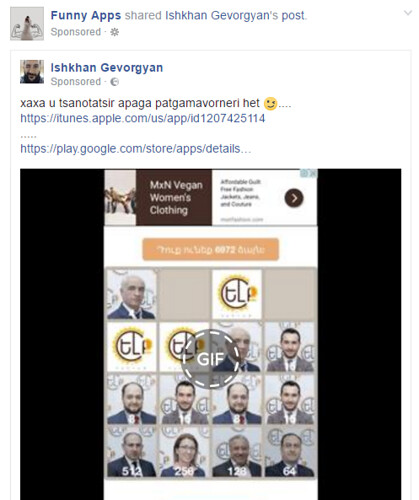