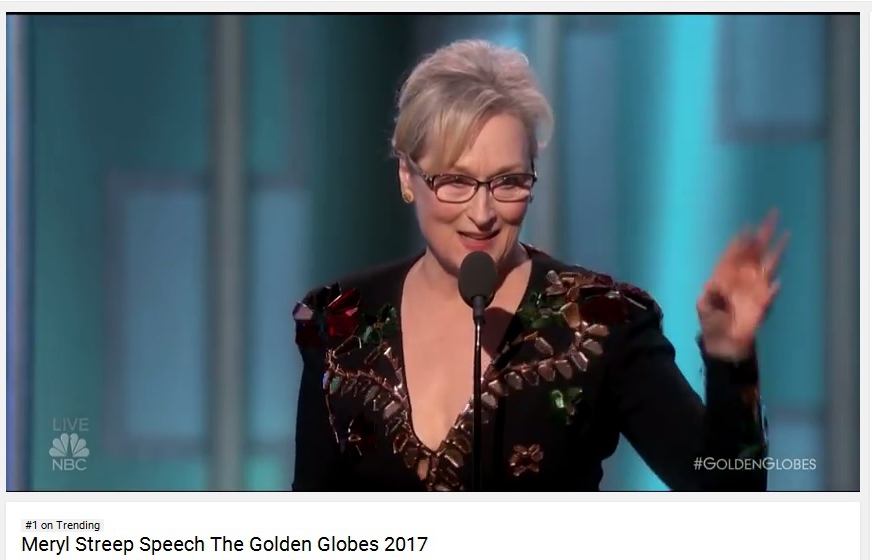 First of all, it was unexpected (an acceptance speech is usually compassionate and friendly, beautiful and non-provocative) and expected at the same time (the emphasis on the responsibility that comes with role play was long overdue).

Meryl Streep had a message to deliver and she delivered it. She spoke about Hollywood, foreigners and the press. And she reminded us about a moment when the person asking to sit in the most respected seat in her country mocked a disabled reporter.

Moreover, Meryl Streep did not mention the name of the official, or the reporter subjected to mockery. She simply suggested thinking about what happens when a person in power humiliates another person unequal in physical capacity, in other words, the other, distinctly different person.

When something like this happens, the society essentially is given a carte blanche to do the same.

“There was one performance this year that stunned me. It sank its hooks in my heart. Not because it was good. There was nothing good about it. But it was effective and it did its job. It made its intended audience laugh and show their teeth. It was that moment when the person asking to sit in the most respected seat in our country imitated a disabled reporter, someone he outranked in privilege, power, and the capacity to fight back. It kind of broke my heart when I saw it. I still can’t get it out of my head because it wasn’t in a movie. It was real life. And this instinct to humiliate, when it’s modeled by someone in the public platform, by someone powerful, it filters down into everybody’s life, because it kind of gives permission for other people to do the same thing.”

Meryl Streep was talking about the newly elected US president Donald Trump’s mockery of the New York Times disabled reporter Serge Kovaleski. Of course, everybody is playing a role most of the time. The problem is that the role can be bad but still effective. As the actress stated, it can make “its intended audience laugh and show their teeth”. As a result, it can lower the bar for human respect and dignity.

By mocking the other, you run yourself into a trap, because eventually the instinct will overcome the conscious and will open the gates to the unconscious aggression.

“Disrespect invites disrespect. Violence incites violence. When the powerful use their position to bully others, we all lose”. This quote by Meryl Streep has been shared extensively by the press.

Interestingly, the actress spent half of her speech listing names and birthplaces of her colleagues. They all are different, from different countries and cultural backgrounds. And it is that difference that is at the core of Hollywood strength and diversity.

Strength comes from diversity, not from the worship of sameness nor the blind belief that being part of a crowd gives you the right to stone others, or a higher ground from which to look down upon others.

When some Armenians living in Armenia spoke harshly against a family photo of a foreign man in the traditional Armenian costume (that took over social media with #հայուգեն hashtag), they spoke from a position of a defeated.

Theirs was not a position of strength, only an ambition to admire their own weakness. And the bigger and more prevalent that ambition becomes, the more visible is the society’s weakness.

Armenia does not have an artist like Meryl Streep who could, with such ease, bring the most critical issue of responsibility to the public’s attention.

Somebody who could also show that reporters are now at the forefront of responsibility. They are professionals, who just like artists, play roles and influence society.

“We need the principled press to hold power to account, to call them on the carpet for every outrage.That’s why our founders enshrined the press and its freedoms in our constitution. So I only ask the famously well-heeled Hollywood Foreign Press and all of us in our community to join me in supporting the committee to protect journalists. Because we’re going to need them going forward. And they’ll need us to safeguard the truth.”

Meryl Streep’s speech caused an uproar in media and prompted many to reconsider the strange reality as of late, where many things became permitted, yet we hardly register any gains.

It is no longer possible to separate art from politics. Moreover, it is dangerous to say that you only interested in creating art and don’t care about political developments.

A human being is neither a beast nor a clown. The ability to mock and devalue key concepts is used very effectively by those in power. People, whose job is to create, are the only effective force for those in power to understand and accept the limits (far from being a beast or a clown).

People, whose job is to create, need to take good care of themselves. Reporters included. They do need to be self-centered, to love their own person and not to spoil themselves. It’s when they start to care about the others instead of themselves that their voice acquires a fake and a destructive tone. Moreover, it destructs the very ability of artists to create.

This was well observed at the recent meeting of the Armenian president and “intelligentsia”. There was a talk about violence during the meeting as well. The last word, however, belonged to the president and not the artists. The artists were not heard. Unlike them, Meryl Streep was heard. She was heard because she reminded us of the privilege and the responsibility of the act of empathy.