Happy and Hard Work, For the Sake of Emptiness 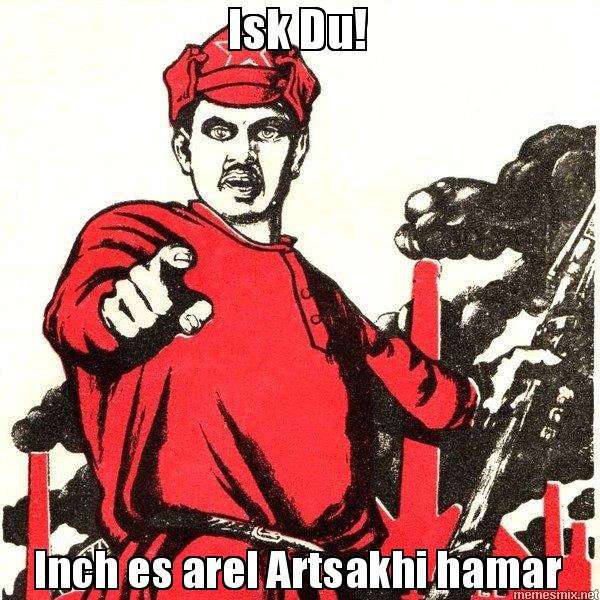 The Republic of Armenia’s Ministry of Diaspora has regularly issued calls. The last of which was this: “What are you doing for Karabakh?”

On its website, the Ministry announced that this is becoming a pan-Armenian movement. The simple logic allows the call to become a movement, in which it is announced, that each is required to report to the Ministry what they are doing (now) for Karabakh. How can they report? With photos.

The Ministry opened a special Facebook page where it accumulates the example photos from the call.

“Join our Facebook page: What Are You Doing for Karabakh? and follow the movement’s process and be a part of this wonderful pan-Armenian initiative. Launching this initiative and with the intention of publicizing this to the world we ask that you be photographed clarifying “What are you doing for Karabakh?” with the poster (it is attached) and send it back to us in order for it to be published and disseminated on our Facebook page and media,” it officially states.

Being photographed is an end in itself, which has no further adaptability, it’s just an exhibition with posters.

It is that way, no matter how much it is self-proclaimed to be a “wonderful pan-Armenian initiative.” It is interesting, what they mean by saying “initiative.” And movement? Especially if the photo is a time-freezing trick.

Of course, the Ministry of Diaspora, with its texts, calls and way of thinking, is unique and very old-fashioned, but the issue is that it (as well as other different institutions) writes press releases and is actively engaged in social networks.

And many media disseminate the press releases without changing them, as another official document, which does not even have the potential to become news. Honestly speaking, press releases for the most part are not even able to be edited, since the dilution of meaning is their ideal match, if you try to rewrite them logically, the entire text will fall apart.

A lot of media outlets do not want to plunge into messages, to search for meaning, so they simply publish another pathetic-bureaucratic script from the Ministry of Diaspora or they quote it verbatim.

This is a long but remarkable quote, which needs an explanatory dictionary, since it is required to translate it from the bureaucratic language into Armenian.

“The Minister ordered for the “What are you doing for Karabakh?” movement to be more consistently organized and disseminated, widely cover the the activities carried out within Diaspora communities and the Ministry’s activities, at the end of the week summarize and present at the Armenian government’s Information and Analytical Centre. The Minister highlighted the consistent implementation of working towards solving prevailing problems.”

If we try to connect with each other with Soviet bureaucratic language and with the urgent call of “What are you doing for Karabakh?” an impression will be established that we all found ourselves on the verge of a bloody revolution that existed a century ago. The question itself implies that we are doing something, since if we are not, there is a punishment waiting for us.

Let’s say, they are able to say that if you do not take photos, then you are doing nothing. Therefore, you are against Karabakh.

Recently the Prime Minister of the Republic of Armenia gave an interview and said that it is necessary to change the image of those serving, but no one expected that those changes needed to be towards the lexical mist and imperatives, which constitute the core of the two-sided systems.

“We are making a call in 2017 that all events organized on behalf of the diasporan communities be dedicated to Artsakh (festivals, cultural events, competitions, concerts, exhibitions, fundraisers, etc.),” reads the Ministry of Diaspora’s appendix-website.

For example, if in our village there is a dance festival, I am able to stop and say that I am dedicating my dance to Karabakh. And later I can add that with that I am joining the “What are you doing for Karabakh?” movement. Basically, my movement (the dance) will not remain as that, rather it will be a dedication (as ordered by the Ministry of Diaspora).

And in that case where my dance (the event) becomes a dedication, what will they say–well done for dedicating your ability to the pan-Armenian idea.

The fact remains that the ministry views this type of news as important and will reproduce photos on its website found on social networks. It is evident that, for example, Munich’s Armenian school, which, “thanks to the hard work of volunteer teachers has formed a solid foundation today for the development and preservation of the Armenian language,” has joined the “What are you doing for Karabakh” call.

Basically, it has “dedicated” its “hard work,” in the way that was requested of them.

The pupils of the school took the photo approved by the ministry by taking a group photo and later sending that photo to Armenia, in the hope of seeing it on the Ministry’s page.

The Ministry is pleased.

Or it is simply having fun, creating the illusion of “hard work” without even concealing that its image (empty and pompous) will remain unchanged.

The Minister of the Diaspora stated (and to the state news agency) that it is good when “the family raises their children with a great patriotic pathos.” And that means that “the children are defending their homeland’s borders.”

Let’s put aside that “great pathos” and “patriotism” are inversed things, the important thing is that the Minister is mistaken, the homeland does not have borders. The homeland is just a perception. Just like the Diaspora.

The structure of the Ministry of Diaspora is impressive, especially in the format of an infographic.

It is able to send us these types of public appeals, so that we find ourselves on the stage of the absurd theatre, as actors, where zombies are writing the roles.

And as long as we are not zombified beings, we are able to take a photo with a poster-call, send that to the Ministry with the following answer: “I am thinking. That is what I am doing. And you?”