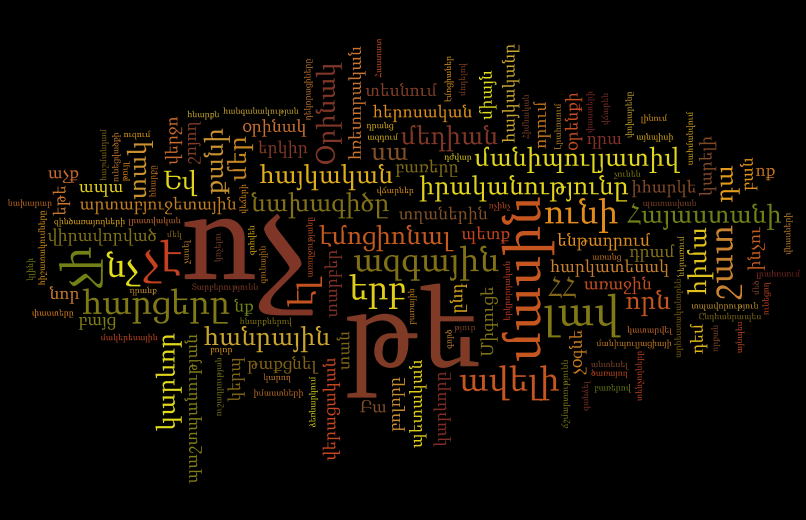 All authorities need decorations (word, color, mark, meaning), so that it will be possible to accumulate the attention of the public and turn it into power, money, prestige.

Media coverage is the basis of decorations. That, which the media is speaking about or being silent about, eventually, becomes a mass of information, where truth already becomes difficult to recognize. With semi-truth and semi-fiction conditions those who exhaust power construct their large and small decorations, which, seemingly, describe reality, as well as conceal reality.

Sometimes those decorations are eye-catching, sometimes dilapidated and primitive due to ignorance.

For example, when a question was directed to Armenia’s newly appointed Prime Minister Karen Karapetyan about how he sees Armenia’s future, he responded, “5, 10, 15 years later I see our country as Armenian.”

Of course, “Armenian” is a good and eye-catching word, no one would challenge that, but it is also a way to say something without saying anything.

The phrase “Armenian country,” for example, is full of decorative meaning, because in no way does it explain what is the purpose, which is formulated by the state. Maybe it can be assumed, that the Republic of Armenia won’t exist, since the word “country” also includes various structures (kingdom, for example). And “Armenian” is an abstract word without the legal framework, which does not impact legal consciousness, but the emotional surface.

Generally, messages expressed with words and not verbal contact, which we are witnesses of with the daily news, explain more what those with power want to hide. Of course, the media and politics are full of various manipulative tricks, but now it seems that without manipulation nothing will be done, distributed, provided.

And the primary manipulation trick is this, not to answer questions, but to give hazy and vague answers, definitely using “Armenian,” “national,” “sons,” “heroic” and other abstract and lofty words, which cannot be checked in any way and have no legal definition.

For example, when Armenia’s Defense Minister Vigen Sargsyan announced his new “national-army” idea and that idea’s “implementations of the provisions,” he avoided mentioning the state’s role in this chain. Perhaps he understood well that it is better to ignore the discredited state administrators, instead relying on local Armenians’ (and not only Armenians) emotional support to non-discredited enlisted youth in the army.

To deviate meaning towards emotions is that manipulative trick which is used most often in Armenia, consciously or unconsciously. It becomes a national decoration.

And now when the National Assembly passed the bill known under the name “1000 dram fees” after the first reading, it is possible to see how public perception is the subject of manipulation, appearing not under the bombardment of the facts, but emotions.

By law that bill allows each employed person (moreover not only Armenians but all citizens of Armenia) to be charged a monthly fee of 1000 dram for the needs of the army.

This is the full name of the law: “During the defense of the Republic of Armenia, compensation for dangers to the life or health of military personnel.” That suggests the creation of an extra-budgetary fund and the recruitment of a public fundraising model. The difference is that it is not a voluntary, but mandatory, fee.

In the newsfeed that draft law was passed in a stormy manner, since the issues were many and not shallow. This is the main question: what type of status does the collection of money have? (tax, insurance, payments, fees, donations). If it is an extra-budgetary fund, then what business does it have with the state department? And if it does, then why does it seem to be the case that until 2017 it did not do its job well?

But when those important questions appeared in the center of attention of the media, they were immediately choked with abstract, rhetorical and “national” questions: what is it, are you against the idea of the families of murdered or wounded soldiers to be able to live well? Should we not help our boys?

And it is not important at all, that, of course, no one is against a decent disability pension and the treatment of wounded youth. Moreover, they are against the youth dying and becoming disabled in a country that is not officially at war.

Emotional issues, which are at the forefront of the newsfeed, make facts become secondary. That is, the decorations are more important than the reality.

For example, when the media begins to speak about the 1000 drams not being fair, it does not open discussions about the status of the fees and what it is used for, but rather a lengthy debate is made: should everyone have to give an equal amount of money?

The priority is buried under the load of the secondary. They are spreading branches and traumatic references of who is stealing how much money, what size houses were built, how many cars they have. The media cited the accusations jewellery and possessions, and asked: but why must everyone give 1000 dram, if there is the lamination of rich and poor? The rich should pay more…

The fact is not important, what matters is its emotional impact.

It is not important that a new unforeseen tax is defined by obscure management and provided misleadingly by a parastatal, what matters is the “but shouldn’t we help our boys?” pathetic and rhetorical question, which suggests one answer: of course, let’s help.

This is how the  media’s vertical manipulation works, which helps conceal primary issues: smashing them in petty and emotional disputes.

Which, eventually leads to the case where consumers of information become accustomed to the words “Armenian,” “national,” “heroic” being artificially constructed components and concealers of meaning for those in power.