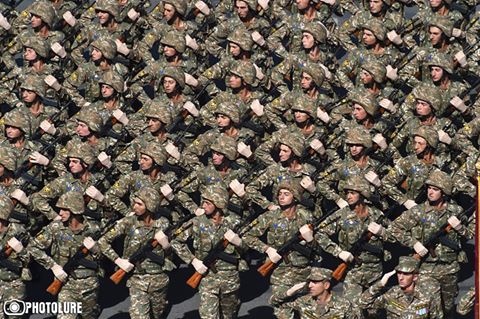 After the 1991 referendum on independence, the Armenian (hereafter free) press welcomed the prospects for the republic’s new status acquired by the will of the voters. Independence was new and promising. In the streets, in homes, and on the pages of the press was joy and newness.

The newly created Hayq newspaper on the front page of its Sept. 23 issue printed a photo with the caption “By the will of the people, Armenia is free” [below].

During those days, the actual reprinting of the decision of the Supreme Council of the Republic of Armenia was already major and recent news, which inspired pride. Independence was proclaimed, and Armenia had seceded from the Soviet Union [below].

This is how Yerekoyan Yerevan on Sept. 23 commented on the fact of independence: “Our ‘Yes’ is said. Long live free and proud Armenia!” [below].

Twenty-five years later, the Republic of Armenia is celebrating its independence with greater momentum and with considerably less enthusiasm. The demonstrative elements (mass song, dance, remarks, the promenades and fireworks in the center of the capital) occupy much greater space than our internal health.

In 1991, the main force that inspired and accumulated energy was public self-expression (by way of the right to free choice); today, it seems what inspires and unites us is the idea to be proud by physical strength. That is to say, not the delight of choice, but the reliance on military achievements.

In 2016, the appearance of large amounts of military equipment in the square of the Republic of Armenia is sublime, weighty, and impressive (weapons, in general, are sublime).

Weapons unite and simultaneously show the citizens of independent Armenia the fragile and fleeting nature of life.

An individual is small and insignificant next to a weapon — just as it is with the thunderous speeches and events for the masses organized on the occasion of Independence Day.

On Sept. 21, 1991, the vast majority of the population of the Republic of Armenia — 2 million 43 thousand people (or 94.39% of eligible voters) — said “yes” to independence. And all were masters of their own voices. Without weapons and events having special amusement status.