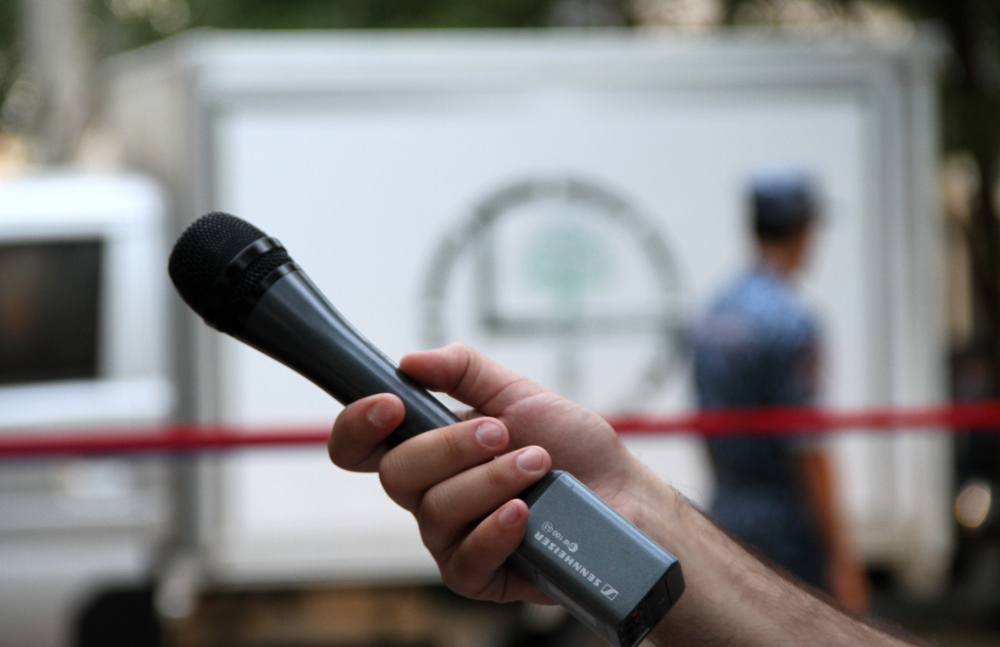 Around 30 members of the group Sasna Tsrer [“Daredevils of Sassoun” – Trans.] seized the grounds of the Yerevan Police Patrol Regiment on July 17. Today is the 11th day the group has taken over the police station in Yerevan’s Erebuni district.

Journalists have very little resources to receive official information: the base information are the thoughts expressed [AM] on July 22 during Armenian President Serzh Sargsyan’s well-known consultation, and the statements of the National Security Service (NSS) and the police. Raising questions more than giving answers.

In particular, an official explanation was never given to the question why two military helicopters on July 25 were flying over the Police Patrol Regiment building at a height of an eight-storey building? The defense ministry’s spokesperson gave no specific answer [AM] even to journalists’ questions.

The long and heavy silence of the guarantor of the Armenian Constitution — the President of Armenia — further exacerbates the atmosphere. There’s no official statement: why did the food supply to Sasna Tsrer members stop after the hostages were released?

Also not officially stated was why the agreement [AM] between Sasna Tsrer and the NSS that after the hostages were released, the group would have a “press center” and opportunity to communicate with the media was broken? Why have the negotiations stopped, on what grounds? Or how did citizen Artur Sargsyan with his personal vehicle on July 26 at 7 am pass through the police barricade and deliver food supplies to the members of Sasna Tsrer, who hadn’t received food for two days?

Added to the unanswered questions was the July 26 NSS statement that it promises to adopt “tougher measures dictated by a specific situation” [AM]. Which happened the same night.

The head of the police’s public relations and media department issued a statement [AM] much later on its Facebook page urging the public to refrain from spreading unverified information. But the unverified information is being disseminated as a result of the official statements that are incoherent and raise numerous questions. Especially when they drastically differ from the statement [AM] issued by Sasna Tsrer.

The situation, at least to date, has no intention of reaching a settlement.

Journalists are left with spontaneously trying to obtain information from the politicians, experts, artists, and doctors at Movses Khorenatsi St. — to fill the information vacuum.

In this case, playing a significant role are the live online streams of Azatutyun Radio [RFE/RL’s Armenian service – Trans.] and A1+ at the center of the events, from Khorenatsi St.

The journalists day and night are on duty on the scene, covering each unfolding event. The online, even without text screening of the area adjacent to the police station to some extent discharges the atmosphere. First, those who support the group and agree with its actions but are working and can’t be on Khorenatsi St. from the morning are able to follow events online, to not become further tense from being uninformed — what’s happening at this moment, next to the police station, until 8 pm, after which they can personally participate in the rally?

Those who don’t welcome the group’s actions, are not preparing to go to Khorenatsi St., nevertheless, from sporting interest, are able to follow events online.

Those who want to be on Khorenatsi St., but for whatever reasons can’t, are able to follow the events online — as they say, from the couch.

In this state of emergency, doing extremely valuable and grateful work would be state agencies, especially the Armenian president’s press office, justice ministry, the police and NSS press offices, organizing online, open, and visible work. In this case, journalists would try to acquire information not through personal contacts but would have the opportunity to immediately direct questions to the relevant officials and get answers. In that case, then the admonitions not to publish unverified information wouldn’t be appropriate.