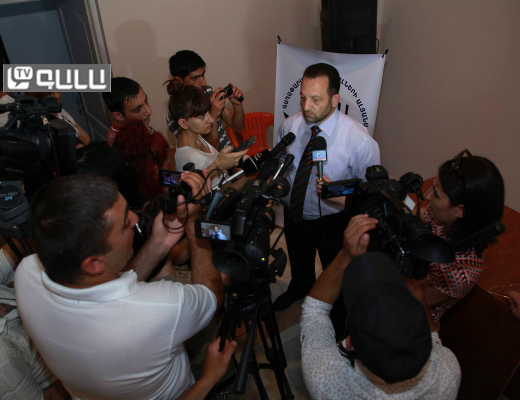 The news of a new political party — the Alliance of Like-Minded Liberals (“GALA” in Armenian) — established by employees of Gyumri’s GALA TV was announced at the party’s convention on July 1. The party plans to participate first in Gyumri’s local elections and then in the parliamentary elections in 2017. GALA TV owner, entrepreneur Vahan Khachatryan was elected as the board chair.

According to GALA TV’s official website [AM], founded in 2005, the TV station adopted an important principle: “to be independent, objective, follow the rules of the television industry, which are not to mislead its colleagues and viewers, and deliver only high-quality programs and unbiased, objective journalism.”

In Armenia’s media history, this is actually the first such precedent. We’ve had cases where journalists became political and party figures. For instance, before his political activity, Rule of Law party leader Artur Baghdasaryan [AM] worked as a reporter for Avant-garde daily newspaper.

TV reporter Sergo Yeritsyan became a member of the Rule of Law party (though, it seems, he doesn’t consider this move the brightest page of his history, as there is no mention of his party membership in his official biography [AM]).

We also have the opposite example, when an official alongside his party and political work takes his first tentative steps toward the field of journalism. Former education and science minister Armen Ashotyan ahead of the 2015 referendum on constitutional amendments began hosting the Yerankyuni talk show on Armenia’s Public TV.

The TV company’s staff becoming a political party automatically rules out GALA news outlet’s function: to provide impartial, unbiased journalism to TV viewers. And not on the grounds that the journalists’ professionalism is in doubt. Not at all. Simply that the stamp of being a political party already implies bias, for instance, in terms of reporting on the GALA  political party’s activities. And this is already contrary to the principle of impartiality.

This sentence out loud, it’s true, is very sad to hear. But the Armenian media sector (newspapers, television, websites) are also politicized: they serve the interests of specific political and economic entities — only that they bear the stamp “independent news outlet” on their forehead. In this sense, perhaps GALA’s decision is more honest?

GALA going from a media outlet to a political party points to another trend. According to one of the party’s founding members, Armenuhi Vardanyan, the decision to establish the party was adopted with much difficulty: they discussed at length whether there’s a need to go the route of political activity. Ultimately, they concluded that this is the only right way [AM] to address problems.

“Gyumri, despite being anti-government, has no one to serve its interests, including in parliament. I’m not underestimating the work of any MP, but  in the course of our journalism work, we’ve come across many cases when we wanted to raise an issue having to do with Gyumri in the parliament through the MPs representing Gyumri, but those MPs have demonstrated an absent position.”

A media outlet is conventionally considered a structure with power: it’s the fourth from the authorities. The constitution grants everyone the right to free speech, but journalists have an additional advantage: to circulate their speech. Are Gyumri’s issues not raised in Armenia’s parliament? What about the journalists? The very core of their work, in this case, is to raise Gyumri residents’ issues, the specific, addressed targeting.

GALA’s becoming a political party signals that journalism is engaged merely in serving itself and unable to serve the public’s interests: identify the problems and follow up, monitor the process of their being solved?

And only politics is the direct route…?

There is an old sophistic saying: the rider cannot get off the horse; otherwise, he is no longer a rider. So what about a media outlet..?