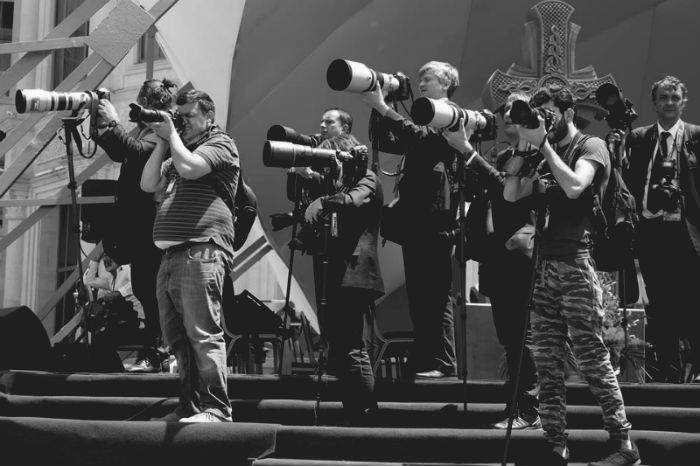 During the Pope’s visit in Armenia, my colleague from Azatutyun [RFE/RL’s Armenian service], who has a sense of humor, was posting photos on Facebook: one of the airplane in the distance, another of Vardanants Square in Gyumri, and one from even further — Khor Virap, and so on. And these photos were accompanied with captions such as “We continue to cover the Pope’s visit VERY closely.”

The A1+ reporter simply wrote [AM]: “The eyes of a local Armenian journalist accredited to cover [Pope] Francis’s visit won’t tell that they saw the Pope personally. The Pope’s contact with mortals in Armenia was restricted in every way.”

More precisely, personal photographers and camera operators had the sole permission to be always present at almost all the public events in which the Pope participated.

Meanwhile, reporters not accredited by the Ministry of Foreign Affairs, who, as per procedure, since May 16 had submitted an application to cover the Pope’s visit had presented a scan of a piece of ID, a photo, and a letter of reference signed and stamped by the chief editor or head of the media outlet…

In the end, most of them followed the Pope’s visit through television broadcasts. And as testified by accredited journalists, the need to show the accreditation badge came barely once or twice.

A few days before the June 24 visit, the guidelines to covering the Pope’s visit to Armenia was published, from which it becomes clear:

(a) At the welcoming ceremony at Zvartnots International Airport: “ONLY  personal photographers and camera operators can enter the area” and be present.

(b) At the meeting of Catholicos of All Armenians Karekin II and the Pope at the Etchmiadzin Cathedral: “Only PERSONAL camera operators and photographers will be permitted at the video and photo shoots”.

(c) At the welcoming ceremony at the Armenian president’s palace: “Only personal photographers and videographers can work at the Presidential Palace.”

(d) At the meeting with Armenian Church delegations: “Coverage restricted to personal photographers and camera operators ONLY.”

(e) Visit to Khor Virap: “There will be NO opportunity to take photos and videos on site.”

It’s still good that apart from the “personals,” other photographers and camera operators were permitted to shoot for 20 minutes in groups and then leave, to make room for the other group.

As for what newspaper, online media, and radio reporters were to do, at a press conference on the morning of June 24, foreign minister spokesperson Tigran Balayan gave some friendly advice: “Writer journalists today have to sit in front of the TV.”

It was repeatedly stressed that everything will be broadcast, which was true. But, in fact, audiences and TV viewers saw a mediated and not so living image and sound provided by almost one source. It was also said that the other camera operators won’t be able to move around — only the official broadcasters will get the best shots.

Perhaps the invited party had imposed these restrictions. I’ve heard that the Pope’s security is stricter than in the case of even many presidents. However, despite this, the Pope rebuked bodyguards who didn’t let believers approach him, or despite their protests, offered a blessing to a child trying to touch him.

Definitely, this discrimination between “personal” and other media outlets and moreover, between print and broadcast media wasn’t a compulsion, but predominantly their own initiative. And the main evidence of this is that this discrimination had already been demonstrated at the press conference heralding news of the Pope’s visit called by RA President’s Chief of Staff Vigen Sargsyan and other organizer officials — “writer journalists” hadn’t been invited.