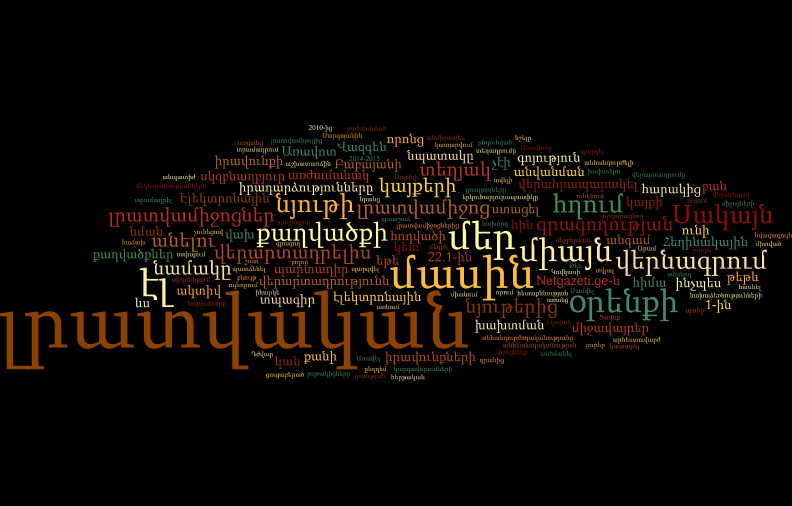 On April 1, Aravot and another media outlet received the same letter. The author of the letter said they represented the online Georgian-language media outlet Netgazeti.ge, which has been around since 2010. “We report on events that happen in not only Georgia, but also the countries of the South Caucasus. Unfortunately, we’ve discovered that our two correspondents who provided articles and news from Yerevan and Baku committed plagiarism. An internal investigation revealed that more than 40 articles provided in the years 2014–2015 were the result of plagiarism.

“The reason we’re writing to you is that these journalists copied information, comments, and references also from  your media outlet and without providing the necessary attribution.

“We are sincerely sorry and apologize. We also want to inform you that these reports have already been removed from our site.”

But let me say again: we received the letter on April 1. The events that began the following day forced us to temporarily forget about this brilliant demonstration of professionalism.

But I had occasion to remember it very soon after. Just one example: on May 30, a few sites republished Samvel Babayan’s letter to Vazgen Sargsyan, which Babayan’s advocate had at one time provided to Aravot — they republished the clarification connected to which Vazgen Sargsyan’s brother, Aram Sargsyan, had provided to Aravot. There was no link in the headline of the republished story, an active link was at the very end, and our news story was published in its entirety. In other words, all the provisions of Article 22.1 of the Law on Copyright and Related Rights (on the conditions of the use of news items) were violated.

Recall, according to this amendment to the law adopted on October 2013, republishing extracts of news articles is “permitted only to the extent justified by the purpose of quotations” and

The law also established penalities for violating these provisions: “If Article 22.1 of this law is breached, compensation for damage is one-hundred to two-hundred fold the minimum salary.”

But, except for Hetq.am, no other media outlet could be bothered or had the time or tenaciousness to go to court for the violation of these requirements. And now the fault is entirely ours that after the law was adopted, plagiarizing sites that temporarily displayed a cautious approach, after experiencing a “light fear,” have now returned to their old ways.

Though why only them?

Even websites considered professional and influential overlook the requirement to name the source in the headline and don’t adhere even to the requirements to give proper attribution. Certainly, such conduct and remaining unpunished inspire the old plagiarists even more.

I know that my colleagues are currently preparing the next series of initiatives against parasitic sites that subsist on news stolen from other news sites. It’s very good, of course, and we traditionally join every such step that aims to improve the health of the media industry.

But the previous experience compels us to doubt that this time too our intolerance for plagiarists will last several months.

And one more thing. It’s unlikely that Netgazeti.ge would’ve known about our adjustments to the Law on Copyright and Related Rights.  It’s just that there are media outlets and media environments for whom plagiarism is shameful and intolerable, and there are media outlets for whom it’s a “way of life” and media environments where the fight against plagiarism is of a regular “demonstrative” nature.