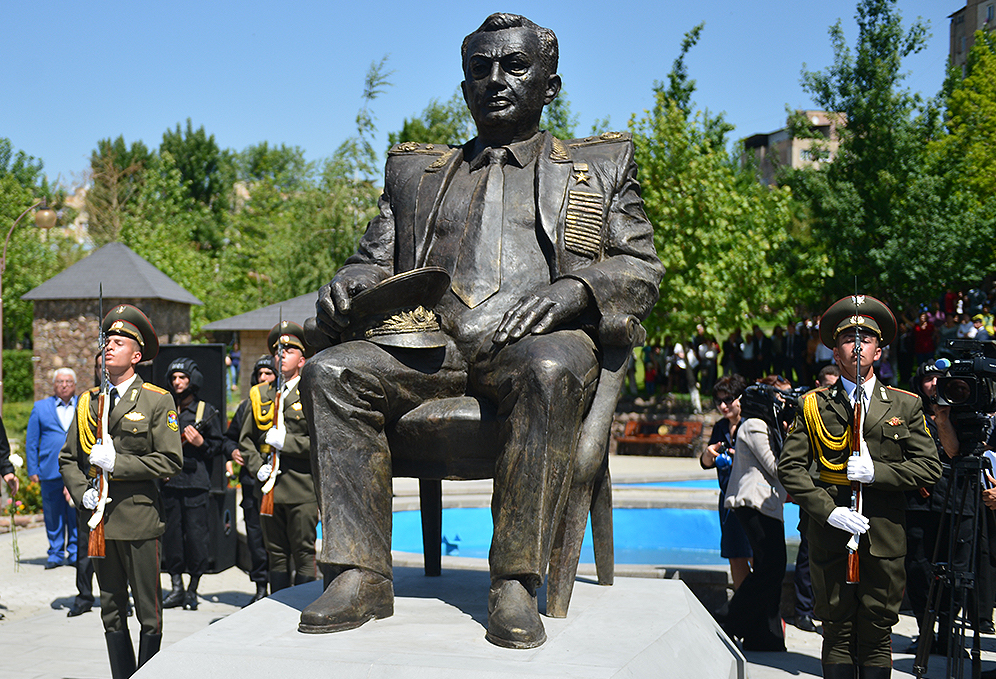 Monumental figurative art always flourishes with a state commission, which by way of large statues and monuments attempts to demonstrate and preach why it aspires and how it sees the future. That is, it erects something akin to guidelines.

It is mandatory for the work to be very big, steadfast and heavy. And as a result of its weight, to be guided by pathetic commentary and ecstatic remarks.

Actually, this same monumental role is played by media outlets that are partly or wholly (also openly or covertly) funded by the state budget. A media that has assumed such a “monumental” role tries to explain what it wants to voice and what to absentmindedly crown not to the public, but to the state.

Propaganda occurs in both cases. State officials through statues and news stories disseminate their preferences, ideas, and tastes.

Statues are no longer viewed from the perspective of art and urban development suitability, and journalists are not perceived as individual units having their own point of view. Both fulfill one role: they speak on the ruling authorities’ behalf and in many cases, with the words the ruling authorities want.

The difference perhaps are the overtones: the amount of bronze, or the volume of words “cast in bronze.” In short, whoever puts more bronze in the voice, the more assiduous they will be considered.

The role of the “monumental statues” of the media sector in our days is given over to television. That monumentality becomes pronounced when you watch several TV stations’ reports on the same subject.

A good and recent example was the unveiling of Marshal Hamazasp Babadzhanian’s statue. By moving a little ahead, it can be claimed that the same style and signature will be applied also tomorrow when Garegin Nzhdeh’s huge statue will be unveiled (perhaps also the amount of media “bronze” will increase, since, after all, Nzhdeh is greater and more heavy-weight than Babajanyan).

Noticeable in all the television reports is the verbal assault that is accompanied by an exaggeration of meanings (in some cases, with the loss of meanings, which is unavoidable in the case of extreme exaggeration) and passionate accentuation.

Contexts are intermingled: the army of the Republic of Armenia is identified with the USSR army; it is pathetically declared that our army today is in victory since in the past the Soviet army was in victory. In general, praise for the Soviet is given with greater devotion by TV reporters who haven’t lived in the Soviet period than those who have.

Public TV of Armenia begins to describe the statue with references. A venerable woman says Hamazasp Babadzhanian did many things for our common home, for the Soviet Union. The journalist develops this thought without seeing the split (that home is long gone, and so it means we’re homeless).

“Babadzhanian’s statue will adorn the park,” says the Kentron TV reporter and, in accordance with the best Soviet traditions, adds that the statue “was given breath and spirit thanks to detailed and delicate work.” The words line up easily, and it doesn’t matter that many don’t carry meaning, becoming beautiful and empty covers.

It’s noticeable that the journalists talk about the idea behind the statue relying exclusively on the opinions of the creators of the work. For instance, the sculptor says that he pictured Babadzhanian sitting, since the image of a victorious man is expressed more vividly this way. And the journalist repeats the same words without modification or doubt. She says, he’s sitting because he’s victorious.

The journalist is not a person who has an opinion, but one who lavishes words. The state broadcaster’s reporter, for example, says, “The people of Avan are confident that the marshal’s statue is properly imposing and in its place.”

AR TV’s reportage is so happy and pathetic that you inadvertently want to watch it with pauses so you don’t faint from bliss. The journalist says, “In constructing the marshal’s statue, the sculptor tried to emphasize particularly his patriotism.” And she adds at the end: “The statue will adorn the park and become a unique symbol of patriotism for the population of Avan administrative district.” You want to ask, why only the district of Avan, perhaps also of Nor Nork…?

Or, how much does the word “adorn” befit patriotism? As the masters of outstanding Soviet vocabulary would say, love for the homeland needs no adornment. Tanks, perhaps, but adornment, no. In films they would say, is it the suit that should adorn?

Watching such reportages of course is a happy task, but in many cases also disheartening.

Armenia TV suggests perceiving the marshal of Soviet troops as a fairytale hero. The reporter constructs the report from the perspective of a young girl, for whom the statue is a miracle, and the senior military officer with a gun — a fairytale hero, whose coming she is eagerly waiting for. The reporter says, aha, the white sheet [covering the statue] will be pulled off and the fairytale marshal will appear. Naturally, this is said with selfless pathos, with which not even the Soviet school of journalism and ideology can compete.

This is a sample of kitsch journalism. Two opposing platforms are joined: innocent childhood and the hero with a gun. The gun is no longer lethal, but a fairytale. It’s not a past, but a dreamed about future.

Also said in this reportage is that the girl herself is a “small marshal.” And why not? In this concentration of pathos, everything can be said.

Even if the audience is not told that Babadzhanian suppressed a liberation struggle in Budapest in 1956 and returned Hungary to Soviet control (as a result of which thousands of people died, were jailed, and left the country), that doesn’t mean the audience doesn’t know this.

The audience knows and hearing about the “small marshal,” it sees no connection between the truth and this “monumental” journalism.

All the TV stations were connecting the marshal’s statue with the Karabakh-Azerbaijan April War, which required irrational courage from the journalists. The soldiers fighting in Artsakh became the Soviet army marshal’s progeny, and with that, automatically becoming equal to the soldiers of former Soviet countries who, being of a different ethnic origin (Uzbek, Tajik, Azerbaijani), can say the same thing.

Let’s take a moment to take a breath and think.

And finally, why is a statue erected for this unit on the eve of the anniversary of Armenia’s independence?