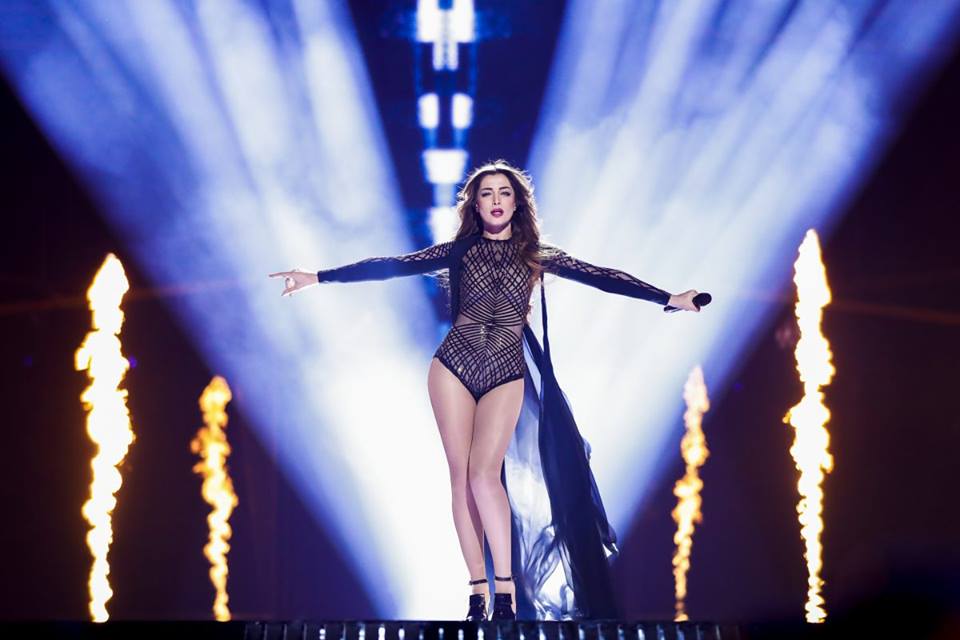 Almost everyone in Armenia watches the Eurovision Song Contest, a television production that draws the largest audience. Perhaps only the national football team’s matches can compete with this live broadcast in terms of audience size — and not always.

The attention toward this year’s Eurovision in Armenia was particularly great, since we had a beautiful and brave delegate. Iveta Mukuchyan was a revelation for many: she knew how to not only how to sing, but also how to speak and keep herself dignified, which was evident during press conferences.

This singer with an alluring appearance and bold stage outfit gave emotional and confident performances in public venues, as a result of which she acquired a large number of fans in Armenia. And that perhaps is the most difficult, since Armenians both Eurovision itself and the Armenian representatives are criticized most by fellow Armenians.

And when during the semi-finals Mukuchyan waved the Karabakh flag and then explained her actions, it was perceived almost as a feat (likewise beautiful).

The European Broadcasting Union officially warned the Public TV of Armenia that if the Karabakh flag is again waved during the contest, sanctions will be applied. It’s possible that Armenia’s delegation will be threatened with disqualification in successive years. As a result of the alleged sanctions, the Karabakh flag wasn’t seen in the finals, but instead, a plane with the words KarabaghLoveIveta trailing behind it was seen flying above Stockholm.

In the end, Mukuchyan occupied 7th place in the contest and returned to Armenia with significant bonuses. They liked her (sexual magnetism and a smart posture are an infallible combination).

Eurovision, which has quite an undermined reputation, indeed, was good this year. And I’m not talking at all about the songs or singers: song quality and taste often evoke bewilderment, and the singers, a theater troupe gathered from various planets and ages.

What was interesting were the political aspirations, which this year overtly came to the fore.

Of course, Eurovision has long been perceived as a glittery and crowded platform for political actions of various calibers. The rationale of live broadcasts impels taking advantage of this opportunity. And though contest officials constantly remind, warn, and urge contestants and delegations to refrain from political statements, with that, they encourage more the desire to draw political parallels.

The biggest political action this year was by the official Eurovision contest itself, which divided the most important phase of the contest, the voting, into two parts: by the professional jury and the audience. This was done for the purpose of keeping the contest intrigue till the last moment, since in previous years, the obvious leaders became known halfway through the voting, which then made further viewing boring.

This year the intrigue was maintained till the last moment, thanks to which the jury vote often not only differed from, but also contradicted the people’s vote.

The national juries became the mirror to the official political course, and the distribution of their points was likened to, in diplomatic language, a note of protest, since many gave points in spite of the music and for lofty politics. And they didn’t even hide it.

No points were exchanged also between Armenia and Azerbaijan. Moreover, the word “Azerbaijan” was not heard once on the Armenian Public TV’s airwaves. The Armenian TV host demonstratively evaded giving the country’s name and in no way presented the singer representing Azerbaijan. Azerbaijan’s postcard was accompanied by silence on Armenian airwaves. And the commentator was very proud of this and of himself.

Russia’s commentators during the live broadcast not once mentioned the name of the Ukrainian song. Singer Jamala, which won this year’s contest, had chosen a song with a radical connotation: she mourned the violent deportations and murders of Crimea’s Tatars, carried out under Stalin’s orders. The song, which was called “1944,” was performed with great emotional tension and passion, becoming something like a political manifesto, which brought and flung the mass deportations and deaths on the European stage.

Russian TV hosts presenting the song only said that it’s about the fate of the singer’s relatives.

Political conformism seeped into all of Eurovision’s holes. Russia is now trying to rewrite Stalin’s image and accepts any criticism of him with bayonets, since there’s a desire not to remember the victims, but to display its own power. And Stalin’s image is equivalent to this political course.

In Ukraine, it’s not equivalent, which is why a completely different political message is sent to Europe, which Europe very quickly appropriates.

Germany’s jury gave the most points to Israel’s song, which perhaps was the most failed. There’s the impression that the Holocaust and the burden of guilt has again become activated. Armenia’s jury considered France’s song the best, giving very few points to Russia and no points to Ukraine. Meanwhile, with the public voting, Russia and Ukraine received the most votes from Armenia.

This blended and odd voting conveyed dramatic elements to the process of the TV show. Ultimately, any manipulation is a guarantee for victory for one and a danger of falling for the illusion for another.

Last year Armenia didn’t obtain victory with a song related to the genocide, since those connections and hints were so weak, invisible, and full of compromises, which were neither a hint nor a meaning (especially when the word “baby” appeared in the song). But the Ukrainian delegation acted smarter: it put Crimea and violence on the same platform and modernized today’s war. Or rather, it was permitted to do so.

Modernization always implies a counterattack. And if Mukuchyan has good possibilities of becoming a public face in Armenia (it’s expected that she will now give many interviews and often appear on television), well difficult times await Jamala.

War happens not only on the battlefield, but also in the media space. There are hysterical moods in both Ukraine and Russia. And the media arena is full of gross violations of journalism ethics. You can watch this excerpt [RU] and be astonished at the sort of petty issues this Russian media outlet with its million-strong audience is occupied with.

The political course decides everything. It’s been said that it can be, so they do it.

We, for example, are advised to still wait. Also perhaps not to give names.