Bus Explosion in Yerevan: Television Can Still Compete with the Internet 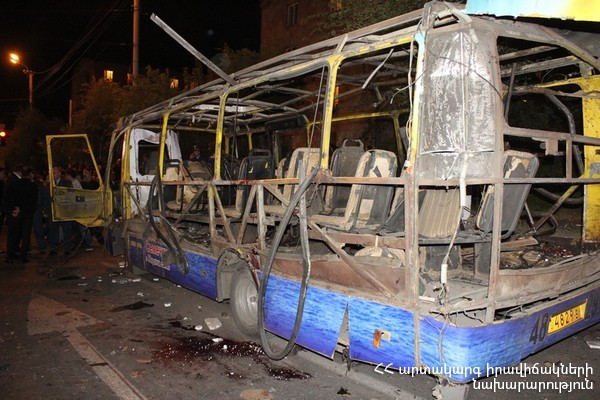 Social media users were the first to report on the explosion of the number 63 bus (make: Bogdan) on Halabyan Street in Yerevan on the eve of April 25. Then, moving to the news websites, news of the blast became official. It was confirmed by the Ministry of Emergency Situations.

Television stations (Yerkir Media, Shant TV, Armenia TV, and the Public TV of Armenia) began to work in emergency mode. These TV channels covered the Halabyan blast so quickly and comprehensively that even those in my circle of friends who don’t watch TV confessed they turned on the TV during that time, to get the details of the bus explosion.

This was a case where only news sites and social media weren’t enough, and the work of television was very important for informing people.

Yerkir Media’s and Armenia TV’s news broadcasts were constantly on air. They had reporters at the scene of the explosion, on Halabyan St. and Armenia State Medical Center where the victims of the blast had been taken.

Shant TV wasn’t always on air, but in its news broadcasts it reported the latest news as much as possible, as well as working with witnesses on the scene and reporting additional details with their help.

Television is team work, and the journalists of these TV stations proved this with their work.

Yerkir Media very quickly prepared a column about the blast, regularly broadcasting fragments without comment, and summarizing each broadcast with information available at the time — about possible causes, the health condition of the victims, and so on.

Armenia TV was able to have new details or a new guest on air (for example, Yerevan Municipality Transportation Department chief Henrik Navasardyan, who confirmed that the bus was in good order and ran on diesel) each time it tuned in.

Host of “Zham” news Artak Herikyan’s work was exemplary for TV journalists: in the process he was jotting notes with pen on paper and after each interview and each live connection with a journalist, he would summarize succinctly and clearly the information received for TV viewers.

Halabyan is a street that is close to a few TV stations. Shant TV and Armenia TV took advantage of being close to the scene.

The other two TV channels located close to Halabyan St. — h2 [the state broadcaster’s second TV channel] and Kentron TV — decided not to offer breaking news and to report the news of the Yerevan bus explosion that killed 2 and injured 7 people the following day.