A TV Show That Mocks the Media 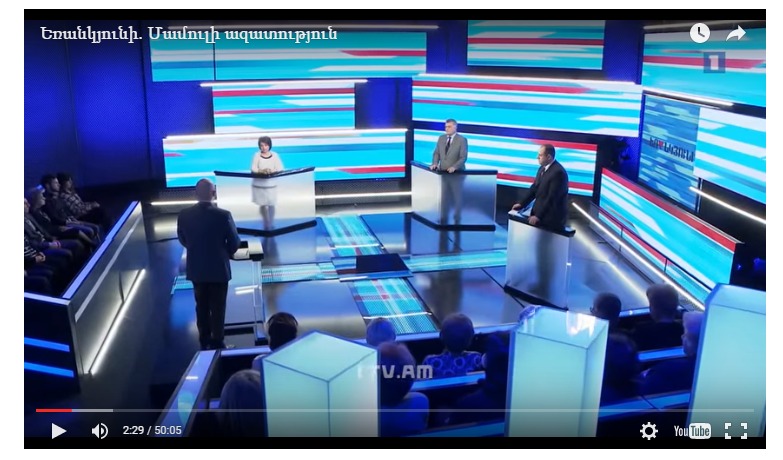 Broadcast on Public TV of Armenia, the talk show Yerankyuni (“The Triangle”) is presented as a news-analysis program. And said at the start of every episode is that the discussed topics have no limits, and that the three participants will debate on important public issues.

This show very often becomes an occasion for discussion, though it’s difficult to watch, since the dose of balance and trust is significantly altered.

The cornerstone and charm of Yerankyuni is host Armen Ashotyan (Republican Party of Armenia vice-chair and the former minister of education and science), who decidedly is a master of magnifying, extinguishing, crushing, and inflating different topics. And perhaps it’s this gift of his that attracts the audience’s interest.

Yerankyuni‘s March 11 episode was dedicated to press freedom and, as the host said, media “responsibility, professional ethics, and scandals.”

Of course, now, not only the lazy criticize the media and journalists, especially since the definition of a journalist has expanded and blurred quite a bit, and in many cases, journalists find themselves the target of different state agencies — as entities that undermine state stability and publish unwanted information. But Ashotyan isn’t lazy, and he touched on this topic with comprehensive manipulative tricks.

Let us mention a few tricks, not at all with the intention to belittle the role of manipulation in current politics. When one of the most famous faces of the ruling party hosts a debate-style talk show, it’s politics — it can’t be journalism or acting (in its original and contradictory sense, to enter into someone else’s body and to forget your own).

In order to successfully direct shows having several invited guests, the following is important:

1. The choice of guests. Manipulation is based on the ratio of viewpoints (i.e. people). An illusion is created that there are as many opinions as there are people.

But, in reality, the ratio of opinions is always inclined toward the side that’s favorable to the ruling authorities. Yerankyuni has three guests: one always opposing the official view, while the other two (plus the host) might differ on minor issues or nuances, but by and large are united and unanimously toe the line.

And when during the last episode, they spoke and complained about the biased press and the need to regulate the media sector, three people (a representative of Ararat TV, a TV station perceived as sympathetic to HHK; an MP who’s been a member of various political parties; and he, Armen Ashotyan) remarked that the media is not regulated and, based on state interests, some control should be established. Only one person had an opposing opinion (Aravot.am’s chief editor).

That is, the videos are rolling, the conversation is proceeding, so it seems it’s a heated debate. But always it’s done to a controlled extent, with a controlled subject matter and people.

2. A manipulative trick is to constantly talk in general, from above, and anonymously, and ignore the specific. Of course this is done for the wellbeing of the homeland.

When regulating the freedom of online media was discussed, someone opined that that was censorship. Ararat TV’s representative said it’s unacceptable for a warring country, for example, to report news of someone who died at the border without verifying the victim’s name. An attempt was made to remind the others that the Republic of Armenia is not officially at war and a state of emergency hasn’t been declared. But the balance of forces was already altered and the three participants of the show were talking about army and security interests.

It became emotional, while censorship was justified (in any case, for some time), since the journalists were presented under the guise of being anti-state.

3. When the debate veers in an unwanted direction, the practice of splitting and deferring the issue is put into action.

Armen Ashotyan is a protagonist (in the language of theater, a prime actor, who also manages the choir of opinions). He has a good command of the situation: he’s able to crush, postpone, and finally, pulverize the issue. By the way, it’s not enough only to say, “We’ll talk about that. Later. Definitely,” but also produce arguments about why later.

4. The incomparable is compared. For example, green and square.

When the time came to discuss A1+ TV, which was deprived of broadcasting (a case that seriously damaged Armenia’s reputation and is considered a serious precedent for restricting freedom of expression), Ashotyan confidently said he sees nothing extraordinary, since A1+ is now on air. And so, it’s in the game, and everything’s ok.

Of course everything’s not ok, since the independent channel having 15 minutes of airtime a day has neither a broadcasting license nor the reputation it once had.

Not only the host, but also two of the guests agreed that internet broadcasting is equivalent to terrestrial broadcasting.

5. The concentration of emotions. In the more daring version, the populist style.

This is what happened during the discussion on the media: Ashotyan said that “the press has lost a significant vote of public confidence” and is also engaged in spreading lies. One of the guests (guess who) tried to counter that there’s a lack of confidence in all sectors, and it’s certainly not the fault of journalists. An example was cited of MPs’ inappropriate behavior toward journalists — specific names were mentioned.

Ashotyan replied that MPs are no longer afraid (in a good way) from journalists. And so, journalists have no authority. “In the past, I too was very afraid of journalists, but now, no.”

One of the guests added that there’s malice and venom in the press.

6. The use of irony, sneering and sometimes also undisguised ridicule.

Sneering is the most powerful manipulative tool. It seems to say I heard you, but we stay quiet about a lot of things and understand each other. In the case of Yerankyuni, it’s not only the seasoning, but also the main dish.

Sneering symbolizes both distance and meaning. The host genuinely doesn’t care about the topic. By and large, already few are those media outlets that can work independently and dictate the topics on the agenda. Ashotyan uses that very well, reproaching a weakened media (with a sneer, of course) for its weakness and lack of trust.

Aravot.am’s chief editor said that television is governed from one center. She compared the situation with a puppet theater, where the marionettes’ strings are either pulled or slightly loosened.

Ashotyan quickly directed the question (with a sneer, of course) to the Ararat TV representative: do you agree that there are displays of puppetry? And it was under this hypnosis of a sneer that the speaker said that there are no banned topics on Ararat TV and generally speaking, everything’s ok in the TV sector.

This is one of those instances when sneering already rules out a serious (or at least a little nervous) response. A question asked with a sneer gets only a response with a sneer.