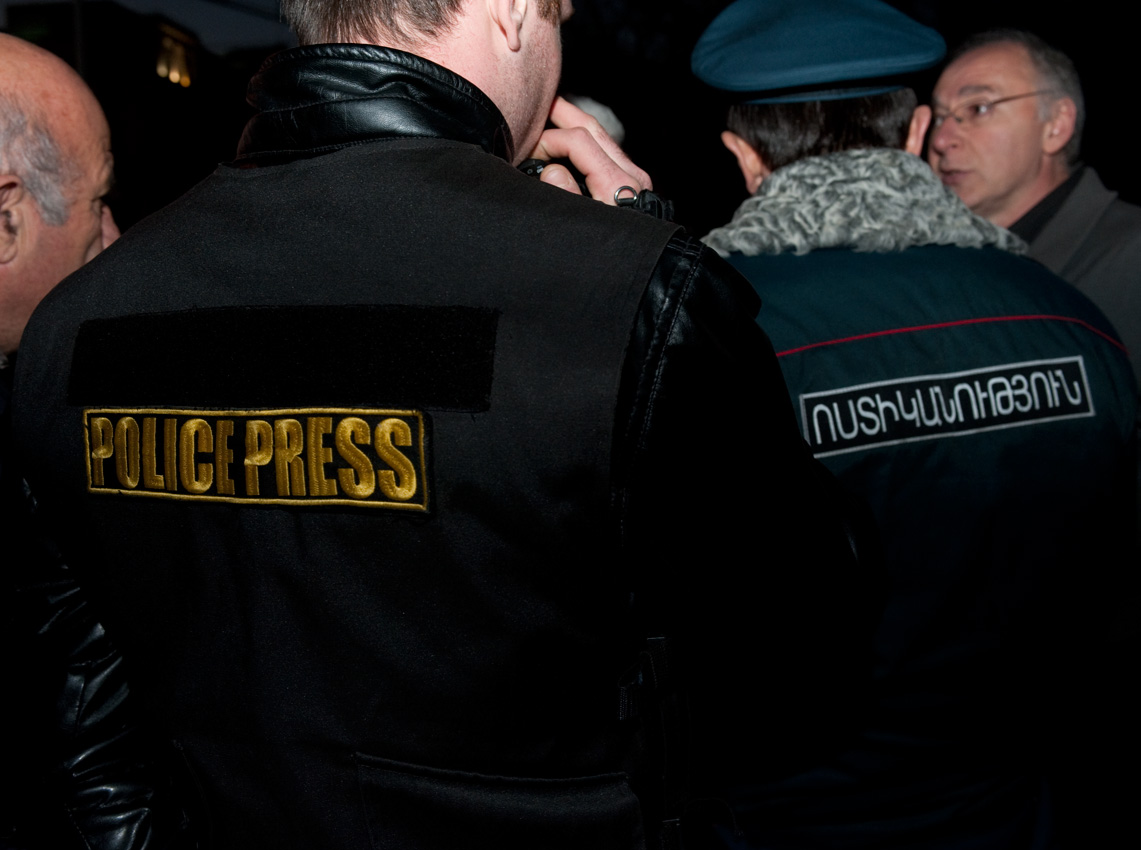 It’s the latest innovation of the Armenian police force: While photographing the opposition march on March 1, I discovered around me a few people “armed” with video cameras on whose backs were adorned the words “Police Press.” One doesn’t need to be very wise to discern that they were employees of the police’s public relations and media department, known to the public as “02”.

This department, which was established many years ago to ensure a connection with journalists and the public (read: to engage in the PR of the internal affairs ministry, and then the police), has begun to “produce” journalists. This novelty is worrying for young press photographers who will be forced to work side-by-side with police reporters. Working in the same “field,” in my opinion, they have to work abiding by the same rights and laws. Photojournalists carry out their entire professional activities according to the Law on Mass Media and the ethics of photojournalism. I won’t speak of ethics — everyone choses their own rules of conduct.

It’s incomprehensible: within the scope of which law do police officers who sport press symbols work? I asked my colleagues this question.

“Let’s try to consider what the police is doing by making a comparison. It’s the same thing as a journalist working under some extreme conditions to wear a police uniform, take a baton, and go to do their journalism work, and if anyone obstructs their activities, they’ll hit them with the baton. Even if the person obstructing is a police officer, they’ll hit that officer too, put them in handcuffs, and say, you’re obstructing my professional activities and take the obstructor to the police station.

“That is, the situation is already reaching absurd heights: anyone, officials from different state agencies can put themselves in a journalist’s place and fulfill that function. [Armenian education minister] Armen Ashotyan did the same thing: one day he up and decided to host a TV program series. Ignored were all the calls that a government representative, the vice-chair of the ruling party has no right to host this show because it’s a conflict of interest. He can’t be impartial, which we saw during each episode. When an opposition figure would say something, he, as a prominent Republican figure, would counter. The same with the police.

“If someone is both the police and press, this is absurd for the simple reason that this person, as a rule, is performing operative actions, conducting operative filming. And if they counter that they’re 02’s correspondents, in that case, let them be kind, write that they’re 02’s reporters, write only ‘Press’ and not Police Press. These two things cannot be combined, since the conflict of interest is obvious. If they’re trying to look professional, well in this case, it’s professional ethical norms that are being violated.

“A law is being broken, since they have to protect the order. And if it’s a rally or demonstration, then also create favorable conditions for journalists’ activities, not replace journalists with themselves. Unfortunately, this trend is developing, and everything began with HHK [Republican Party of Armenia] vice-chair Armen Ashotyan. Maybe it was around before as well, but the case with Ashotyan was extremely cynical.

“Moreover, there have been hundreds of cases of obstructing journalists’ lawful professional activities, [but] no one has been held accountable. Now if the work of a police reporter or police camera operator is obstructed, definitely someone will be held liable, but not as an obstructor of journalist’s activity, but as an obstructor of a police officer’s activity, and criminal proceedings will be launched for interfering with a police officer’s actions.” 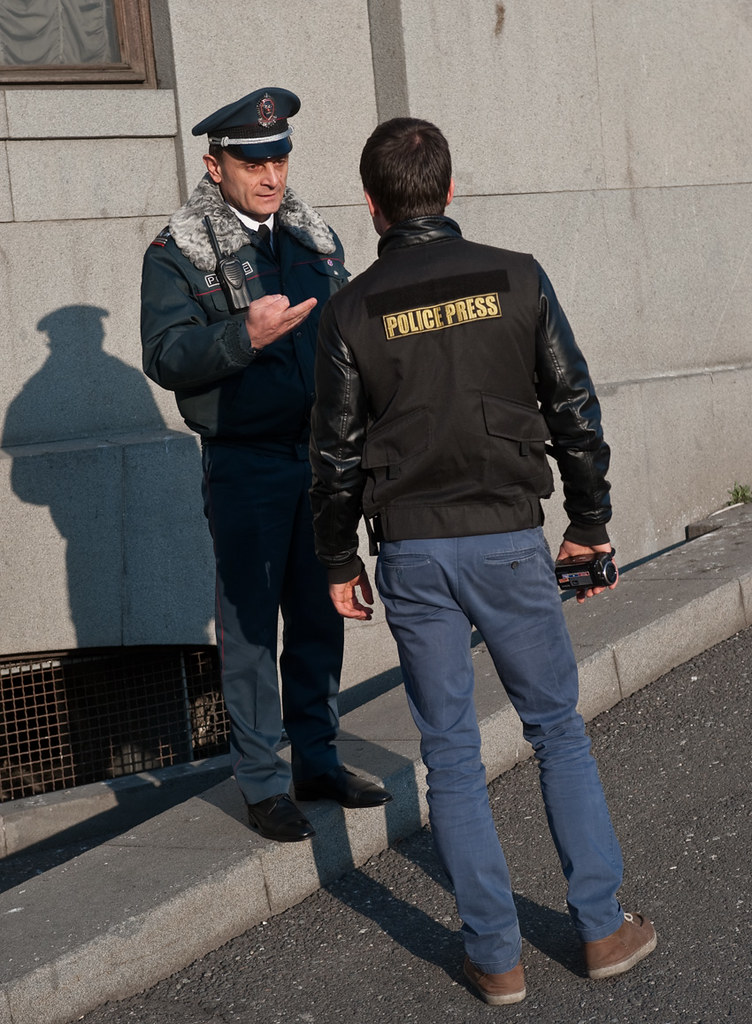 “The term ‘Police Press’ suggests to me that the police has created a mass media, the authority of which is quite dubious for me. This term doesn’t represent the media and public relations department; it directly states that existing and operating is a police news outlet or a mass media working within the police system, the legal grounds for which it would be quite interesting to know.

“Basically, the police doesn’t need to establish a news outlet to oversee a situation in a public area for whatever reason and through technical means (in this case, with recording equipment): it can record or videotape with the appropriate equipment and professionals — without creating a news outlet.

“Why the need to give them jackets with this specific inscription and mislead not only citizens, but also other media representatives? What would interfere with their work if they bore not this inscription, but another, say, ‘Police video surveillance’ or something similar? If they start to explain that such things exist in this or that country, the problem won’t be justified.

“If these employees from the police are for reporting on their, police work, in that case, another question arises: does the government have a need and a right to establish a media outlet in its system for covering its work?

“Regardless of this commentary or opinion, it’s necessary that the police explain the meaning of these inscriptions.”

“If the person with the video camera is wearing a police uniform, he is first and foremost a police officer. And only. In France, during special operations, people in civilian clothing wear a red armband with ‘Police’ written on it so that people around them know whom they’re dealing with. Naturally, a police officer has privileges. He can arrest, detain, use force — within the limits of the law. Attaching ‘Police Press’ on him, a police officer can carry out operations filming — videotaping, say, protestors for police (read: punitive) needs.

“By the way, those people don’t work professionally as neither police officers nor camera operators. Let me cite an example: they prohibited us from shooting the disarmament of the ‘terrorist group’ in [the Yerevan administrative district of] Nork. They had completely cordoned off the area, explaining that we journalists might carelessly photograph their operations team members’ faces. Only the police officers were filming. Those same people whom we’re talking about. But the operations team members’ faces were seen on all the TV channels. And they didn’t allow us to take photos for that reason.”

“It’s no secret that in the search for the best shot, we’re forced to both push each other and ‘turn our backs’ on colleagues by tucking into someone’s shot. This has also happened to me: my colleagues have appeared in my shot. Sometimes it’s reached the point of an altercation. And the buck stopped there. After shooting, we went to drink beer together and the incident was forgotten — we’ve remained friends and colleagues since.

“But what will happen if I ‘tuck’ into a police officer’s shot with my back? What will happen if he gets in the way, and I lightly shove him to get him out of my shot? Where’s the guarantee that they won’t detain me, arrest me, and take me to the police station for resisting the police or ‘insulting a representative of the state’?”