Journalists in Emergency Situations: Maybe Without Helmets But Reporting Accurately 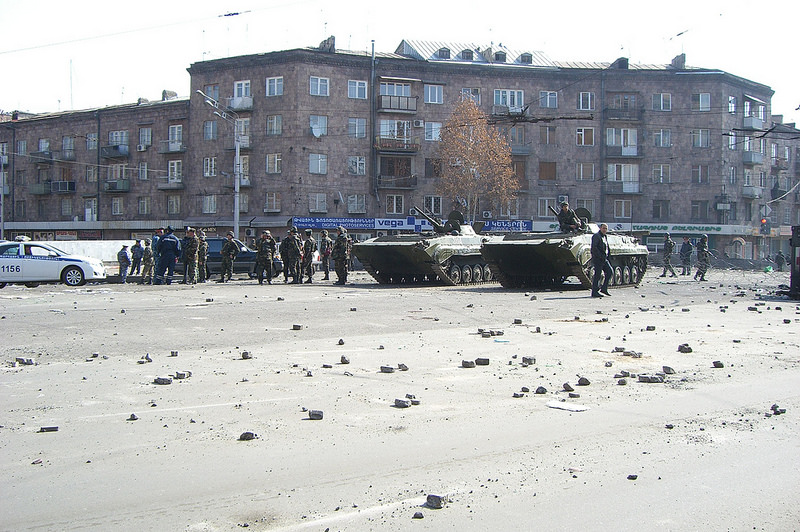 Outside of the ordinary everyday that has given rise to complaints of “nothing happens in Armenia,” there have been emergency situations, the coverage of which, nevertheless, requires some journalistic training.

The most acute of the domestic clashes and the only one that resulted in human casualties was March 1, 2008.

What lessons did these events give us journalists?

I’m not talking about when the ruling authorities declare a state of emergency by the force of law and the unbearable burden of restricting free speech is placed on the media’s shoulders.

This time let’s bypass also coverage of catastrophes, tragedies, and tense voting, though, ultimately, the same professional requirements operate in such cases.

Here we’re talking about those situations when the tension within society has become so aggravated that the future clash is clearly evident.

Who should be sent to the scene?

Definitely not the inexperienced journalist, who live on air might allow not only professional stalemates, but also humanly unacceptable phrases and mistakes. (Even if they aren’t going to report anything live on air, in the day’s stream of strenuous, dense news requiring immediate release, their mistake may go unnoticed, not corrected, and thus disseminated.)

Definitely not they who has more of an itch to become a hero than a professional responsibility.

Definitely not they who has a habit of lying, distorting, exaggerating even a little and a proclivity to invent.

This turned out to be a list of who not to send to a heated scene.

In any case, what should a journalist do if they’ve been sent to the “explosive” center to cover the development of events?

Record the development of events, pressing the “pause” button on the filming or audio-recording device as little as possible.

If possible, speak to all parties, respecting the dignity of everyone without exception.

Publish only what you’ve seen with your own eyes.

What not to do?

No personal commentary, no assumptions, no assessments.

Do not relay any threats or insults parties have hurled at each other.

Neither publish nor circulate any calls for violence or threats — not even a hint. And in general, any calls to take any action. In extreme cases, describe that there were these and these calls.

Do not become a participant, do not join the cries or any action those at the scene do thatmakes you a participant. Carry no insignia, identifying mark or item that is likewise from the “attributes” of the parties. Don’t take sides either on the scene or especially later, in the story.

Don’t aggravate the situation with your behavior or spoken words.

Rule out publishing any news heard from anonymous or unknown sources and not thoroughly checked. (No news from the oft-recurring “sources next to this person,” “based on our information,” and other such vague sources.)

In tense situations, there are people who claim to be witnesses and give testimonies to journalists. Their stories cannot be transmitted if they don’t want their face to appear, or their name or other identifying information to be noted. The same goes for calls to the newsroom by anonymous or unknown people.

Hysterical screams, calls for help, profanities of a sexual nature, and other sensory transfers inflaming the audience should not be abused on those days. Of course, they are among the journalistic tools that accurately describe the atmosphere, but they should be kept to a minimum as much as possible.

Only record or help?

No journalist in the world has the answer to this question. As a journalist, your first duty is to record; as a moral being, to help, when only you can help someone at that moment.

When the time comes when doing both simultaneously is impossible, your subconscious will decide and pave the way to either the purely humane or professional conscience. Whichever one it points to, there’s no reason for self-flagellation — both are extremely important.

If you say you have to go to the scene with a helmet, they’ll laugh at you. But it’s worth having any item of protective clothing or outfit when going to a heated scene. Self-defense advice wouldn’t hurt, and (self-defense) training would also be desirable.

Large bags, especially women’s, in which cosmetics and toiletries have their honorable place, are contraindicated at the scene of an emergency. Generally refraining from bags, and clothing with large pockets are strongly preferred.

High heels are not convenient for everyday journalism, but in the case of emergency situations, you definitely have to kiss them goodbye, at least temporarily until everything calms down.