President’s Extensive Interview: This Was the Urgent News 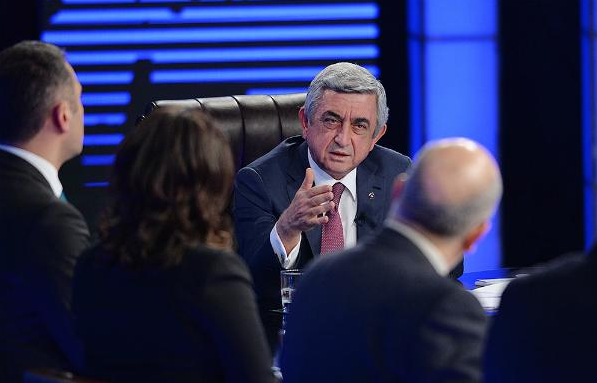 Suspicions arise that there’s a problem of censorship, even if all among those gathered were representatives of “reliable” news outlets

Yesterday evening several news outlets reported that Armenian President Serzh Sargsyan on the evening of December 2 gave an extensive interview to representatives of local TV stations, and spoke of the constitutional changes and recently special operations carried out in the capital.

If there hadn’t been the official statement from the Office of the President’s Department of Public Relations and Mass Media, news outlets not in attendance perhaps wouldn’t have had this information and wouldn’t have reported it. Though for professional journalism, this was not at all news: it was a news detail.

Becoming customary in the case of the Armenian president’s press conferences and interviews is first, the official statement.

Sometimes, in line with the same custom, the official transcript of the question-and-answer session is released first. While any important thought voiced by the president is not published. And if it is suddenly published, no matter how astonishing it is, it can be viewed not as a professional journalistic approach, but as something akin to a leak, to treachery.

And those in attendance?

What happens in such instances in the world of professional news outlets? Particularly if the president or his spokesperson don’t have the habit of providing regular briefings or other types of meetings with journalists? The so-called ink not yet tried on the interview, not yet having touched the video footage, trying to get ahead of the pack, they very quickly, urgently, at breakneck speed disseminate at the very least the most important thought, the most interesting opinion, the most unforeseen intent that the official voiced at the meeting.

Even the silence on this topic on the morning of the following day breached again only the same half-news — the president gave an extensive interview on these topics.

How is it that the participating TV stations’ professional patience doesn’t burst? In such cases, it should gnaw at news outlets: the impatience of broadcasting the story I’m not talking hours but minutes before.

Otherwise, suspicions arise that there’s a problem of censorship, even if all among those gathered were representatives of “reliable” news outlets. Suspicions going even further emerge: are we going to watch video footage edited in the same place but slightly different from each other?

Judging by the photos released by the same official source, there are many respected (in terms of professionalism) faces among the “representatives of TV stations” who also have their media platforms. It’s understandable, what big battle there is in their souls. The same battle of professional impatience, that after an important interview not even a single line of real news was conveyed. Their professionalism at least should’ve been spared.

Otherwise, the information that the president gave an extensive interview is absolutely not news. At best, it’s a moderation — a broadcaster’s opening remarks. Though a professional moderator would never begin the reference to an interview with an official with the news that the official gave an interview.

P.S. This article was ready when the extensive transcript [AM] of the interview appeared on the president’s official website. It too is an official statement, and it ultimately preceded professional news media references on TV channels. Professionals too, it seems, weren’t spared.