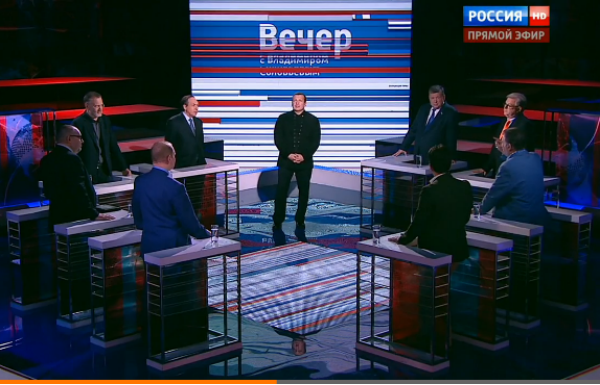 Once again, our life is shaped by that fatal trifecta: Armenia-Turkey-Russia

We grew up with the Armenian-Turkish issue as a part of our life. Early on in life we knew that a heinous crime has occurred, and we were taught that the Russians are our friends and they saved us. Then we realize that we made a mistake somewhere, after which we discover that our sworn friend, the brotherly Russian people, acted improperly toward us.

For years, the cognizant segment of the Armenian people on April 24 pleaded from television one word, even a syllable about us. Vremya TV was silent. Brutally silent. Then in an instant of freedom of speech, Russian news granted us the requisite two lines. By then, we had another catastrophe and the gesture didn’t bring us joy.

On November 26, Channel One Russia’s Vremya Pokazhet (“Time Will Tell”) talk show was devoted to Russian-Turkish relations. One of the guests, who wasn’t a well-known figure but an amateur political scientist, with great gusto said that in a hundred years, Turkey has not apologized to the Armenians, so why should it apologize to Russia for a warplane?

That the Turks committed a sin before the Armenian people, Russian TV channels recalled after a Russian warplane was shot down. Besides recalling, Russian channels issued a message to Armenia not to forget this tragic fact. They, presumably, are unaware that it’s the only catastrophe that even if they wanted to, Armenians would be unable to forget.

But Russian media outlets’ consistent reminders and attempt to draw Armenia into Russian-Turkish relations are not accepted unequivocally by Armenian viewers. For a simple reason: Armenians during the Soviet era for decades dreamt that the Russian Empire’s media outlets on some occasion would remember or notice them, their issues and tragedies.

One of the most coveted moments for Soviet Armenians was any slight, indirect, from afar mention of an Armenian name, topic, or issue. The associations of this cherished moment remain till today. And hearing any mention of them during Russian political programs, an unenlightened Armenian viewer till today initially experiences a dangerous feeling of satisfied pride.

Depending on knowledge and level of awareness, and from capacity for dignity emanating from this, Armenian TV viewers can be dived into several groups: 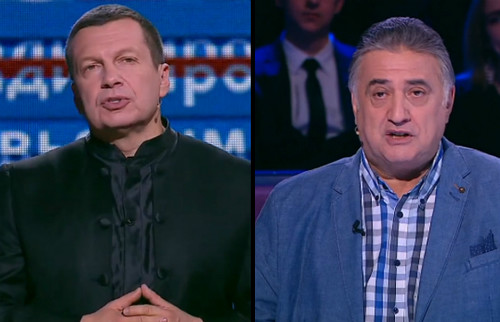 Russia-1’s Vecher S Vladimirom Solov’yevym (“Sunday Night with Vladimir Solovyov”), one of the most watched political talk shows, during the last two episodes, particularly in the two-part Nov. 26 episode, a few times mentioned Armenia, involving Armenians in the Syrian conflict, and the Karabakh issue.

During the program, Solovyov, continuing Director of the Center for the Middle East and Central Asian Studies Semyon Bagdasarov’s train of thought on the lack of desire to help the Russians, says, “We have to create our coalition… I think, Armenians will gladly participate.” To which Bagdasarov responds: “Armenians are obliged to participate; 2.7% of the Syrian population is Armenian — what, Armenia can’t send a brigade, a group of advisors there?”

In response to which Solovyov continues: “When the Grey Wolves squeeze into Karabakh, they were met with such a counter attack that they quickly fled.” Solovyov praises Armenian soldiers’ strength, will, courage and says such an unheard sentence that a Soviet Armenian would’ve given part of his life to hear. Solovyov says: “The map of Greater Armenia preserved in Rome would force many countries to heave a great sigh and ponder.” This glorification can actually titillate a segment of the Armenian viewership. But for an informed and cognizant audience, the course of this praise is understandable.

During the same episode, Bagdasarov propounds the Karabakh issue and says: “Syria provided military aid during the Karabakh War. Fighting there were Syrian pilots — not ethnic Armenians living in Syria, but Syrians.”

At that moment, one of the guests interrupts, saying that Armenia has the Karabakh issue to deal with and shouldn’t be drawn into this conflict, to which Bagdasarov, an ethnic Armenian, responds, extremely angry: “If someone has helped you, you are obliged to help, not sit securely and say, ‘I have a Karabakh issue’ and stop trouble-making.”

Once again, our life is shaped by that fatal trifecta: Armenia-Turkey-Russia.

A response is needed, but there is no response because there is no political, diplomatic potential that will find the only proper conduct and response. The Armenian side is silent.

Updated on 2015/12/02: The headline and one word in the text (“trifecta”) were updated to reflect a more accurate translation.