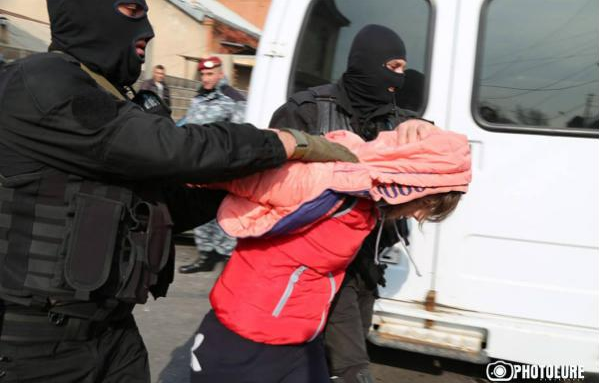 News spread at lightning speed accompanied by many unanswered questions that an armed suspected criminal group was found in a Yerevan house, neutralized, and detained.

The news was first conveyed by the photographer notoriously known for always covering and always being familiar with the work of Armenia’s security forces, who wrote [AM] on his website that National Security Service (NSS) and RA Police employees “neutralized 10 citizens armed to the teeth: A large quantity of arms and ammunition were found”. The story also mentioned a “grave and great crime”.

The news was soon substantiated by the NNS, which stated [AM] that “the criminal group pursued an aim to organize a series of grave crimes in the territory of the Republic of Armenia”.

In the first report it was written: “According to the photojournalist’s information, those who were neutralized planned to carry out terrorist activities in the capital” (see screenshot below). 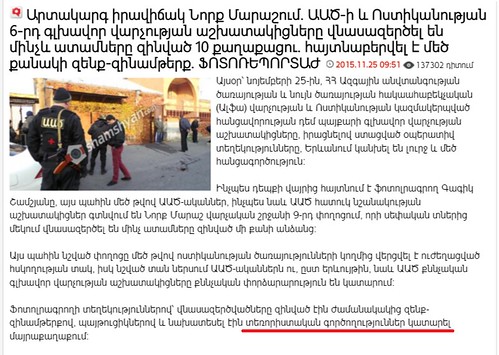 Then 1in.am announced [AM], “The terrorist gang found in Yerevan had a connection with one of the opposition forces,” adding there were diasporan Armenians in the group, as well as three women. 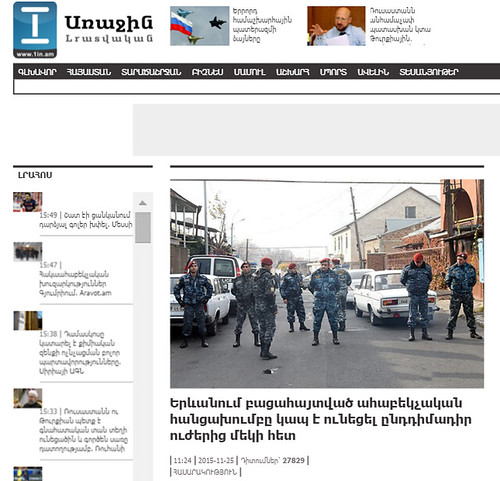 The claim that the group was planning “terrorist activities” 168.am turned into a headline [AM]. 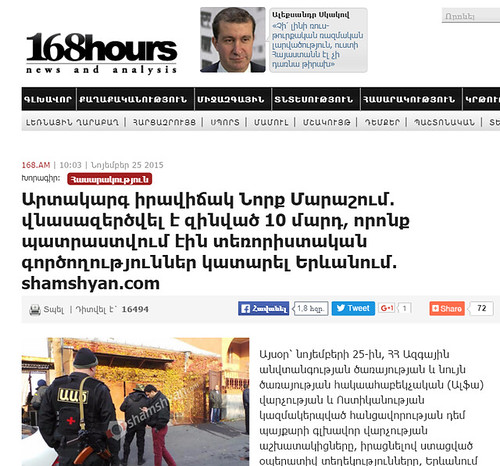 This breaking news story essentially required both background and development, since it was completely unknown who actually was “neutralized” and why. And what terrorist activities are we talking about (international or domestic)?

Uncertainty breeds panic which further deepens when people begin to talk and become worried while reading news about “terrorists in Armenia” and anticipating.

For an audience experiencing shock, the local media demonstrated gross negligence. The breaking (emergency) news was shaped in emergency fasion. There were media reports [AM] that the detainees were not mere foreigners but Syrians, “but they knew Armenian.”

Amid the tension of warring Syria and especially Russian-Turkish relations, Armenia’s NSS operation sounded like an invitation — to propound various shady theories and create a terrorizing atmosphere.

It’s worth also recalling Russian President Vladimir Putin’s statement after Turkey shot down a Russian warplane. “We received a stab in the back from accomplices of terrorism,” he said.

And inadvertently, Armenia was placed in the international context, since “terrorism” is the most common and horror-spreading word in the international media. This word is simultaneously associated with Syria, Turkey, Paris, Russia, and now Armenia. In other words, so our attention doesn’t wane and that we remain alert.

Especially since almost all of the major local Armenian news sites over the course of the entire day on the ground freely disseminated the photos of the detainees taken from inside the house to the detention center.

Basically, the National Security Service allowed this — establishing the framework of vigilance and alarm along with the media.