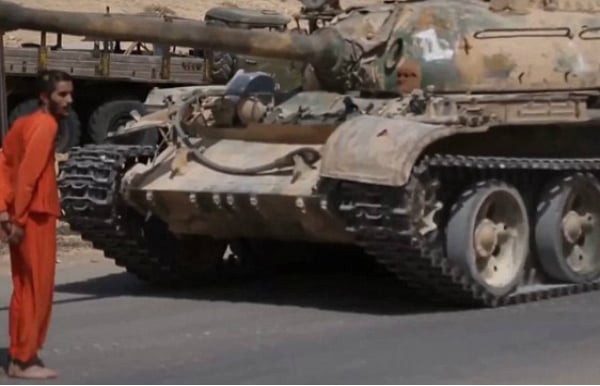 Local Armenian news site Tert.am reposted an ISIS video with the headline “ISIS Executes Syrian Soldier by Throwing Him Under a Tank (video 18+).”

The video depicts a tank driving over a 19-year-old boy dressed in an orange outfit, his flattened out body shown in a close-up shot; the broken, bloody bones; the unrecognizable face or rather, its remains, with the brain scattered.

Also absent was a description or warning about possible brutal images. It only read: “The Syrian hostage depicted in the video wears the orange coveralls that have become customaryof ISIS executions. The execution takes place in the city of Homs.”

This Tert.am story received a lot of attention in social media. Many Facebook users criticized it, after which Tert.am removed the video.

News outlets every day struggle not to cede their positions in the sector, not to fail; every day they are confronted with a dilemma, making decisions on whether to publish a controversial photo or video or not. And based on editorial ethics, policies, and taste, they adopt those decisions.

According to the position of some foreign news outlets , journalism must present the facts, even if they’re unpleasant or vicious. The media shouldn’t filter what happens or turn a blind eye to reality because the more people who see the reality, the more likely it will be to change it.

They believe that these videos should be presented without editing, in their raw state, mentioning in the headline what readers or viewers can expect. The argument is that the audience is smart enough that it can independently decide to read, watch, change the channel, or close the page.

But psychologists say that’s not always the case. According to them, the likelihood that a person will avoid watching a violent scene if it’s presented to him is practically zero. The more shocking and brutal, the more views and dissemination it will get. In addition, such scenes incite similar brutality and aggression.

Among media professionals, such discussions are endless: they happen every time something shocking happens — a beheading by ISIS militants or another murder takes place, say, live on television (ex. the journalists murdered in Virginia). And every time the news outlet once again decides how it should cover the event.

This time even tabloids like the Mirror Online and Daily Mail Online, which had used terms such as “monsters” and “another sick method of execution” in their headlines, didn’t publish the video of the tank running over the 19-year-old in its entirety. They edited the video — omitting the brutal scenes and close-up shots.

Because in the internet age people have the option of choice, if they want, they can find all the horrifying ISIS murder videos themselves and watch them. In this, they don’t need the news media.

By publishing the ISIS murder videos, the media becomes a tool in the hands of ISIS, a piece of propaganda, spreading the dread and horror that ISIS aims to sow. Publishing these types of videos of terrorist organizations gives them what they want: notoriety, media coverage, and a platform to get their message across.

After James Foley’s murder by ISIS militants, The New York Times ran on its front page Foley’s photo with the terrorist’s knife pressed against his throat. A photo of Foley’s severed head wouldn’t have conveyed anything more than the helpless condition of the journalist on his knees in front of the executioner.

Just as the image of the 19-year-old captive in an orange outfit standing before a tank, his hands and feet tied, completely conveys the full horror and tragedy of what happened, close-up images of a dismembered body are not necessary to feel it.