Is it So Horrible When a Journalist is Also a Demonstrator? 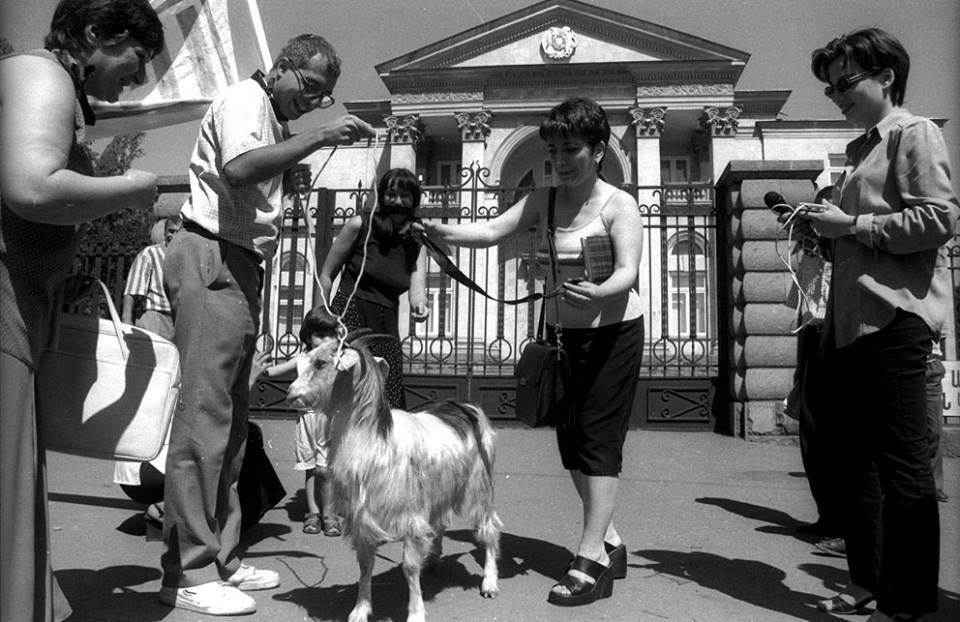 In recent days, tied to the events of January 23 on Yerevan’s Baghramyan Avenue, becoming a topic of discussion again was the unanswered question of whether a journalist becoming a demonstrator is ethically sound.

That was the day when Photolure agency photographer Hayk Badalyan was forcibly detained and RFE/RL Armenian service (Azatutyun) reporter Hovhannes Shoghikyan defended his colleague: “He’s a journalist, a journalist; leave [him]” (watch from 07:15 in the video). Someone off camera is heard saying “A journalist doesn’t shout from the back…” followed by cursing.

Another detainee, GALA TV journalist Paylak Fahradyan, was indignant [AM] that Committee to Protect Freedom of Expression President Ashot Meliqyan at a discussion on the violation of the rights of journalists and news outlets said that some journalists had informed him [AM] that on Baghramyan Avenue on June 23 Fahradyan had acted like a demonstrator.

We won’t talk about whether Hayk Badalyan shouted the swear words attributed to him or whether Paylak Fahradyan acted like a demonstrator or not.

We just want to recall that there have been numerous cases in Armenia when journalists have become also demonstrators. Individual journalists have said that during a given incident they haven’t been able not to act as members of the general public and staged a protest simply as a group of journalists. Twice a protest was staged even at the National Assembly — by accredited reporters. But these were one-off demonstrations.

There was one time when journalists acted as demonstrators for days. In the summer of 1999, when criminal accusations were made against Nikol Pashinyan, then chief editor of Oragir, journalists in September held demonstrations for days outside the presidential palace. One day, they staged a silent demonstration with their mouths taped shut, while another day they brought a goat, since Pashinyan was accused also of calling the Compulsory Enforcement officer “kazyol” (literally “goat” in Russian, though in offensive slang).

By the way, at the time a demonstration immediately outside the presidential palace was permitted. To be more precise, permitted were journalists — but not the goat, on the grounds that “it doesn’t look nice.” “What do you mean?” said Vasak Darbinyan, insulted. “Why, look at what pretty eyes she has.” Police officers initially allowed it but eventually detained even the goat at the Arabkir police division. “Why, she was just staging a peaceful demonstration,” said A1+ reporter Viktoria Abrahamyan, upset. “Excuse me, but are you going to imprison our kazyol or eat her?” Liza Chagharyan inquired of the police officers. “Just don’t hit [her],” ordered Vasak Darbinyan. It was this expression that offended the law protectors the most: “So we are kazyol beaters?” they asked.

This has all been published [AM] already. What hasn’t been published is that after the initial demonstration with their mouths taped shut, journalists had entered negotiations with the country’s leader, Robert Kocharian. To be more precise, this is how the incident occurred: After the initial demonstration, a RFE/RL Armenian service (Azatutyun) reporter called presidential spokesperson Vahe Gabrielyan for comments. And he said that Kocharian was prepared to meet with the demonstrators. The reporter said but they hadn’t asked to meet with him. Gabrielyan, surprised, asked then why were demonstrating in front of the presidential palace? The demonstration was over for that day, and we were forced to gather the demonstrators again — and, by the way, coming to the negotiations were journalists who hadn’t even participated in the demonstration.

That Azatutyun reporter wasn’t allowed to cover the demonstration — he handed over his recording to another journalist who wrote the news story. And coming to the next demonstration was a different journalist, who had been instructed beforehand: “Don’t tape your mouth shut; don’t go to negotiate with the president.”

The rest, including myself, were two-in-one: both journalist and demonstrator. I myself published a reportage on that protest.

Now the leaders of media organizations accept that a journalist has the right to act as a general member of the public, but as soon as he does, he stops being a journalist. I understand that they’re right and that this indeed is a violation of ethics. But let me also say but I see nothing horrible if indeed, say, witnessing an act of violence, a journalist gives in to his nerves and shouts something or tries to defend someone. In that case, really the right thing to do is pass on the story to another colleague in the newsroom.