Sometimes a Journalist’s Best Uniform is an Invisible Cloak 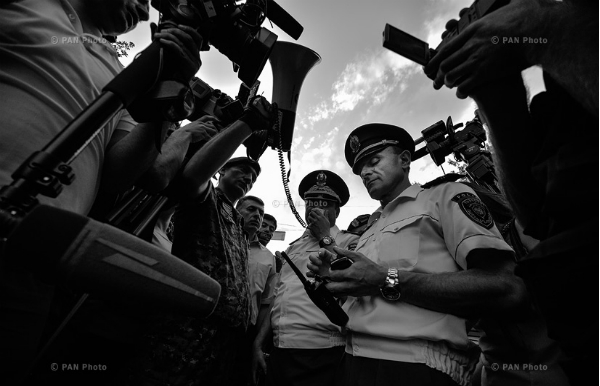 The June 23 brutal dispersal of the sit-in, the obstruction of journalists’ professional activities and the use of physical force against them provided an opportunity to ponder the peaceful coexistence of journalists and police.

Presumably, there are certain rules for coexistence to be peaceful; otherwise, the right to use physical force will continue to dominate the right to create visual or text-based work.

And since the last fight remains the attack, the beating, the use of arms and special equipment, journalists must try to counteract by finding adequate protective measures. Of course, I’m not talking about journalistic truncheons or armor; rather, the irrevocable trust that coverage of and publicizing the incident is just as important as the incident itself.

There is now a situation [AM] in Armenia where per 100,000 residents, there are about 1,000 police officers (compare with 256 in the US; 298 in Germany; 197 in Japan; and 285 in Russia). Such an increase in number doesn’t remain unnoticed or inconsequential. Police officers, considered the implicit defenders of public order, can allow themselves to defend order in a way that is on the offensive.

In addition, to decide how a journalist’s role and external appearance and where his place should be during different police operations.

A discussion [AM] on the work of media representatives covering mass events took place in February, during which “arming” journalists with insignia and identical uniforms was proposed.

Police employees said that “it would be desirable for journalists to wear special vests, which would make them identifiable to law enforcers.” According to the police, a journalist uniform would shield journalists from unwanted incidents.

What happened at the #ElectricYerevan demonstrations and rallies proves that in many cases the ID card a journalist carries not only doesn’t protect him from unwanted incidents, but also on the contrary, propels them. That is, it’s made it easy to identify him. And naturally, identical uniforms will make journalists even more vulnerable if police decide to “neutralize” them first.

One of the arguments by the police is that they find it difficult to separate participants of a demonstration from those covering it, which is why they want to be sure that they are using force not against an ordinary citizen but a journalist.

The Law on Freedom of Assembly [AM] stipulates the right to freely cover rallies, emphasizing that journalists are not rally participants. Also not participants are “persons who are at the place of the rally for the purpose of carrying out creative activities.” These persons probably could also be considered the media workers researching and looking for creative inspiration.

The police not only shouldn’t obstruct their work (to video record, photograph, audio record, simply speak with demonstrators, and gather opinions), but also is obliged to support them and ensure their safety, protecting them from any attacks.

Meanwhile police officers (including plainclothes officers and those without insignia) on several occasions on June 23 prohibited journalists from recording video, including using physical force and detaining them without any explanation.

In fact, a journalist never stops being a journalist, even if he’s outside of work hours (if, of course, he doesn’t suffer from split personality disorder). And seeing a remarkable incident at any time of the day, he doesn’t say I’m no longer a journalist, or I’m simply a passer-by or member of the public. The gathering of information, after all, might come in handy later. Especially since during demonstrations and rallies, needed information comes from multiple sources and is intended for long-term use.

A journalist declares that he’s a journalist with his badge. That is, he carries out the same function as a police officer: he ensures public harmony.

Sometimes it seems that in Armenia, everything is done to make the job of the police easier (but not transparent). The police proposed accrediting journalists during mass events, which surprised many people.

How can the police provide accreditation for an event for which it is not the organizer?

At #ElectricYerevan, law enforcement suggested media representatives leave the human chain area and station themselves in a specially preserved area that is safe. Naturally, those asserting the standards for safety should have been police officers.

This move is not only an attempt at control, but also in direct contradiction to the nature of a journalist’s work, since it is the journalist and only the journalist who is the measure of perspective and vision.

And if he needs to be invisible and protect the information he uncovered, then that’s how he shall act.

Sometimes during the course of work a journalist’s best uniform is to be unseen, since to arrest attention also implies becoming targeted.

Let’s not forget that the culprit or provocateur in order to disguise himself might intentionally wear the alleged journalist uniform (even if only the vest), and in that case the police officer won’t have the means to conduct an external and cursory check of the individual’s authenticity.

Returning to the topic of uniforms, I can say that the uniform proposed by the police will have to be of different types: everyday casual and festive. As well as seasonal (at least summer and winter uniforms). And, after all, we shouldn’t forget about shoes (also seasonal). Dress codes too have their rules.

We all understand that if police officers have received orders to assault and interfere with journalists, regardless of what document or clothing you have, you will be beaten and your work will be confiscated. And so the matter of peaceful coexistence requires work on both sides. And mutual respect.