When a Serious Crime Becomes a Case of Tragedy 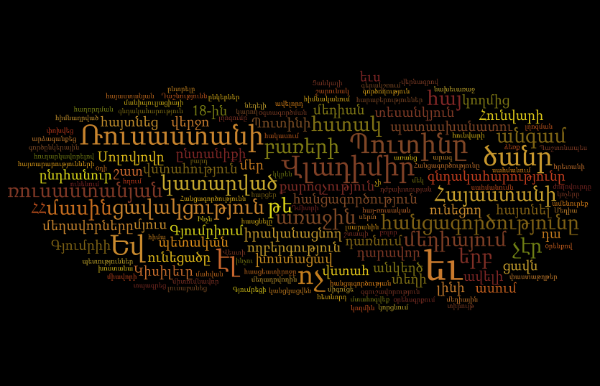 News of the January 12 shooting of the Avetisyan family in Gyumri was absent in Russian nationally significant and state media for several days. One week later, there was an allusion to Russian President Vladimir Putin’s response and the situation changed.

It was officially announced [RU] that Putin had a phone conversation with Armenian President Serzh Sargsyan and “once again extended his condolences to the relatives of the victims of the Gyumri tragedy and the entire people of Armenia.” It remained unclear from this news when Russian president first expressed his condolences and, after all, what the cause of the death of seven people was (perhaps the tsunami?).

Armenian-Russian relations on the public level are now contradictory. On one hand is caution; on the other, anger. And many questions. The public is expecting at least decent explanations and not Russia’s arrogant imperial statements.

The Russian media (mainly television) covered the murder in Gyumri in a manner and using terms from which arrogance poured openly.

I’m talking above all about the intentional blurring of words, terms, and concepts. The first sign of media manipulation is replacing a precise term with an emotional word — which happens in responsible Russian media. And then that same “blurring” is circulated by responsible Armenian media.

For instance, when the word “crime” turns into “tragedy” (or “massacre”),  it immediately loses a clear recipient (the suspects, those carrying out the investigation, those imposing penalties) and acquires an abstract, emotional, and even cosmic meaning.

Crime is defined in the criminal code, while tragedy is not. Tragedy is a point of view, while crime is an act.

On January 18, Kremlin mouthpiece Dmitry Kiselev talked [RU] about the Gyumri murder in his program Vesti Nedeli (1:26–1:29). “I think, the general misfortune should unite our peoples more closely… Gyumri’s nightmare is our common pain,” he said.

If instead of “misfortune” and “nightmare” he said “the shooting and causing life-threatening injuries with a sharp object” the picture would’ve been clearer, and there wouldn’t be a need for unnecessary words.

Kiselev wouldn’t rush to present the accused of a serious crime as a descendant of one of the many sects of an Orthodox church founded in the US. “What happened is contrary to the nature of Armenia-Russia relations, and it’s possible that for this very reason what happened seems like savagery,” he says, taking his remarks to an illogical level.

Heavy artillery of Russian propaganda Vladimir Solovyov tells his million viewers, “I express my sincere condolences” (as if being insincere was also an option and saying so on air). Then he says “the brotherly Armenian people” and “the great Armenian people”.

Clearly, when pain and the demand for justice dominate, choosing words is difficult. It’s better to do this in the media without unnecessary and meaningless remarks.

The shooting of a Gyumri family is a serious crime, and the Republic of Armenia and the Russian Federation in this case are not “brothers” and “age-old friends” but states that have a partnership relationship.

After all, friendship is not defined (this likewise is a point of view), while the Constitution and treaties are documents on which to rely upon.

“Vladimir Putin expressed confidence that all the investigative work will be carried out in the shortest period of time and the guilty will be punished under the law,” reads the official statement [RU].

“Putin assured that the perpetrators of the Gyumri tragedy will be punished” was the headline of an article published by Itar-Tass news agency.

“Don’t worry, this crime will definitely be solved…. No fact will be concealed,” continued Vladimir Solovyov.

These claims by the Russian media first of all raise questions concerning the words “promised” and “expressed confidence”. Why should the country of the man accused of the shooting provide assurance and promise the other party to punish the guilty and to do so in the “shortest period of time”?

Appeals not to politicize the crime, not to inflame passions, and not to undermine the age-old friendship between Armenia and Russia fit very nicely among the rules of propaganda journalism.

And if the crime in Gyumri is to be constantly mentioned with the word “tragedy”, then it would be better for it to also have the cleansing that is part of tragedy. And that cleansing must begin by extending condolences to the Russian media that spreads frontal and dangerous propaganda. And putting it to rest.