Documentary Film: A Window to a Visual World 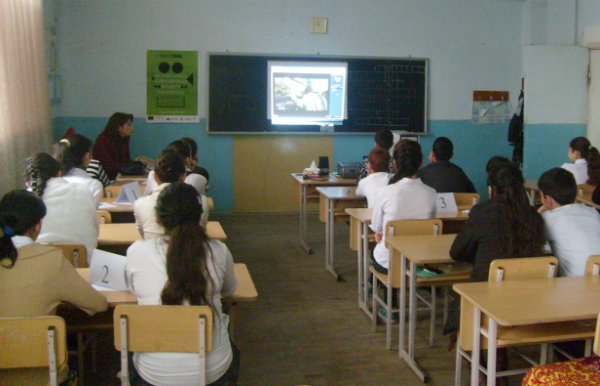 Various educational innovations and extracurricular activities are designed for children and youth — the generation that is searching for its place in society and trying on various behavioral models. Contemporary education, after all, places importance on not only purely theoretical knowledge, but also its real possibilities for application — especially if the matter is related not to mandatory school subjects, but to more global issues — the protection of human rights, the search for self-expression, the shaping of civil society.

What helps in this case is humanity’s accumulated experience, which is best communicated through documentary film.

Film is that type of art form that, through its ability to travel quickly, can easily take the viewer from one continent to another, tell various visual stories, and go on excursions to the world of customs, ideas, scientific and cultural heritage of thousands of nations around the world.

But apart from purely cognitive significance, documentary film is capable of fostering discussion, teaching how to ask questions and formulating them properly, and searching for possible answers; that is, turning the emotions felt from the film to life experience.

Childhood and adolescence is the time when radical and fateful discoveries are made (intellectual, emotional, and physiological).

Childhood and adolescence (particularly the ages of 10–16) is not paradise at all — it is a time to study the world, find one’s place, and make a choice. And that is always painful. It is the teenager that faces the most intense and even terrifying challenges and becomes witness to the injustices, fears, struggle, and miracles of the world surrounding him.

A selection of documentary films done prudently can become (and in many countries, do become) the stuff from which a child forms his own worldview, and learns to compare, evaluate, criticize, and sympathize. That is, he acquires all those qualities, due to which later shapes a society that has a high level of intellect and well-being.

Generally, any educational subject is more easily absorbed if not only textbooks, but also multimedia tools are used. Students always digest more quickly and remember in the long-term visual material — especially material that apart from being informational is also emotional.

Documentary film is that necessary component that allows to simultaneously waken and manage one’s emotions (which is simply necessary at that explosive age). Watching a documentary film, a child gets her dose of the world’s wisdom, tragedy, and charm, and learns to resist and be inspired — and accept that our enormous and diverse world often develops with different dramaturgical turns, and every human experience (even dramatic) is unique.

Documentary film with its real people and situations is a window open to the world, from which often by watching it, a child is released from indifference, which at a more mature age turns into infantilism. And if we accept that the main task of any educational system is to foster thinking individuals who are concerned with the planet’s problems, then introducing the screening and discussion of documentary films into the educational system is a very practical and promising step to reach this goal.

This is that tool that completes any educational program, showing (on the basis of specific human destinies) what are the advantages of goodwill, faith, struggle, justice, and being informed. In short, all that which the child will be confronted with during his entire life.

Seeing heroes facing circumstances and defending their views in various situations, the child inwardly prepares to accept the world with its different problems and in its beauty.

And what’s important is that viewing films allows him in all the noise to pause for a moment, plunge into, and become a participant in the flow of faces and events occurring in various corners of the world. To understand that he is not alone.