Protests in Thailand, While All is Calm in Armenia 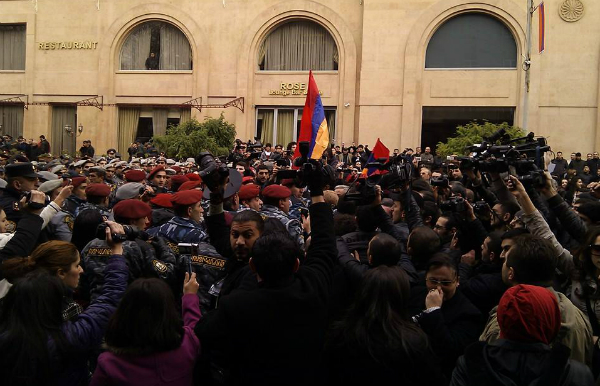 On Dec. 2, the news in Armenia mainly and mostly was comprised of scenes of the official visit of Russian President Vladimir Putin and his large delegation.

In both live streamed and later broadcasts, viewers could see Putin and Armenian President Serzh Sargsyan, who were making speeches from various platforms, visiting the military base, a forum, monuments, and so on. That is to say, they were doing all that which was planned and according to protocol.

Many of us already consider it normal that television news is itself a protocol and the news programs of different (including private) channels by and large differ from one another only by nuances. More often than not they don’t even have the desire to differ, limiting themselves to disseminating only official information.

And if official bodies don’t want to see on air news that’s unpleasant for them, well television then simply doesn’t see it.

On Dec. 2, along with unprecedented efforts to welcome Putin safely and according to proper conduct (the quickly and newly paved roads, the en masse “unloading” of people and cars in Gyumri and Yerevan), there was also a demonstration against Armenia’s joining the Customs Union, in which police detained 110 people.

Armenian television, however, either remained silent about this or simply reported the police statement that the march was declared illegal.

The Public Television of Armenia in its main news program, for example, reported in detail the list of official events, then mentioned the wave of protests against the Customs Union in Ukraine, and finally recalled one other protest demonstration which took place in… Thailand. According to the state broadcaster, in Armenia, everything was peaceful and solemn, and there were no protests.

Armenia TV reported the protest demonstration without video coverage — with a single photo and the police statement. It used the abilities of its highly equipped studio to simultaneously show the police statement on the screen and have it read by the news broadcaster.

ArmNews reported [AM] the march extensively — again putting the emphasis on the police statement and the actions of the police. It’s interesting that the anti-Putin signs could hardly be seen (clearly shown were the “Dignified Armenia” sign and the national flags, which basically didn’t contradict the idea of the high-ranking official’s visit). “Thanks” to this editing skill, it wasn’t clear what purpose or in the name of what this march was for, the participants of which were later detained in large numbers.

In Armenia, social protest movements either rarely make it to the (television) screen or undergo such editing that even their message can be twisted.

Kentron TV, for example, covered the march briefly, showing a group of demonstrators walking in a disorganized fashion, which left the impression that the march was small. And of course there were again references to the police statement and the role of the police. And then protests in Thailand.

International media (Euronews, the BBC [RU], and others) used images from the protest march, while even speaking about Russian television is difficult, since Putin’s visit to Armenia was an opportunity to remind people of Russia’s imperial dreams and ideology — especially since it’s been a few days that the struggle against joining the Customs Union has not ceased in Russia’s “target,” the Ukraine.

Armenian television, too, with great pleasure and willingness shows the “Euromaidan” scenes — but it doesn’t consider what happens in its own country worthy of attention.