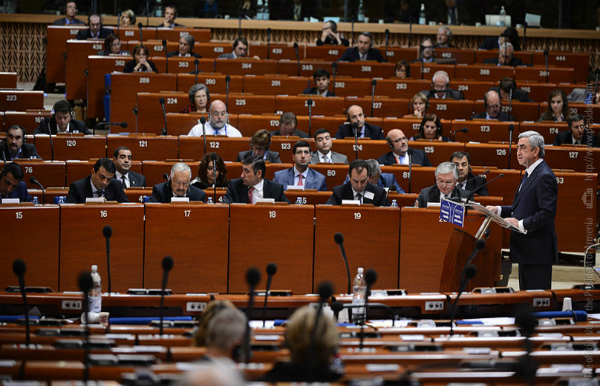 Heritage Party faction MP Zaruhi Postanjyan directed the question about losing enormous sums of money in a casino to Armenian President Serzh Sargsyan in Strasbourg. I don’t want to get into whether that question should’ve been raised there at all or whether that was the most important issue of the day.

One more question: and where could reporters ask Armenian President Serzh Sargsyan that question? In practice, nowhere.

I go to the interviews and press conferences section of the Armenian president’s official website. Here are the first few headlines:

“At the meeting with the representatives of the mass media, Presidents Serzh Sargsyan and Alexander Lukashenko recapped the results of the negotiations“

Serzh Sargsyan responded to journalists’ questions either after official meetings abroad or after negotiations with partners in Armenia. Clearly, in such cases, the time for the question-and-answer period is quite limited, and the number of journalists at the briefing, even more so.

The Armenian president prefers to speak with the public by way of speeches and statements. This is the format chosen to respond to questions that are important to the public. There are exceptions, when there’s a need to respond quickly to an incident, and Serzh Sargsyan gives an unforeseen briefing in Armenia. This is what happened, for example, when there was something urgent to say about Hungary and Ramil Safarov.

It’s obvious that Armenian President Serzh Sargsyan is not in favor of open, public press conferences. Journalists’ last opportunity for direct contact with the president in public were the presidential elections earlier this year, when Sargsyan was also a candidate. The most memorable response to a reporter’s question was his statement “We’ll stamp as much as you want” [AM] (Sargsyan was asked his opinion of his chances of securing votes in Shirak marz. His response implies that he can produce as many ballots as necessary for a presidential win).

It’s become customary that either head of the Republican Party of Armenia parliamentary faction Galust Sahakyan or National Assembly Vice-President Eduard Sharmazanov respond to journalists’ questions. An exceptional case breaking this tradition occurred on Sept. 4, 2013, when so much importance was placed on Armenia’s wish to join the Customs Union that the first to comment on it was head of the Armenian presidential staff, Vigen Sargsyan.

You wouldn’t consider the president’s March 2013 post-electoral meeting with members of the news media “open”. The group of participants was selected and strictly limited. And, by the way, after that meeting, the president expressed hope that there will be opportunity in the future to regularly have such meetings and discuss issues. Six months have passed. There hasn’t yet been an opportunity.

Perhaps it’s time for Serzh Sargsyan, president of Armenia since 2008, to hold a press conference that includes the widest possible range of news outlets. I don’t think that speeches and briefings with assumed questions are enough for the president to express his thoughts to the public quickly and around issues that are not so different from one another.

Spot-on questions on issues of the day are permanently absent — perhaps also because the platforms and opportunities to ask questions are not being used.