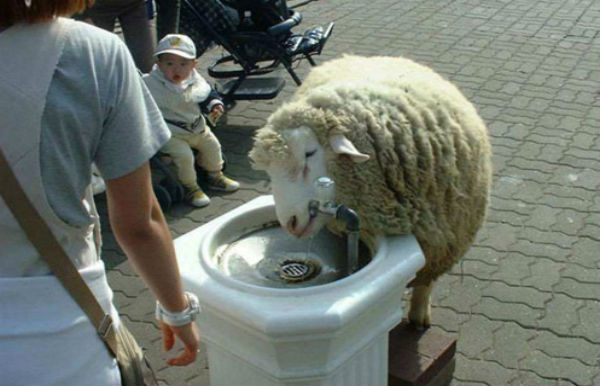 Everyone, it seems, is not only a medical, but also a media expert. And judging from the number of people who “suggest” master classes to us, we journalists sometimes feel like that grey-haired violinist who was led by 49 conductors (though he was the only musician).

We are taught what images we can publish. For example, recently, I understood from a thread on a Facebook group for Armenian media professionals that if two athletes in a wrestling match are suddenly caught in what might appear to be a sexual position though the athletes are dressed and are clearly not engaged in “that act,” it would be better not to publish those photos.

I’ll be damned if the Internet is not full of such images, where during a match a hand appears “right there” — all of a sudden the athletes’ positions are said to surpass even those illustrated in The Kama Sutra.

I understood that in publishing the almost-daily announcements of temporary interruption to the water supply of a Yerevan neighborhood, you tire of publishing the Yerevan Djur logo, “there’s no water” posts, or photos of people carrying water, and sometimes your piece is accompanied by a photo of animals drinking water, you can publish a photo of a parrot, dog, or cat, but if you suddenly publish a photo of a sheep drinking from a drinking fountain, you will receive a flood of insults: “You’re the sheep” and “You consider consumers sheep, do you?” As if until then we considered consumers dogs. Or if we published a photo of a cat drinking water, then as if consumers weren’t even worthy of being considered dogs.

I understood that though reporters covering a press conference identify guests as they were described in the press invitation, it’s wrong: you have to ask them for a copy of their certificate or diploma from a higher education institution — and evidence of two guarantors is even preferable. Or you’ll find yourself in the middle of such an absurd story as happened in identifying Elya Hovhannisyan as an astronomer.

We are taught which events, with the participation of what number of people, can be covered. For instance, how irritated Yerevan City Hall was that we reported almost daily the demonstrations outside their building, in which mainly 3 people participated. Or, how some Armenian National Congress (HAK) youth were vexed that we wrote about the petition against HAK leader Levon Ter-Petrossian, which only 7 people had signed.

Your hands are itching to write in response, how every Friday, when you gather outside the general prosecutor’s office and we dutifully report it, why don’t you turn around and count the number of people present — or ask, don’t you pity Vardges Gaspari, whose solo demonstrations, according to your scale of measurement, should never even be covered?

But it’s understandable: politicians, in particular, criticize news outlets not because they don’t sleep at night from being concerned that journalists write good quality and ethically impenetrable news stories, but, accusing them of selling out and other deadly sins, they cherish secret hopes whether they’ll force news outlets to avoid covering topics not agreeable to them or they’ll compel them to cover issues only from a perspective thats favorable to them.

But sometimes, your nerves just can’t take it anymore. When, say, giving journalism ethics classes is the editor of the most disgusting newspaper in Armenia’s media history, who became famous for publishing collages of naked government opponents — with qualifying remarks that exceeded all boundaries of courtesy.

You are filled with doubt when giving journalists lessons and master classes in a teaching tone are girls and boys to whom the first questions you want to ask are “Dear child, who are you? Have you written a single article in your entire life?”

Your nerves can’t take it when even a person considered principled and progressive accuses you of maintaining “olympic silence” in not covering a particular press conference, but when later he discovers that, in fact, you did cover it, instead of deleting the post with uncalled-for accusations and the offensive comments beneath it, he begins to simply complain of the quality of the coverage.

You think, if this is how a person in the profession having the facts behaves, what can you expect from others?

What to ask of the young activist who without even paying attention to where the closing quotation marks are located (that is, where another’s direct remarks come to an end) wants to settle the score with the news outlet for the criticism directed at him, threatening a boycott?

And sometimes you think, we criticize the ruling authorities for controlling some of the local news outlets, while having a similar aspiration for the rest. Can you imagine — if each one of those mentioned above who complained had even a small amount of power how he would apply it?

You think, they simply didn’t have any luck: they were born a bit late and lost the chance of working at Glavlit [General Directorate for the Protection of State Secrets in the Press under the Council of Ministers of the USSR; i.e. Soviet censorship bureau], to dictate what headline to publish or not publish, what and how to cover and not cover.

All of this might leave the impression that we’re intolerant when it comes to criticism and we don’t want to accept it. Not at all — we are ready to discuss any fact pointing to inaccuracy or inadequate media literacy. But we would prefer if it was not hostile and delivered at least in a calm tone.

A word of caution: irrelevant criticism and undue interference are dangerous to your professional activities also because you might “throw out the baby with the bath water” and learn to ignore any criticism that is directed at you — even that which is due.

We ask our critics, don’t become a modern-day Glavlit. Without that, there is no lack of internal and external censorship, and there’s no need to create a new platform for censorship — especially by way of Facebook.