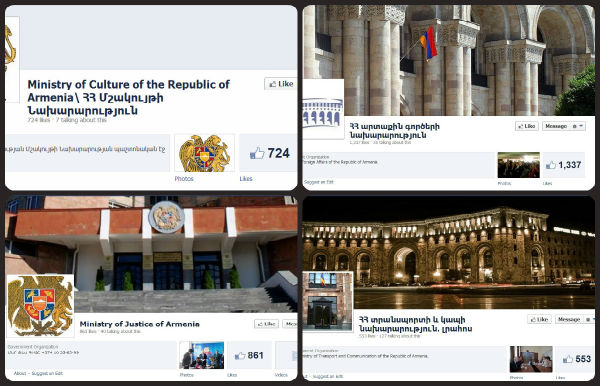 To what extent are Armenian state agencies today engaged in social media? Considering the preponderance of social networks in public and political spheres, one might get the impression that state institutions are actively making use of these platforms. However, that’s not quite the case.

State officials either don’t particularly want to be on social networking sites (SNSs) or don’t manage their pages themselves. In many cases, this role is assigned to a press officer or other representatives, who begin to represent their agencies on SNSs. High-ranking officials are rarely on SNSs.

From government, an exception is RA Minister of Education and Science Armen Ashotyan, who, it can be said, among Facebook users in Armenia today, is the user with the largest fan base — 4,900 friends and more than 11,000 followers.

In instances when a Facebook page is managed not by the political figure himself, but by his staff, then first place goes to Yerevan mayor Taron Margaryan, who has more than 13,000 followers.

Yerevan City Hall is active on not only Facebook, but also Twitter. Moreover, all of the Armenian capital’s administrative districts have their own Facebook pages, which are constantly updated — for example, Kentron (center) or Ajapnyak. Here, there are also instances of the incorrect use of Facebook; for example, Shengavit administrative district has not a page, but a user profile.

Armenian Prime Minister Tigran Sargsyan was the most active political figure in social media a few years ago: he was one of the first prime ministers in the world who had his own blog, which was later moved from LiveJournal to a website but has lost its blogging voice, sounding more official.

The PM also has a Twitter account, though it only tweets updates from the website. In addition, Tigran Sargsyan has his own personal Facebook page, which, though has 13,869 “likes”, has only 87 people who are “talking about this”.

The Press Center of the Government of the Republic of Armenia‘s television program Hraparakum (“publication”) has not only a YouTube channel, but also a LiveJournal presence.

The RA Police’s official  YouTube channel, with its more than 500 subscribers and views reaching 2 million, is perhaps the most watched channel among Armenian viewers.

Conversely, the RA Prosecutor General’s YouTube channel has only one subscriber and just more than 1,000 views.

Not to be left behind, the RA Ministry of Justice has a Facebook page, a Twitter account (but lacking a profile pic), and a YouTube channel (7 subscribers; only more than 1,000 views), though public interest is quite low.

The RA Ministry of Defense’s YouTube channel hasn’t been updated for a month; it has 32 subscribers and about 17,000 views.

Though it doesn’t have many likes, the RA Ministry of Transport and Communication’s Facebook page is constantly updated with new content, while its YouTube channel hasn’t been updated for 3 months (it has 1 subscriber and around 1,000 views).

The president’s press office has a YouTube channel, which was launched on April 2012. It has 290 subscribers and more than 300,000 views. Its Armenian-language Twitter account also has Russian-language and English-language feeds — but they are completely empty (no tweets in Russian or English yet). On the website, there’s a link to a Flickr account, which is likewise empty.

One also comes across oddities; for example, on the official website of the Customs Service of the Republic of Armenia, one can find logos of several SNSs — which simply link to the main page of those sites and not to a particular account.

It’s the same with the Tax Service of the Republic of Armenia: only two of the logos actually link site visitors to the Tax Service’s page on Facebook and LinkedIn. For some reason, there’s also a link to the homepage of MySpace, a social networking site not well known in Armenia.

In general, state agencies don’t harness the full potential of social media, using it mainly as just another platform to publish press statements.

It should be noted that this is not a complete study. One of the problems is that state departments, having a social media presence, don’t include links to their social media accounts on their official websites, which is why it’s often difficult to find them, and in the case of finding them it’s hard to know for sure if they are official pages.