All Quiet on the Set: How a Fire in Downtown Yerevan was Ignored 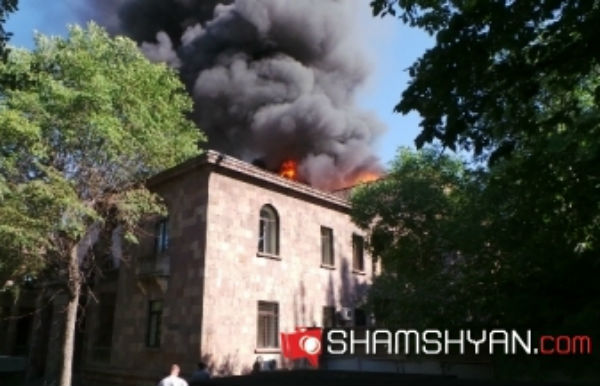 One of the functions of a news outlet is providing timely and accurate information on news of public importance or that is of danger to the public. Let’s accept this as a working hypothesis.

We assume that if a news outlet has a newsfeed, then that is one of its main functions. This is proven by the fact that when we hear rumors of something happening, the first thing we do to confirm the news is turn on the television or visit an online news site (depending on our preference).

Let’s now turn to a specific incident. On Sunday, there was a fire on Baghramyan Ave. in the center of Yerevan: the roof of the Union of Architects of Armenia building was burning. Let us agree that a fire in the city center immediately raises several public concerns.

On one hand, there’s the danger of the fire spreading, and most likely, the public needs to be informed. On the other hand, disseminating information that hasn’t been verified might lead to panic, and the journalist’s task is to disseminate verified information.

It’s clear that the first during such incidents today might be not the traditional news outlet but the citizen journalist, or, put differently, the Internet user. In this case too, the initial news appeared on social networking sites — Facebook, Twitter, Instagram.

Silver (@sssilver) tweets the news two minutes after the Ministry of Emergency Situations gets the call.

It was difficult to tell from the photos where the fire was. The possibility of the National Assembly building burning was also being discussed at that time. You have to agree that in many countries, if news spread that the parliament building or a building in its vicinity was on fire, the number of journalists on the scene would immediately and sharply increase. Let’s see what happened in Yerevan.

In this case, the Ministry of Emergency Situations was timely: it immediately issued a press release and updated its website. Later, photos from the scene were also uploaded on the ministry’s website. Such prompt action on the part of a state agency is worthy only of praise.

But suddenly it became clear that it was a Sunday — when many news outlets in Armenia simply don’t work. Some only work in the afternoon, and their newsfeed was no longer updated after 5 pm.

Armenpress, Shamshyan.com, and Hraparak (the list might be incomplete): these were the main news outlets that published timely information, comprised of not only the ministry’s press release, but also their own content.

Several other news outlets simply republished the ministry statement or the report from Shamshyan.com — a majority did so after the fire had been put out; that is, when the news was already of little public importance.

This incident showed that, in general, the news media in Armenia, particularly its most timely online sector, is not prepared to provide information on a time-sensitive event.

You’ll say, but it wasn’t a particularly serious incident. However, a fire is that incident whereby in a matter of minutes can become a disaster threatening the lives of many. It isn’t for naught that we have to yield first to firetrucks and only then police cars and ambulances.

And when such an incident happens in the city center, a news outlet has numerous opportunities to get details outside of the Ministry of Emergency Situations’ press statement, beginning by sending a journalist to the scene up to finding someone in the vicinity by calling or scouring social media.

There’s the impression that if aliens plunder and loot the Mashtots Institute of Ancient Manuscripts (Matenadaran) on Sunday evening before a Monday holiday, we will know about it only on Tuesday.