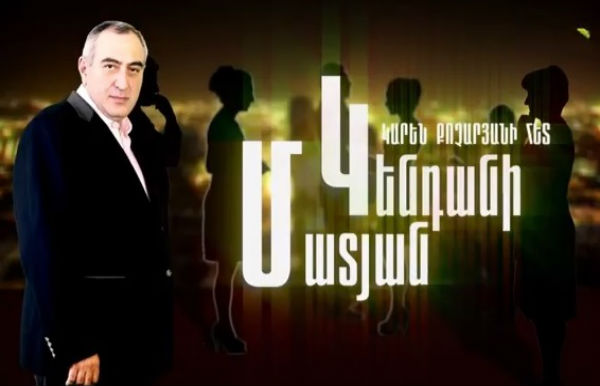 The Caucasus Research Resource Centers‘ Armenia Country Director Heghine Manasyan is one of those rare people whose remarks are a pleasure to listen to, regardless of whether you agree with them or not. She always brings forth unexpected and interesting professional approaches, and this was why I decided to watch the Armenia TV program “Live Journal” on May 22, the episode in which she appeared and which was dedicated to the issue of emigration.

First, let me say that I watched this program for the first and, apparently, last time. That which was happening on screen you wouldn’t call anything less than “stylistic okroshka” (a yogurt drink full of diced cucumbers and dill).

Obviously, every program will have a concept on content and at least some notion of what genre it belongs to (news, analysis, cultural, entertainment, sport, and so on), what issues it tries to address, and with what ideas it presents itself to viewers.

These conceptual and content approaches are what basically shape the whole style of the program. They also determine the choice of host, including his appearance, dress, pronunciation, experience; the design of the television studio, from the type and arrangement of the chairs to the colors of the walls and floor; the choice of music; and an assortment of technical tricks.

But in “Live Journal” everything is disorienting. The program opens with anxiety-inducing music and visuals, which evoke direct associations with the program “02” from my childhood and a little bit with the popular show “Who Wants to Be a Millionaire?”

Then, on the backdrop of a nighttime view of Yerevan, we are presented with a man wearing a suit reminiscent of some college uniform with “Don Corleone-ian” claims and “good boy” gestures, who slowly, each word clearly separated from the next, recites the following sentence: “If Shakespeare’s Hamlet was written in Armenia today, the famous soliloquy would be heard as follows: To go, or not to go, that is the question.” He recites it in a way that at that moment you want to interrupt and say, “And now, attention, the question…” [A reference to the Russian-language popular game show “What? Where? When?“. The host of the Armenian production of this show is also the “Live Journal” host referred to here.]

After presenting viewers with the program’s guests, we are finally invited into the studio. And oh, what a pleasant revelation, the studio is also in the style of the good ol’ familiar “Ugolnikov/Urgant Evening Show”. In the left corner, for some reason, sits a black grand piano. At first you think, it’s probably a requisite [prop] left over from some entertainment program, or simply “perchance the piano came with it.” But a few seconds later, the melancholic sounds of the piano cast away all doubts.

At the moment when the host literally says, “This matter is also politically speculated, speculating the speculated; the problem exists and is a serious problem; it’s just that till today they’ve spoken about it, simply by identifying it, that it exists. We want to discuss about many more problems: why is there emigration? And why not, also about solutions, solving this problem. And I would like to hear all of your opinions on this issue, what are the problems; we’ll talk about the solution during the program,” a soft and lyrical piano tune is heard in the background, much like that heard in the foyers of the best European hotels and restaurants.

And almost the entire program carries on like this. At one point the music stops (probably they give the piano player a break), but it resumes from the 19th minute and continues till the end. What the purpose of this musical composition is and what it has to do with the issue of emigration remain a mystery for viewers.

Next: During the entire program, the host both during his own quite lengthy monologues and in discussions with invited participants saunters behind the guests. To tell the truth, I don’t know from which foreign channel they “cooked up” this innovative method, but for the viewers it’s absolutely incomprehensible how the host communicates with those in the studio.

I’m sure this seemed unusual and uncomfortable also for the guests. In my opinion, the program’s unnatural atmosphere, where people speak one at a time and there is almost neither a debate nor a real discussion, is also attributed to this unsuccessful choice of method.

Apart from all this, if we speak purely about the program’s content, then it’s clear that the editors and the host have failed to do their homework. Judge for yourselves: Why invite a professional of Heghine Manasyan’s calibre and other respectable speakers if, as a monologue (yes, this is a monologue and not a question), you are going to cite the following thought heard in any taxi in Yerevan (at minute 20):

“And the most important, what I… with what I became convinced, because I recently returned from the United States, yes, in a powerful country like the United States, can you imagine how many, say, millionaires there are? Trumps, yes, Rockefellers, Murdochs, and so on, and so on, against whom our oligarchs aren’t even small businessmen. But there, if someone dares, no matter how much money he has, no matter how much power he has, to break the law, the smallest traffic rule, I won’t even talk about bigger, more serious crimes, they won’t say he’s an oligarch or he’s a Member of Parliament or he’s this or that… there’s a court, a trial, and there is equality before the law. Isn’t this issue important for us here from the point of view of emigration?“

For the most part, the program was saved by the guests, who, despite weak and trivial questions, expressed interesting ideas and judgments.

In conclusion, I want to state two short considerations: First, I would like to recall this recently published article “Our Words Betray Us” [RU] and assure you that in all cultures, civilized and educated people first of all garner our attention with their competence in formulating their thoughts in their native language, with intelligent utterance and articulation. And second, I would like to highlight the importance of associative thinking and perceptions for the television format.