What was the Purpose of Prince Charles’ Visit to Armenia? 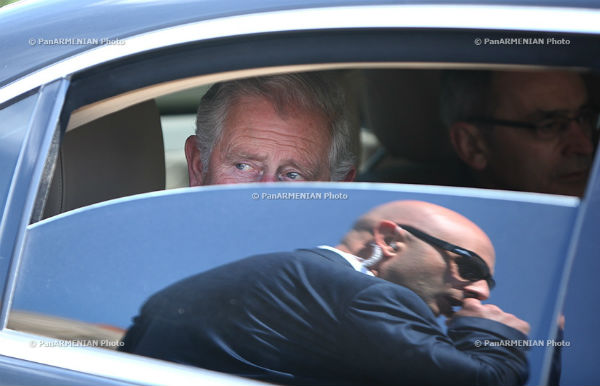 This question was an unsolved mystery over these past few days and complicated the work of local news media, inadvertently inciting them to produce a vague and confusing stream of news.

On Republic Day, May 28, the visit of His Royal Highness Prince Charles of Wales to Armenia was represented in diverse contexts: political, social, cultural, ecological, culinary, educational, touristic.

Different news outlets selected the context that was most convenient and suitable to their media owners. And we, ordinary news consumers, never quite understood what was the real reason for Prince Charles’ visit and what his next steps will be.

According to an official statement, the British heir apparent had come to Armenia on private business, invited by Armen Sarkissian‘s Yerevan My Love Charitable Foundation.

From this statement, it became clear that it was a charitable visit; however, there was also the news of the foundation’s connection with the mining project in Amulsar, particularly with the extraction of gold. In this context, the presence of a member of the British royal family in Armenia was perceived as an intention to promote gold mining operations.

Especially when it became known that apart from Yerevan My Love Charitable Foundation, Armen Sarkissian is also a board member of Lydian International, the UK-based company given the mining rights to the Amulsar project.

From May 28 to 30, Prince Charles went to a concert and the Matenadaran (the Institute of Ancient Manuscripts); saw churches; met with the president and the Catholicos of All Armenians; tried national dishes; and received an open letter from environmental activists, who waited in vain outside the Matenadaran, wanting to talk to him personally and inform him of the environmental damage and legislative issues of exploiting the gold mine in Amulsar.

Some news outlets covered this story (RFE/RL’s Armenian service Azatutyun and the BBC’s Russian service), while others, without hesitation, avoided the problematic topic.

In the end, the extent and outlook of the connection between the gold mine and the prince remained unknown.

Also left unknown was why Yerevan My Love, dedicated to preserving architecturally significant buildings in the Armenian capital, didn’t invite Prince Charles to visit its upcoming projects — for instance, the dilapidated Yerevan neighborhood of Kond, where it plans to build a shelter for women and their children and a daycare center for deaf and hard-of-hearing children?

If the purpose of the visit was, indeed, charitable, it remained hidden to the public, since the British heir apparent appeared in the local news only in places not needing to be restored — the Armenian National Academic Theatre of Opera and Ballet, the Matenadaran, the Mother See of Holy Etchmiadzin, and the presidential palace.

In a matter of 2–3 days, the media was informed that the prince is ready to assist young entrepreneurs, to participate in educational programs [an alley in the yard of the Dilijan International School of Armenia (currently under construction) was named after him and a certificate commemorating this ceremony was handed to him by the school’s founders, Veronika Zonabend and Ruben Vardanian], to contribute to improving the living conditions of children with disabilities, to preserve architectural structures, and to support a program serving the needs of vulnerable families.

There was even talk of an intention to build a “Hay Park” (a national park) in the likeness of Hyde Park in London, which was to contain a museum of the diaspora and various other buildings.

We were told the Prince of Wales ate lamb chops, trout from Lake Sevan, and mushrooms, and that he doesn’t eat garlic [AM].

Armenia’s unique news channel, ArmNews, prepared a few interesting reports: on the eve of Prince Charles’ visit, the news outlet informed its audience that in England, they like to drink tea; however, tea leaves are grown not in the UK, but in India.

ArmNews, which works quickly and creatively, apart from this primitive and extremely long reportage, produced another efficient and original report [AM] that provided occasion for deep reflection.

From this reportage, for instance, one is immediately informed of two contradictory views stated by British officials. British Ambassador Extraordinary and Plenipotentiary to Armenia Jonathan Aves says they are impressed by the Amulsar mining project presented by Lydian International, while Yerevan My Love project press advisor Tony Halpin emphasized that Prince Charles’ visit was private and solely charitable, and not for practical matters.

Actually, this is that case whereby the news outlet alludes to an issue and places the surface matter and the subtext on one level. It doesn’t want to delve deeper into the issue but also doesn’t rule out the possible connection between the prince and the mining project.

And so, the media not explaining but implying, we began to surmise why the prince had come to visit us. And more importantly, why was no news outlet able to “catch” the prince speaking live and use it in a video?

If you noticed, the prince only spoke during closed-door events. Perhaps the member of the British royal family had nothing to say to us?